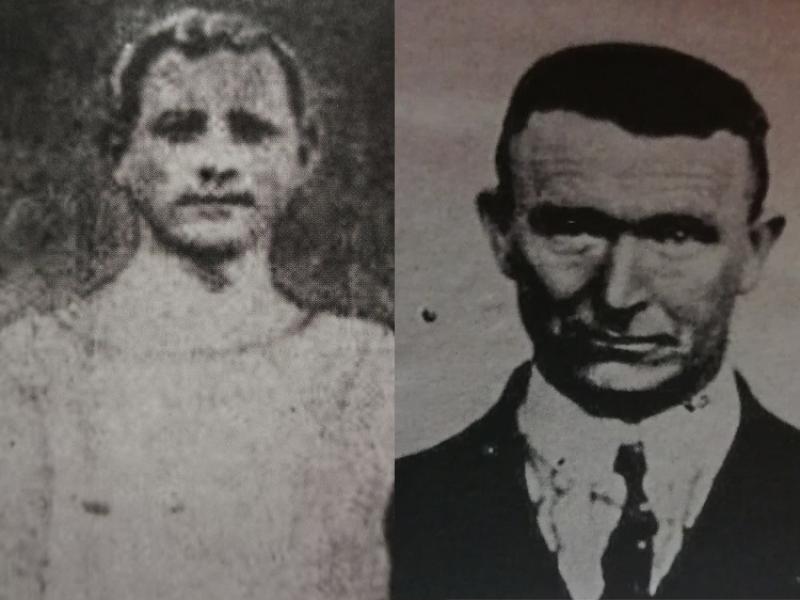 Left Jack Blackburn RIP at the height of his career. Right: Jim Fahey RIP in the early 1900s

I'm looking at two extracts from a book compiled by The Lisnagaul Memorial Committee and published just last year 'The Troubles In The Glen'. Its a collection of articles from Bansha/Kikmoyler, the Glen Of Aherlow and Galbally.

The extracts are about two men namely Jack Blackburn youngest son of Edmond and Mary Blackburn who was baptised on August 14, 1867 and Jim Fahey eldest son of Patrick and Eliza Fahey who was born on March 1, 1879.

You see Tom Blackburn founder member and coach of Mooreabbey Milers and international medalist, grandson of Jack and grand nephew of Jim didn't lick it off the rocks its in the genes.

By Jack Blackburns own admission he had an interest in field athletics from an early age. Jack's first appearance in public was at a place called Cappauniac near Cahir, where he found competition in opponents Alex Noonan and Owen O'Neill. Despite the competition Jack found himself vaulting at 9 foot 3' taking the laurels. On his second outing to Golden County Tipperary Jack jumped an impressive 10 foot 1' while in the long jump he cleared 21 foot, no easy feat for a man that stood only 5 foot 5'. Jack won senior national titles in 1892 1893 1896 and most notable in 1897 with a jump of 10 foot 2'. Jack spent some years in the USA and London winning several prizes in various stadia. On returning he married Elizabeth Fahey sister of fellow athlete Jim Fahey. At the age of 74 Jack Blackburn passed away on April 8th 1942 at his residence in Old Street Galballyand is interred in the nearby cemetery in Lisvernane.

Jim Fahey moved to the Corderry Galbally area with his family at the tender age of 4 years. Jim first came to prominence when he jumped 34 foot 2' at Galbally sports in September 1897 at 17 year's of age. Jim became Irish champion in 1907 when the Irish athletics championships were held in Thurles on July 28. On that day Jim won the standing hop, step and jump (long jump) with a distance of 9.56 metres and the three standing jumps (triple jump) with a distance of 10.72 metres. Jim spent the next 50 years in Chicago driving trams where he was nicknamed the Irish kangaroo. It was in Chicago on September 4, 1923 that Jim set an American and world record of 40 foot 3' in the 3 standing jumps (triple jump) at the age of 44 years. A monument to the late Jim Fahey stands in his adopted village Galbally the place he always called home.

AGM
The clubs AGM will be held via zoom on Saturday next January16, 2021.

Training
Unfortunately for the foreseeable future all training is suspended. We encourage all club members to keep up with their individual training within their 5k limit. Stay safe and we will see ye all back once we have weathered this storm.