Mooreabbey Milers AC looks back on what happened in 2020 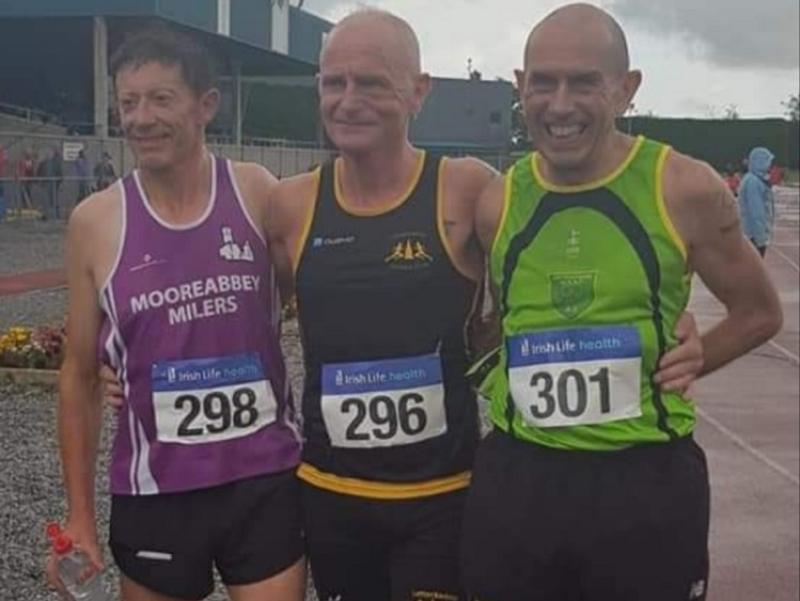 2020 has been a year like no other. 'Corona' 'covid' 'virus' 'Coronavirus' 'Covid-19' call it what you like, it has affected all our lives and lifestyles. It started out as a story on the news in late 2019 affecting China but on that special day every once in four our quant little Isle was rocked. Podded training, individual training, 5 levels, races, no races, large gatherings, small gathering, no gatherings, 2 meters, stay apart.

The mile challenge shield was retained at home with Team BPM with (Ben Cummins, Patrick Holian and Marie O'Shea) taking the honours.

We hosted the county senior cross country with medals all round for many of the clubs participating athletes. The lights became illuminated at the community field while I (Lynda Hynes) was voted club person of the year at the clubs award night in Ballylanders. Other award recepitants were

We had a ladies and 2 men's teams compete in the first race of the county road championships the novice in Moyne. More county medals in February as Stuart Moloney, Ben Cummins, Barry Hartnett and Ewan Cunningham became county road relay champions and Mary Louise Ryan, Martina Moloney, Patricia Ryan and Patricia Blackburn clinched the bronze medals in the ladies race.

The club hit national glory again when Tom Blackburn, Willie O'Donoghue and Damien Holian secured a national bronze as part of the county team in Wicklow at the national masters cross country. From cross country to the indoors in the heights of storm Ciara and Denis Nenagh indoor stadium was the venue for the Munster indoor track championships. Again the pockets were laden with medals as Ben Cummins, Willie O'Donoghue, Larry O'Grady and Mary Louise Ryan ran, walked and jumped away with 8 medals. The 24th of February bought us the sad news that we had lost our dear friend Catherine Hogan. A lady with a heart of gold. RIP Catherine.

And in the junior / juvenile section Cormac and Gearoid Kinnane, Ryan and Ruairi Cunningham, Kitty and Tessa O'Dwyer and Doireann and Nessa Moloney.

The next 3 months were to be the hardest. A blanket ban had been called on all activities. Restrictived movements, self isolation and social distancing. No races, no training, stay at home stay apart!

The 17th of June bought some normality back with podded training permitted and group activities looking likely to happen. IMRA Munster returned with runs on Carrauntoohil, Galtymore and Seefin. Mad men Kevin Lenihan and Jason Collins took on the 200 kilometre Kerry Way Ultra while Barry won the Kerry Way Lite. All Ireland headline for Larry O'Grady and Willie O'Donoghue as Larry takes silver and Willie takes bronze and a 5k track PB at the 149th Irish Life national championships in Morton Stadium in Santry Dublin. Tom Blackburn took 3rd in the Knockmeldows half while Willie O'Donoghue competed at the senior and novice open cross country in Galway.

Cross country was making a welcome return starting with the novice in Newport. Barry took an individual bronze in this one while the men's A team Barry Hartnett, Kieran Lees, Ewan Cunningham and Willie O'Donoghue took the silver. Alas this was to be the first and only race of the 2020 cross country season to be ran as infection rates crept up and the government imposed a second lockdown placing the whole of Ireland into level 5 the highest and most restrictive of our 5 tiered plan.

We're two weeks+ into 2021 and we are still sailing in the same boat as we left 2020 in, but the light at the end of the tunnel is beginning to shine a little brighter, so hopefully in the months ahead we will see some sort of normality return to the athletics community.

A special thank you to The Avondhu, Vale Star, Tipperary Star, The Nationalist, The Limerick Leader and Stevie O'Donnell of Tipperary Mid West Radio for their continued coverage of the club and athletics.

Congratulations and well done to all who accomplished many achievements in what was 2020. Hope to see all old kin and newbies back on the roads, fields and hills soon.

The clubs AGM was held last Saturday night via zoom.

The following committee members were elected.

Thank you to all those who are retaining or changing their roles for the year ahead.

Many thanks to the outgoing members for their hard work and dedication throughout their term of office and a thousand welcomes to our new members.