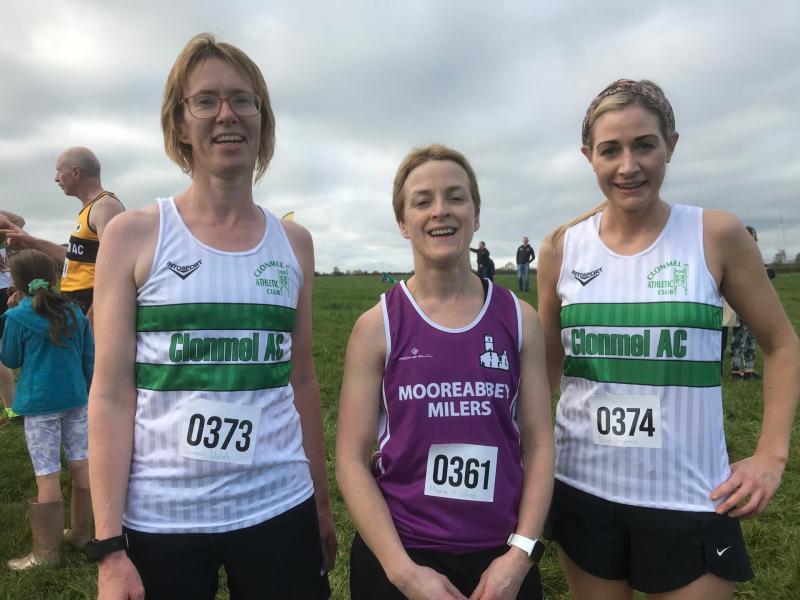 The County Novice B Cross Country Championships took place today in summer like conditions with warm sun and firm footing the order of the day.

Competition in both the Women’s and Men’s races was very competitive. In the women’s race 4 clubs were well represented. Right from the start a group of four athletes went to the front that included Sareen Walsh of Clonmel, Edel Delaney of Moyne and the Mooreabbey Milers duo of Maire O Shea and Deirdre Baily. Then with two laps to go Sareen Walsh increased the pace and soon she and Marie O Shea opened a lead on the rest of the field.

They increased that lead on the 2nd lap and going out on the final lap the title was between these two athletes. Then with 600m to go Maire increased the pace and soon opened a gap on Sareen, a lead she held all the way to the line to come home a very worthy and convincing Champion. Then we had Sareen Walsh maintaining a strong pace to win the silver medal.

The tussle for the bronze medal was only decided in the last 300m with Brid Hearne of Clonmel coming through to finish 3rd with Deirdre Baily of Mooreabbey Milers 4th, these two athletes had great performances. For the record Mairead Julian of Dundrum was 5th with Edel Delaney of Moyne 6th. In the team event with Marian Flaherty finishing 7thand along with Sareen and Brid, Clonmel were convincing winners of the gold medals on 12 points. The silver medals were won by the Mooreabbey team of Maire, Deirdre and Trish Ryan on 15 points. The Dundrum trio of Mairead Julian, Stephanie Moore and Laura McCarthy Armstrong won the bronze medals on 22 points.

The men’s race was also very well supported with 6 clubs represented. Here the early pace was set by a group of athletes that included Tim Treacy of Carrick on Suir, the Mooreabbey Milers duo of Ger Hanley and Kevin Patrick Lenihan, Michael Carey of Templemore and the eventual Champion, Jody Sweeney of the host club. Then midway through the 6k race the leading group was down to three with Jody Sweeney setting the pace along with Michael Carey of Templemore and Kevin Patrick Lenihan of Mooreabbey Milers.

At this stage, the team event was very close with just one point separating Moyne and Mooreabbey Milers, so all to run for. Up front Jody Sweeney was making every stride a winning one as he increased the pace to come home a very worthy and popular Champion in front of the home crowd.

The battle for the silver medal was decided on the last lap with Kevin Lenihan going clear of Michael Carey of Templemore with both athletes giving it everything over the final 300m. For the record Ger Hanley of Mooreabbey Milers was 4th with Richard Daly of Moyne 5th and Keith Fraher of Carrick on Suir 6th. With both Moyne and Mooreabbey Milers having two athletes home on a combined score of 6 points, all eyes were on the 3rd scorer from both teams.

With 300m to go Willie O Donoghue edged in front of Brian Carroll and despite a late challenge from the Moyne athlete Willie held on for 7th place and ensuring the gold medals and the Cup was Galbally bound with the team of Kevin, Ger and Willie claiming another title for Mooreabbey Milers, who have every men’s title up for grabs this year in the Cross Country, great credit to all involved. The Silver medals were won by the host Club with their team of Jody Sweeney, Richard Daly and Brian Carroll. The bronze medals were won by the Templemore team of Michael Carey, Tommy Gleeson and Michael Gleeson on 28 points.

The Count Chairman, Billy Purcell, thanks the Moyne club and indeed the landowner, Richard Daly for a great promotion of the Sport. He also thanks all the Clubs for supporting these Championships.

The blue-ribbon events of the Athletic calendar takes place in Santry Demesne on Sunday next. The County will be represented by two strong teams in the Senior Races. The Senior women’s race over 8k will see the County team of Siobhan O Doherty (Borrisokane), Dymphna Ryan (Dundrum), and the Clonmel quartet of Ciara O Neill, Moya Whelan, Hanna Steeds and Caroline Godard. The Men’s team will consist of Kevin Moore (Dundrum), Sergiu Ciobanu (Clonliffe Harriers), John Fitzgibbon (Thurles Crokes), Dermot Gorman (Carrick on Suir) an the Clonmel quartet of Sean Tobin, David Mansfield, William Maunsell and Evan Fitzgerald. Hopes are high of both teams doing well in the competition.