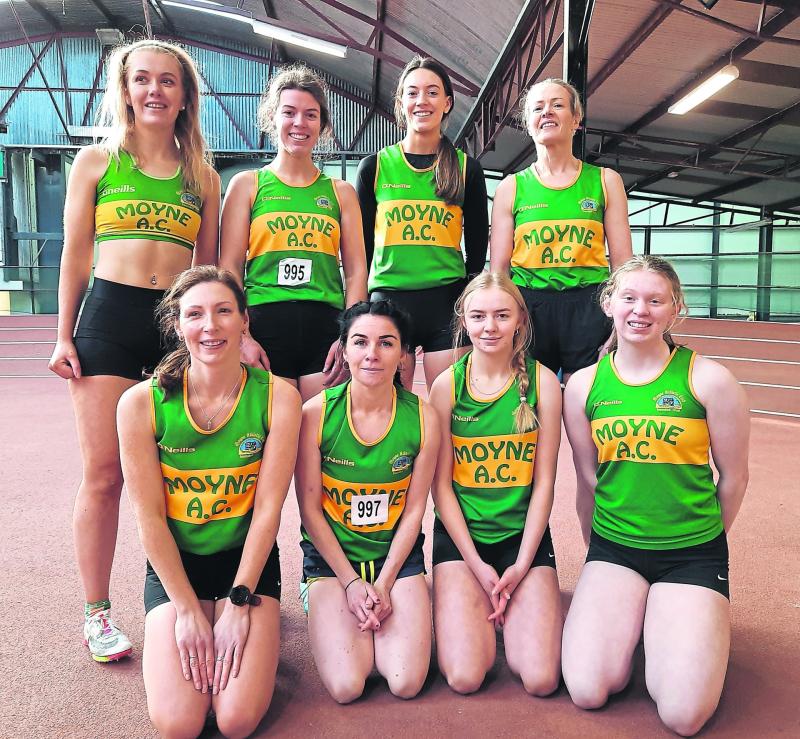 Photo of Moyne AC Ladies at the County Indoor Championships

After two years off the circuit, last Sunday saw the resumption of the much-anticipated County Indoor competition at Nenagh Olympic Stadium. Moyne A.C were represented by eight ladies who all got their season openers underway on track.

In the flying 60m we had Leona Maher and Aisling Dwyer in the senior event. It is evident that Leona has made significant headway in her development since the summer as she performed exceptionally well by placing 3rd overall in the event. Her time was 8.44. Aisling placed 5th with a fantastic time of 8:65 despite injuring herself on the dip at the finish. Bernadette Spillane was next in the blocks for her 60m event and again got her opener off to a good start by winning comfortably in 6.14.
The girls had not long to recover as all were out shortly after for the 200m and 300m. Leona and Aisling again showcased their experience and grit where they finished first and second in 28.45 and 28.97. Ber faced the starter for the 300m, not a traditional track event this side of the Atlantic but can prove to be beneficial to athletes to test fitness levels at this early stage of the season. Ber set out a target to run of sub 52 and indeed she delivered on that and won the race in 50.25 which translates to around 1.10 for 400m.

The middle-distance girls followed. The club were represented by Sharon Cantwell who finished 2nd overall in a time of 5:16.11. Sharon will represent Moyne AC at the NIA Live Series at the National Sports Campus on Wednesday evening next where she hopes to shave off another few seconds on today’s efforts. Sinead Tynan has been training consistently well over recent months and today was rewarded for her efforts as she gave an unbelievable performance by placing 3rd overall in 5:49 and winner of her category.

Lisa Quinlan had her championship debut today and had a great experience where she also was rewarded with a 3rd place finish in a time of 5:58. Great job Lisa!

Final event on the track was the 4x200m relay where the above-mentioned ladies plus the fresh legs of Lucy Doyle (her senior indoor debut) and Aoife Dwyer made up the quartet with Leona and Aisling. Their opposition was Nenagh Olympic and the second Moyne A.C team of Ber, Sinead, Sharon, and Lisa on the anchor leg.

A great event as always to conclude the programme and a brilliant performance by Aoife, Aisling, Leona, and Lucy where they finished second in a time of 1.58.87 just behind the Nenagh girls who finished in 1:55.40. Moyne B team finished in 3rd place in 2:12.69.

Credit to the girls for their efforts and many thanks to Nenagh Olympic and the County Board for facilitating the event despite the disruption and ongoing plight of COVID. A special thank you to the officials who made the event possible, in particular our own club members; Paddy Doyle, John, and Martin Flynn and Eibhlis Purcell who officiated and ensured all athletes were supported and given the opportunity to compete. Míle Buíochas!

A final mention goes to Aisling Dwyer who sustained considerable burns from her fall earlier in the programme. Aisling, one to never throw in the towel didn’t bat an eye lid and stuck to the task by racing her other two events following the fall. Kudos to Aisling for showing great will power that is to be admired. We wish you a speedy recovery and look forward to seeing you back on track soon.
Resumption of Training

The club has resumed training only for those athletes committed to taking part in these championships. Cross country athletes should attend on Monday & Wednesday nights at 7.30pm and Indoor athletes should attend on Tuesday and Friday nights at 7.30pm. All athletes must be registered for 2022 to attend training and must also observe all Covid-19 guidelines. Please contact Michelle Percy to ensure your application for registration has been completed.

Split the Bucket!
The winner of the Split the Bucket for Friday 14th January was Pat Duggan, Piercetown. Winning amount €118. On-line options are available on our website www.moyneathleticclub.com and tickets can also be purchased in Quinlan’s, Moyne. Thanks to all who continue to support each week.