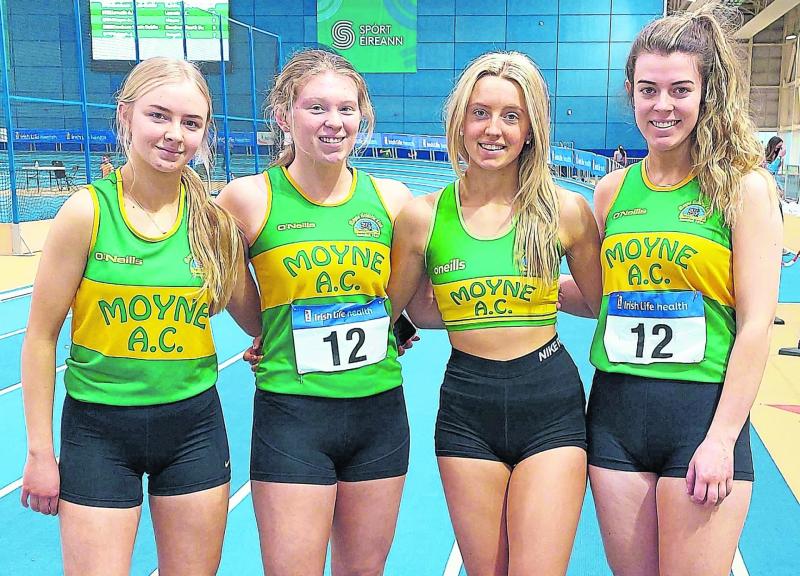 KThree juvenile club teams travelled to Nenagh on Sunday last for the Munster Indoor Relay Championships. Teams at U/13, U/14 and U/15 took on the might of Munster and despite being novices at this level of competition all three acquitted themselves very well in what was a red-hot atmosphere of athletics.

With twelve teams entered in the Girls U/13 event there was four heats with the team of Roisin O’Reilly, Saoirse Deegan, Olive Spillane, Ciara Joyce, and Heidi Maher drawn in Heat 2 against Derg AC and Limerick AC.

What an impressive performance from the Girls as they secured the win in a time of 2.09.89. With the four fastest times from all the heats qualifying for the final, the girls were unlucky to lose out. At U/14 level there was also twelve teams in action but this time they were divided into three heats with the girls in heat three.

Aisling O’Reilly, Olive Spillane-Leane, Ciara Joyce, Eleanor Doyle and Roisin O’Reilly made up this team and in a tough competitive heat against Dooneen AC, Midleton AC and Lios Tuathail AC finished fourth in a time of 2.09.47. Indeed Dooneen and Midleton later went on to finish 1st and 2nd in the final. Three heats were again the order of the day for the Girls U/15 team of Dearbhla Gleeson, Niamh Cleere, Eleanor Doyle and Aisling O’Reilly who were drawn against Midleton AC, Derg AC and Ennis Track AC and again did extremely well to finish third in 2.08.47.

Having only come together as teams in the past number of weeks, it was great to see their competitiveness and no doubt with plenty more training behind them they can raise the bar to another level.

Sharon Cantwell and Orla Healy represented the club at the Munster 4 Mile Road Championships in Quilty, Co. Clare on Sunday last. With the race incorporating the Senior, Novice, and master’s competitions in one race the thirty-five athletes toeing the line had a lot to run for.

The pace at the head of the field was fast but credit to Sharon as she went with them and was rewarded for her efforts with a great sixth place in 25.34. Orla had a constant battle with athletes from Clare and Kerry in a group just off the leaders and in an extremely competitive finish with only seconds separating the athletes she crossed the line in 17th place in 27.03.

Weekend of Athletic Competition
Athletes from the club will be competing at several competitions around the county and country this coming weekend. On Saturday, the County U/9 to Junior Indoor Championships take place in Nenagh with the All-Ireland Schools Cross Country Championships taking place in Mallusk in Belfast.