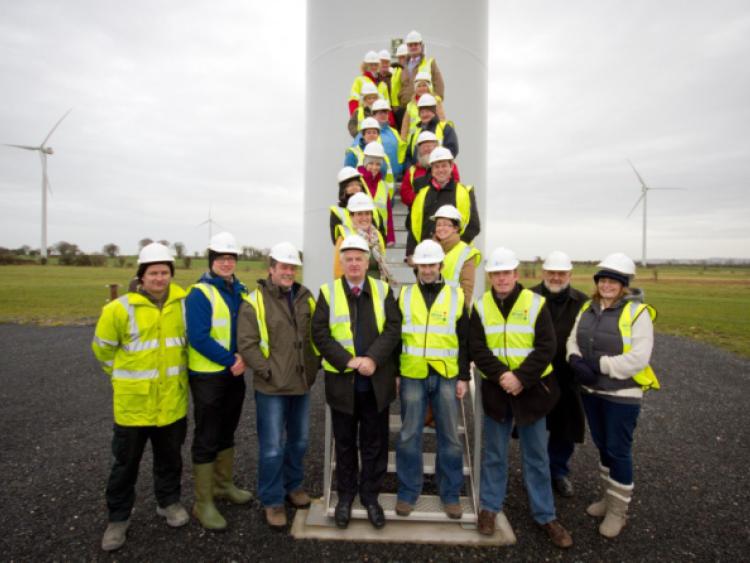 A group of 30 county councillors and planners from South Tipperary recently took part in a tour of renewable energy sites and installations around the county.

A group of 30 county councillors and planners from South Tipperary recently took part in a tour of renewable energy sites and installations around the county.

The tour was led by Tipperary Energy Agency and was organised to give county councillors and planners a real insight into what’s happening in renewable energy, as part of the preparation of the county’s Renewable Energy Strategy

The day took in sites such as The Lisheen Wind Farm in Moyne, Dwan’s hydro-electricity power plant in Holycross and a demonstration of photo voltaic solar energy system.

Paul Kenny, CEO Tipperary Energy Agency, said - “It’s great to see policy makers seeking real understanding from communities who live with and benefit from all types of renewable energy installations. This will ensure that a balanced knowledge based debate on renewable energy policy can be achieved”.

Lisheen Wind Farm in Moyne was the first stop on the day. The wind energy development consists of 30 turbines, each measuring 140 metres in height. It became operational in 2009 and is close to the communities of Templetouhy and Moyne.

The chairman of the Moyne-Templetouhy Community Forum, Tim Bergin, spoke of the benefits of the development to the locality in the form of funding to GAA clubs, the Athletic club and the Tidy Towns.

Cllr Micheál Anglim said - “The visit to Lisheen Wind Farm was interesting. The development seems to have been good for the community’.

Richard Long representing the South Tipperary Community and Voluntary Forum said - “This is my third visit to a wind farm. I don’t find them unsightly and I live three miles away from one”.

In Thurles, Paul Kenny presented to the group on the biomass sector in Tipperary.

He spoke of the opportunities of biomass in nursing homes, pools and hotels. The group heard that the sector supports 46 local jobs and is worth €2.4 million to the local ecomony. They also heard from Tom Foley, Solar Electric, who shared some of their Photo Voltaic solar energy work in the county. These include a dairy farm in Kilcoran, where the payback for the project is estimated to be eight years.

The day concluded with a tour to a 205 kW hydro turbine in Holycross. The turbine generates approximately 900,000 kWh per annum, enough to power approximately 170 households. All energy generated on site is supplied directly to the national grid. Michael Dwan led the tour and the group was fascinated to hear that the site was a once Powers whiskey distillery in the 1800s employing 700 people.