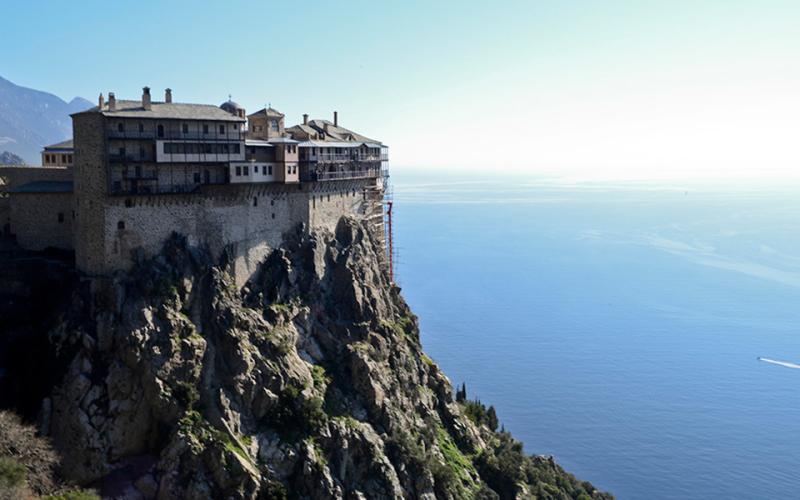 The drive from Thessaloniki airport to the Halkidiki peninsula on the northeast coast of Greece is not unlike Tuscany, with rolling hills covered with ancient, twisted olive trees spread out like pieces on a chess set on bright terracotta coloured clay as far as the eye can see.

We were heading to Ouranoupolis, known as the Gate to Heaven, and the entry point to the holiest place in the Orthodox church, Mount Athos, the holy mountain.

The stunning drive to Ouranoupolis, at the border to Mount Athos, takes two hours from the airport.

We stayed at the Xenia Ouranoupolis hotel which is perfectly situated by its own beach but also two minutes’ walk from the town’s strip of restaurants, shops and the harbour where boats came and went from Mount Athos.

Ooronolpos is the last town before Mount Athos which only allows entry by boat. I visited the border wall, a short two kilometre walk outside town, where there is an atmospheric ruined castle called Frangokastro overlooking the border.

This is the castle of the Franks and during the Middle Ages a ‘Frank’ meant anyone from western Christendom, but particularly a nasty crusader type.

This peninsula is full of ancient history with Aristotle born in nearby Stagira. Aristotle is probably the best known peripatetic, for his habit of strolling up and down whilst teaching and he is quoted as saying the best thoughts come when walking.

So it is fitting there is now a great walk that goes above Stagira with views out to sea to celebrate the great philosopher.

What I love about holidays to Greece is not only the great food, weather and landscape but being able to be immersed in history from ancient times to modern.

Every person and place has a story.

The town beach has an old tower whose history tells the story of the town.

The tower was first built by the Byzantines, then the Ottomans took it over and fortified it and then it became the refuge site for refugees who were displaced after war with Turkey in 1922.

There were murals around the town commemorating the anniversary of the displacement of over one million Greeks from Asia Minor one hundred years ago.

Ooranolpos is a fascinating town to stay in unlike any other in Greece I have visited. The monks are pescatarian and their influence is in the fish restaurant menus.

There is a pilgrim passport office and there are many gift shops with iconic orthodox paintings and gold artefacts with much bling to attract the Russian visitors, who were light on the ground this year.

All pilgrims entered the mountain by sea from the harbour and it was great just watching the monks coming and going from the boats wearing the same black floor length Cossack style robes and all sporting grey tangled beards.

A uniform unchanged since Byzantine times. It is possible to get a tour boat down the peninsula to see all the monasteries on the beautiful cone shaped mountain.

Mount Athos, established in the 9th century, is a self-governing monastic theocracy dedicated to Mary, the Mother of God and is renowned for its pure Orthodox beliefs.

This led to the banning of women from Mount Athos 1,000 years ago. There has been no person born on the mountain since the exclusion of women and the only relaxation of the ban is for female cats whom I was told by a local “can’t be controlled”.

Mount Athos comprises 20 monasteries of various sizes clinging to the mountain and cliffs edge high over the sea along the peninsula with some looking more like medieval forts.

This religious republic under religious rule is recognised by the Greek Government, and, more recently, by the EU.

The mountain has 17 Greek and one Serbian, Bulgarian and Russian monasteries. There are over 2,000 monks living austere lives of prayer and toiling the land and fishing the surrounding sea.

The monks have exclusive rights to the land and the sea with no outside boats allowed within 500m of the shore.

The Holy Mountain can only be accessed by sea and a pilgrim visa is needed which can take over six months to get in Thessaloniki.

But the mountain is a place of pilgrimage for Orthodox christens from all over the world with someone over 50,000 visiting. It is rare for non-Orthodox Christians to be allowed to enter but Prince Charles is a big fan and has visited many times. The largest and I would say most garishly coloured monastery is the Russian monastery and it had cranes around the site when I saw it.

President Putin has made a number of pilgrimages in recent years to boost his credentials as a traditional Orthodox Russian.

He has even made the wine made at the Russian monastery the official wine of the Kremlin.

Mount Athos has always been seen as a guardian of conservative traditional Orthodoxy.

At the Council of Florence in 1439 it was the monks from Mount Athos who refused to allow the Catholic and Orthodox Churches unite in return for western military help to fight against the Turks, which eventually led to the fall of Constantinople.

That deep adherence to what they would call pure Orthodoxy still holds sway today on the mountain.

There are other great day trips to do from Ouranoupolis including a short 15 minute boat ride to Ammouliani island which has some of the best beaches in Greece and a lovely small town and nearby Pena Island which is great for snorkelling.

Ryanair has direct flights until October from Dublin to Thessaloniki.

To hear all about my trip to the Halkidiki peninsulas including the amazing Sithonia region check out my Halkidiki Special Travel Tales with Fergal podcast on www.traveltaleswithfergal.ie.