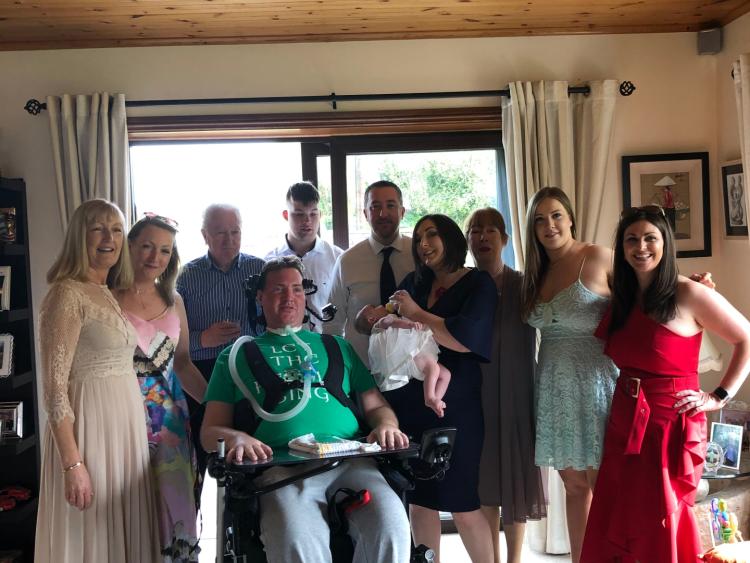 Cahir's Shaun Fogarty with his family at a recent christening

A County Tipperary car crash survivor is determined to finish his degree and secure employment, despite being paralysed from the neck down.

In July 2013, Shaun Fogarty was involved in a collision that changed his life forever.

The then 19-year-old had just finished first year in Applied Physics at the University of Limerick and was working as a waiter at Aherlow House Hotel.

A passionate Tipperary GAA and Munster Rugby supporter, Shaun can only vaguely remember the crash. “I was driving home from Aherlow House and I think I collided with an ambulance but I can’t remember,” he tells TipperaryLive.ie.

Shaun’s mother, Gretta, says it was a “devastating” time for the family. “We were just living our lives when the gardaí came to the door to tell us Shaun had been in an accident and was in hospital. We didn't know if he was alive or dead. We went into the hospital and spent two days trying to get them to transfer him to the Mater or he would have died. They were amazing in South Tipperary General Hospital, really supportive and kind to us,” Gretta recalls.

Gretta says the family were given “hugely negative vibes” when they got to the Mater Hospital. He had broken his C1 vertebrae, which forms the joint connecting the skull and spine. “He had his spine fused and we were told to take every day as it comes, that he would be lucky to see next week, he would never walk again, never drink or eat again, and would be in a nursing home for the rest of his life,” she says.

Gretta praises Shaun, who is now 25-years-old, for having the determination to push through the “dark times” following the accident. “Days turned into weeks after his operation and he blew every milestone out of the water. He insisted on trying to talk, eat and drink again and he got there. He eats steak dinners and drinks hot whiskeys better than the rest of us,” she smiles.

“But there were times when Shaun had a lot of neuropathic pain, which is a bit ironic when you are paralysed. They have managed to control that since, but at the time he was asking us to turn his ventilator off, which was his life support and he was aware of that.”

A mother of three and married to Kevin, Gretta stayed by Shaun’s side throughout his rehabilitation at Stoke Mandeville Hospital. “I would go home every second weekend and the kids, Chloe (21) and Tiernan (17), would come over. It was tough going for everyone, especially for Shaun because he is a real family person and it wasn’t good for him, but everything else was amazing,” she says.

Gretta pins meeting two other men with severe spinal injuries at Stoke Mandeville Hospital as a pivotal moment on Shaun’s road to returning home. “We really needed to see that people could live with Shaun’s spinal condition. Ironically, on St. Patrick’s Day we met two really great guys with the same condition. Both of them have travelled the world, are working and doing incredibly well. For us, that opened the floodgates. We fought up until then because we knew it was the right thing to do. Shaun had the right to life and we want to keep it that way,” she says.

Gretta hopes that Shaun will one day be able to travel and join the workforce, calling on the Government to put supports in place for people with spinal injuries. “People with spinal injuries don't automatically get a medical card. He has a Home Care Package, which involves a nurse and carer who do 12-hour shifts, and his medication costs are enormous. If he loses his medical card, he loses everything and we wouldn't be able to cope. No job would pay enough to sustain the Home Care Package. We hope the Government will see that people like Shaun can work without it affecting them dramatically. And we hope that the public sees that people in wheelchairs are just like themselves and do not discriminate towards them,” she says.

Gretta thanks the communities of Cahir and Clonmel for helping the family over the past six years. “He is like a celebrity in the town of Cahir, and the people in Cahir and Clonmel have been incredible to him. People always go out of their way to help us and make things as easy as possible,” she adds.

Gretta is loving spending quality time with Shaun, who is now fully independent of her thanks to the Home Care Package. They recently enjoyed a day out at the Jameson Distillery in County Cork and were also invited to Dublin Castle to speak at the National Critical Care Programme Conference about their experience with the HSE.

A graduate of Coláiste Dún Iascaigh, an optimistic Shaun is currently studying a Bachelor of Science in Mobile Communications and Security at the University of Limerick. “There were times in hospital when it was depressing, but that’s the same for everybody waiting for things to happen. They were nice to me and done everything they could,” Shaun says.

“College is my main focus at the moment. I’m doing some research in the area and it's going well. I’m looking forward to starting third year in September. It has been a long road, but it’s good to be back home again. I enjoy hanging out with my family and they have been very supportive. Life is good and I’m happy,” he adds.