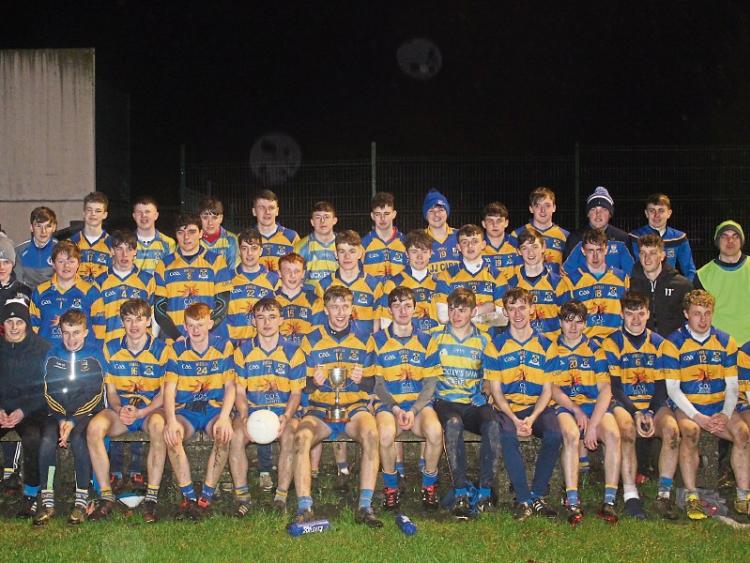 The senior footballers of Cashel Community School and Thurles CBS played out an exhilarating County A football final in torrential conditions on Monday night, December 17, in Golden

Thurles began by looking to run the ball from deep as they were against the wind and started to ask questions of the Cashel backline. They earned themselves the game’s opening score courtesy of a free from the boot of Paddy Creedon. The sides were level when Cashel’s dangerous inside forward Riain Quigley opened the West school’s account with a fine score from play. Quigley was again on target to notch the second score of the game and wing-forward Liam McGrath gave the Cashel side an early three points to one lead. The deficit was cut at the end of the opening ten minutes, once again from a Creedon free.

after this initial burst of scores both sides struggled to penetrate the oppositions staunch defences. For an eight minute spell neither side could register a score, the tight marking and excellent positioning shown Tomás Bourke at fullback for Cashel putting a halt to the Thurles charge.

Cashel themselves were finding scores hard to come by as the CBS began to filter back and form a resolute defensive screen in front of their own goal. Cashel remained patient and began to work the ball wide across the pitch stretching the Thurles rear-guard. The concluding ten minutes of the half saw this tactic bear fruit as the Cashel men plundered 2-3 without reply.

Quigley finished a sublime solo move cutting in from the left, leaving three defenders in his wake and finishing with his weaker right foot to find the corner of the Thurles net leaving Conor Stapleton with no chance. This goal was followed by two further points from play at the end of some patient build up play Quigley again on target and wing forward Jack O’Rourke contributing the other. The game’s second goal came courtesy of a fine team move in which wing back John Ryan showed all his class to find McGrath who showed nimble footwork to finish from close range. McGrath followed up with a score from play as Cashel began to find their flow and a way through the sticky Thurles defence. Another Creedon free kept Thurles barely in touch but a huge score form out the field by Aaron Moloney crowned a dominant end to the half from the West Tipperary men, 2-7 to 0-3 at halftime.

The second half was a far tighter affair and Thurles now backed by the strong wind began to edge their way back into the contest. Three points without reply to start the second half gave them hope, two from play and another from the reliable Creedon. Cashel had failed to make a mark on the scoreboard for the first ten minutes but extinguished all hope for Thurles accounting for the next two scores, one a vital goal from McGrath after some fine work again by Jack O’Rourke and a point from the tireless Aaron Browne, leaving the score line 3-8 to 6 points heading into the final quarter. The teams exchanged scores as both teams began to tire and the benches began to play an important role. This was evident as substitutes scored for both teams, Darren Flood for Thurles and Brian Og O’Dwyer for Cashel. Quigley tagged on his final score of the night from a free to finish with 1-4.

It must be said Thurles never threw in the towel and raised a green flag courtesy of a Devon Ryan penalty after 27 minutes of the second half. This would prove to be the final score as Cashel held on for a famous victory, their first McGowan title in fifteen years.