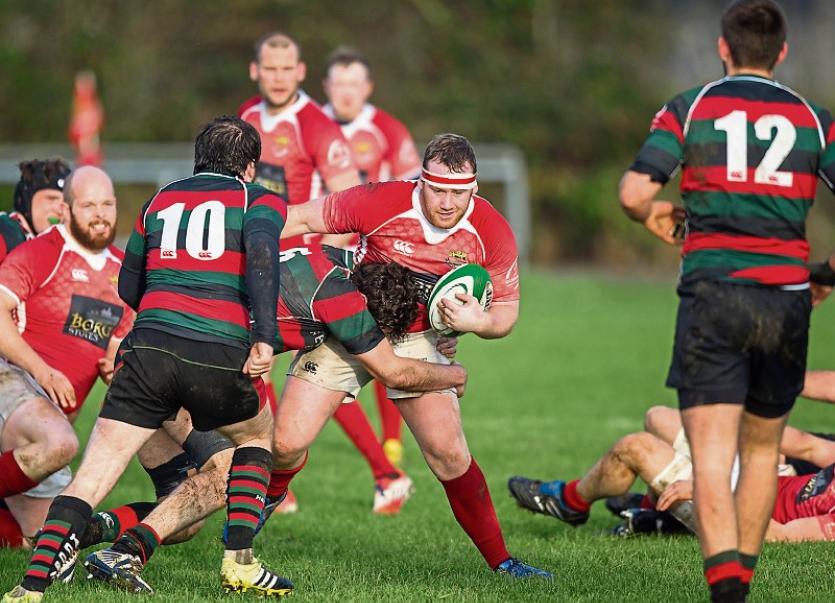 Cashel’s Junior 1 team took centre stage on Saturday last in Kanturk in the Munster Junior Cup. Cashel knew that a much improved performance was required following their narrow win in Mitchelstown the previous week, and to be fair to the players they really upped the effort and came away with a well-earned draw and progression to the next round by virtue of having scored the first try.

Cashel played with the wind in the first half but against the hill. They started like a whirlwind, with Frank Kelleher breaking from half way and almost making it to the try line, only to be held up just short of the line. Cashel had territorial advantage for the first 15 minutes. Kieran Gleeson worked hard to rob an opposition ball in a maul. Cashel had two lineouts in promising positions but Kanturk used their only jumper to great effect to disrupt the throw. Indeed this player was the outstanding jumper on the day and was a thorn in Cashel’s side for the duration of the game. Cashel however were strong in the scrum but the dominance did not transfer into scores.

On 17 minutes Kanturk relieved the pressure and were awarded a penalty inside the Cashel half. They went ahead with an excellent kick. Three minutes later they intercepted a Cashel move and were stopped by a strong Scott Scanlon tackle. Five minutes later Michael Kelly put in a crunching tackle to stop the home side in their tracks.

As half-time approached Cashel upped their game and drove into the Kanturk danger area. The forwards went through the phases and eventually Michael Kelly charged over for a try. The half-time score was Kanturk 3 Cashel 7.

The Cashel front row of Cormac O’Donnell, Sean O’Connell and Michael Kelly were very solid. Gerry Ryan and Kieran Gleeson were prominent in the loose. The back row of Paul Hayes, Aidan O’Connor and Aidan Butler carried well.

Kanturk came at Cashel in the second half but missed a penalty opportunity when Cashel did not clear their lines. Eamon Connolly kept Cashel going forward with some clever kicks to the corner. With 20 minutes left Kieran Lonergan came on and provided go-forward ball for Cashel. Eamon Connolly nudged Cashel 10 points to 3 ahead with a good penalty after a good phase of play.

With 15 minutes remaining Cashel were looking comfortable but it was still a one-score game. A high tackle resulted in a Cashel player receiving a yellow card. Kanturk kicked for touch and after a number of phases crashed over for a converted try to level the game. Just before the end Eamon Connolly had a chance to win the game for Cashel with a long-range penalty but the ball drifted narrowly wide.

Both teams had put in a huge effort and then faced two periods of extra-time. The first half of extra-time was evenly matched. Kanturk missed a penalty from 35 metres. Cashel had the advantage of the hill for the second half but it was Kanturk who got the chances with three penalties. One drifted wide, one hit the post and the third was brought forward as Cashel’s frustration got the better of them. The third penalty sailed between the posts to give Kanturk a three-point lead and three minutes on the clock.

Cashel recovered the ball from the kick-off and attacked, Kanturk were penalised and Cashel kicked the penalty to the corner. Winning the lineout they drove for the Kanturk line and showing wonderful composure they held possession for almost two minutes. Kanturk defended heroically but infringed in front of their own posts. Cashel knew a draw would see them through as they had scored the first try. Eamon Connolly coolly slotted the penalty and Cashel were through. Credit must go to both teams for providing a most entertaining and sporting game.