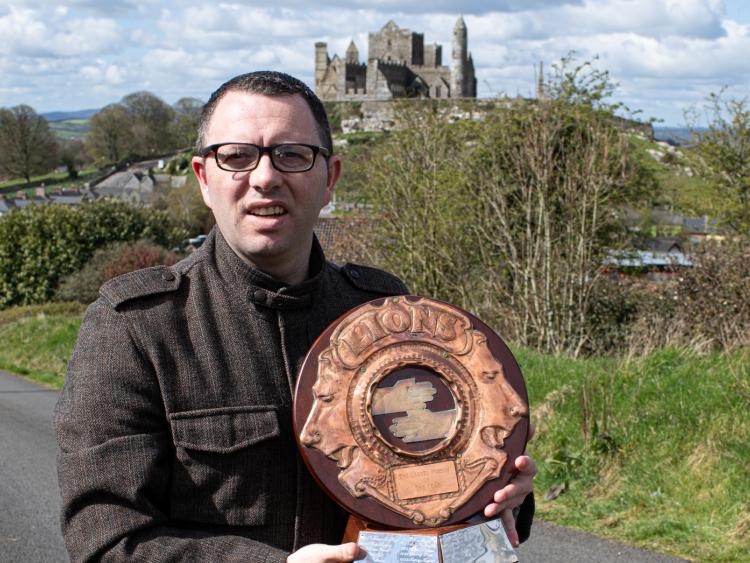 Mark Fitzell, the person responsible for the Many Faces of Cashel page on Facebook, has been chosen as Cashel Person of the Year for 2021.

This was announced by Cashel Lions Club at a virtual presentation of the award by Zoom last Thursday night.

A proper presentation will have to await the relaxation of the present Covid restrictions.
In announcing the winner Cashel Lions Club President, Eddie Morrissey, stated that the
award recognised the person, who contributed significantly to the life of Cashel and District
during 2020.

The contribution could be in any area of human activity, social, political,
artistic, sporting, etc The Lions had been presenting the award since 1987 and they were
proud of how they had recognised the excellent contributions of many to society during that
period. He mentioned some of the winners of the past number of years, Pat Flynn in 2016,
John Murray in 2017, Aidan O’Brien in 2019, Angela McGrath in 2019 and Mary Roche in
2020.

He informed his audience how last year’s winner, Mary Roche, had no formal presentation.
On the day fixed for the presentation, March 12, Taoiseach Leo Varadkhar, made his famous
speech from Washington and closed the country down. In the intervening twelve months
the Lions never got an opportunity to make a formal presentation to her, but still hoped to
do so at some future date.

He was delighted that Mark Fitzell, this year’s winner, would now join the distinguished
ranks of Cashel Persons of the Year. He was the thirty-sixth person to be so honoured and
he was delighted to say that the number of recipients was equally divided between men and
women. Mark’s success made it 18 all!

Nominators.
Mark was chosen from five nominees and he was nominated by three different nominators,
Cllr Declan Burgess, Jackie Cahill and Andrew Mernagh. They were asked to give their
reasons for nominating Mark.

For Cllr Burgess Mark was a household name in Cashel due to his exceptional work on the
‘Many Faces of Cashel’ project and his work was known all over the world. ‘This project has
created a forum for friendships to strengthen, stories to be remembered and legacies to be
appreciated. It is much more than a Facebook page. It’s a part of the heartbeat of Cashel
Town, one that its inhabitants cherish clearly’, he said

For Jackie Cahill Mark had provided invaluable resources to the local community in recent
times with the genesis being his immensely popular ‘Many Faces of Cashel’ Facebook Page.
From humble beginnings, this group now has 7,500 members. It is quite a wonderful page
where contributors post photos and content from bygone eras. Many of the people
featured in the photographs are known, others not so much.

The beauty of the page is that, given the fact that so many members visit the page, a photograph can lead to some brilliant discussions and, in many cases, mysteries are solved as to the identities of some individuals who feature in the photographs. Mark’s work has helped to connect people from around the globe – some who never met before, some who were old friends who had simply lost
touch for geographical reasons.’

Andrew Mernagh joined the meeting from Wicklow and spoke about how he knew Mark
from school. In his work he had saved the social life of Cashel. Many of his interviews
connect with a past that is now gone but is recalled in the stories Mark tells in his three
books. Another reason for nominating Mark was because of the excellence of his
photographs. His work includes a selection of outstanding photographs, which makes it a valuable photographic archive as well as a social history. He has given outstanding service to
the town of Cashel.

Eighty Life Stories
At this stage president Eddie declared Mark Cashel Person of the Year for 2021 and made
him a virtual presentation of the trophy. He went on to refer to some of the eighty life
stories that are to be found in Mark’s three books, highlighting some of those in his third
book.

He referred to the story of Dean innocent Ryan, wonderfully entitled ‘All That Jazz’ arriving
to the City Hall to a packed house indulging in that most objectionable dance, Jazz, clearing
the house and together with the lapdog councillors drawing up fifteen regulations for
proper behaviour at dances.

Among the regulations were that ‘All women dancers recommended to use Irish-made materials rather than flimsy, foreign silks and satins’.

Another that ‘There shall be no parking of motor cars in-or near, the dance premises’. A
third ‘There shall be no retiring from the Hall, except when people are leaving for good’. The
Dean was a powerful man and could influence life behaviour in this dictatorial manner.
Eddie contrasted this with the story of Patsy Lacey and his influence in the Picture House,
the cinema in Ladyswell. Patsy was a mild-mannered man, who kept great order in the
cinema and reigned supreme with the power of his torch!

And a third mentioned by Eddie was Alice’s Snack Bar where the jukebox was king, where
young people came in from the cold and where it was heaven on earth listening to all the
disc jockeys of the day and the top 10. All of this was captured wonderfully by Mark in his
book.

Mark Replies
Eventually it was Mark’s opportunity to reply. He thanked the Lions for organising the award
and his nominators for putting him forward. He related how he started the whole project
back in 2013 as a result of a photograph taken at Quigley’s Corner in 1978 coming to light.
That started his interest. If one picture could generate so much discussion and debate there
must be many other similar pictures out there waiting to tell other stories.

It started his
interest, he opened the page and it became an instant success. The books followed.
He was keen to recognise that the success of the project was dependent on the work of
many great photographers in Cashel such as Dick Moloney, Philip Cronin, Pat Dunne, Mickey
McDonnell, Tom Meehan, Pádraig Ó Mathuna.

He saw himself as a minder of this great archive for others. He went on to say how Lockdown had produced Volume 3. It eased the work. He was keen to thank his wonderful family and his wife, Jean. He knows and appreciates that his work means an awful lot to an awful lot of people.

The Praise of Politicians
Among the attendance was Martin Browne, T.D. who was loud in praise for Mark. He was a
true gent and came from a great family. He had produced great books from which Cashel
will learn a lot and he congratulated him on their production.

Cllr. Roger Kennedy complimented Mark on his work over the past twelve months. He
remarked on his ability to grasp the essence of the people he features in his books. They are
a great source of entertainment and knowledge and they stir up not only conversation but
research as well.

Cllr Michael Fitzgerald complimented the Lions on their work and praised Mark for his
widely renowned books and his Facebook page. He went on to lavish praise on Mark the
actor also and recalled his numerous outstanding performances on the stage. He believed
that his performance in the Cripple of Inishmaan was as near perfection as possible.

A Deserving Award
It was a great night when everyone present believed that Mark was the most deserving
Person of the Year there could possibly be. Speakers strained to find words adequate
enough to recognise his outstanding achievement.

What an asset he is to the town! How much he has done to make Cashel people proud of their place and proud of the people who have made the town what it is. And not only has he brought the past alive, he has also contributed to the present through his work on the stage and his contribution to the
musical life of the town.

And through all his actions runs, in the words of Declan Burgess, an
incredibly generous spirit, that impels him to lend a hand to any voluntary efforts in the
town. A great award, absolutely deserved!