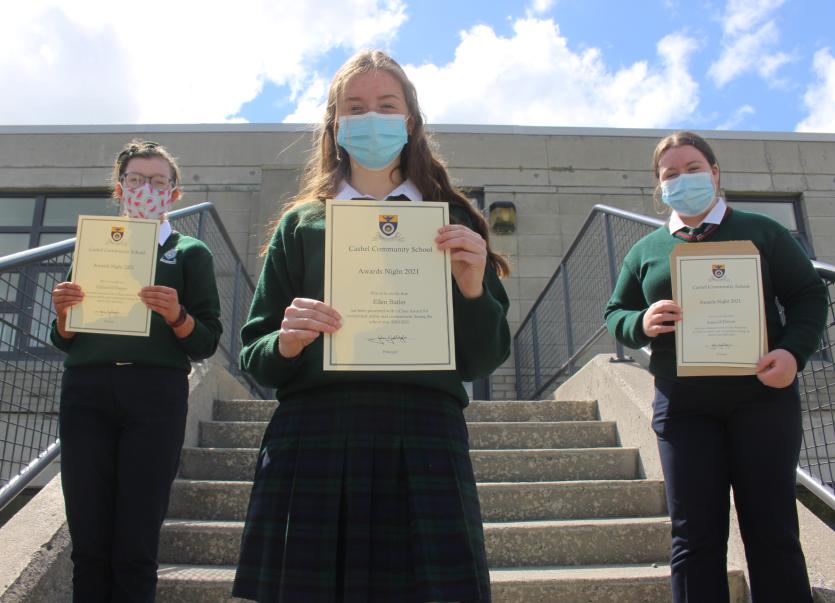 The Students Awards Ceremony took place on Tuesday, May 25 during school time. Students viewed the ceremony in their classroom setting. A live ceremony was broadcast from the lobby area where speakers shared a podium space.

Sixth Year student Julianne Bongcaras was the winner of the Gerry Ryan Memorial Award for excellence in art. Gerry taught art in Cashel Community School from the day it opened. His commitment to his students and to the school was boundless. He was an extremely accomplished draughtsman and as a printer and craftsman he was peerless. His talent for sharing his skills with his students was prodigious.

The Michael Purcell Memorial Award was presented to third year student Jason Kao for his Junior Certificate Woodwork project. Michael was a woodwork and technical graphics teacher in Cashel Community School from 2003 until his untimely passing in 2016. He had a huge interest in design and loved to see students use and develop their design skills as part of their Junior Certificate Woodwork Project.

3 Special Awards were presented on the day for

The most prestigious award of the night was Student of the Year. By their outstanding display of academic achievements, personal qualities and support for school values, past winners have added to the integrity of this award. In making their selection teachers were asked to take the following into consideration: academic record, achievements, leadership and initiative qualities, good interpersonal skills, school involvement, moral courage, any positive quality and someone who has credibility with both the staff and student body.

Sophie O’Meara from Cashel was named as Student of the Year 2021 and is a very worthy winner of this accolade. School Principal, Mr. Gallagher went on to say Sophie’s outstanding display of academic achievements, personal qualities and support for school values, have added to the integrity of this award. In making their selection teachers were asked to take the following into consideration: academic record, achievements, leadership and initiative qualities, good interpersonal skills, school involvement, moral courage, any positive quality and someone who has credibility with both the staff and student body.

The attributes displayed by Sophie over her time here has seen her always setting the bar at the highest level while prepared to push herself out of her comfort zone. Sophie has a great potential. She has displayed very strong moral values and an unbending will throughout the times spent with us. There is a satisfaction shining inside of Sophie. Having had the pleasure of observing Sophie, I can safely say she can serve as an example to many an adult with the level of responsibility and personal qualities shown on her journey within our school community.

Sophie as a student is caring, demonstrates friendly attitudes to other students and always strives to help others. This is a sign of an outstanding person. She has friendly relationships with their peers and respects all people. Various people in their surroundings characterise this student as a very pleasant, caring and attentive person”.

Mr. Michael Moore (Student Awards Coordinator) would like to thank everyone who helped out in any way in making the ceremony such a success. Finally we would like to acknowledge all the students who did not win awards this year but nonetheless make a very valuable contribution to life in Cashel Community School. We encourage your ongoing participation in school life and look forward to being able to reward your achievements in the future. We also wish all our award winners the very best in their future exams, especially our 6th year students who are facing into state examinations at present.