Galtee peaks conquered in one day by Cashel Lions 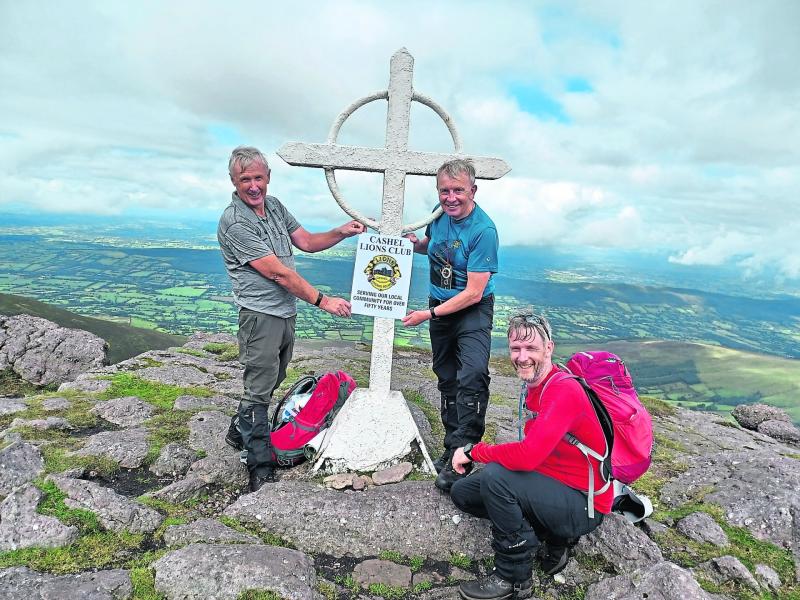 On Saturday, September 18, the early morning fog had cleared just as the three members of Cashel Lions Club stood at the foot of Temple Hill, which was the first of the ten peaks they would climb as part of the Cashel Lions Club Ten Peaks Challenge.

Eighty minutes later, Willie Fahey, DJ Horan and Eddie Morrissey stood at the cairn on top Temple Hill wondering why it is only called a hill!

They descended in bright sunshine to climb the two peaks on Knockaterriff. From there it was downhill to the base of Lyracappul and, with no horse in sight, they reached the summit just after eleven o’clock where they enjoyed their first break of the day.

From there they trekked to Carrignabinnia and along to Slievecushnabinnia looking out into a dense fog which filled the Glen of Aherlow and at the same time enjoying the fabulous views of the clear bright day in the Blackrock Valley.

The three Lions then followed the Galtee Wall to the Galtee Mór which was the highest point of the day before descending for the ascent of Galtybeg where they enjoyed “big break”, just over five hours into the challenge.
With eight peaks behind them, the group descended from Galtybeg and made the seemingly never ending trek to Greenane which was the penultimate peak of the day.

They climbed Farbreaga where they had a low-key celebration as they had reached the final peak but not the end of the road.
From there it was an hour-long downhill trek to the Lake Muskry car park, where, after eight and a half hours on the Galtee Mountains, they were cheered over the finish line by some members of Cashel Lions Club who had gathered to greet them and ferry them back to the car which they had left at the starting point.

The “Ten Peaks, Three Lions, One Day Challenge”, was complete and as Willie, DJ, and Eddie reflected on the day they were buoyed up by the extremely positive response they had received for this major fundraiser for Cashel Lions Club.

The club is extremely grateful to everyone who made a donation or sponsored the Ten Peaks Challenge. In particular Cashel Lions Club wishes to thank individual members of the public who contributed by making a donation on the online fundraising page, through sponsorship cards, in the Ten Peaks Barrell in the Credit Union and to the street collection on Friday, September 17.

A spokesperson for the club also stated that “we are deeply indebted to the many businesses in the area that, after a challenging time for business generally, were very willing to make generous donations to the Ten Peaks Challenge”. “We are particularly grateful to the five businesses that came on board as our main sponsors and who agreed to sponsor a peak on the challenge and these are, Affinity Credit Union, Campion Insurance, Cian O’Carroll Solicitors, Maher Auctioneers, and Martin O’Dwyer Family Butchers,” he added. He concluded by saying that “without the generosity and goodwill of the local community, Cashel Lions Club would be unable to continue its service to Cashel and surrounding areas”.

Cashel Lions Club would like to remind people that a donation to the fundraiser can be made until October 18, on the online fundraising page, www.idonate.ie/
cashellionsclub
galteetoptenpeaks challenge or by contacting any member of Cashel Lions Club.