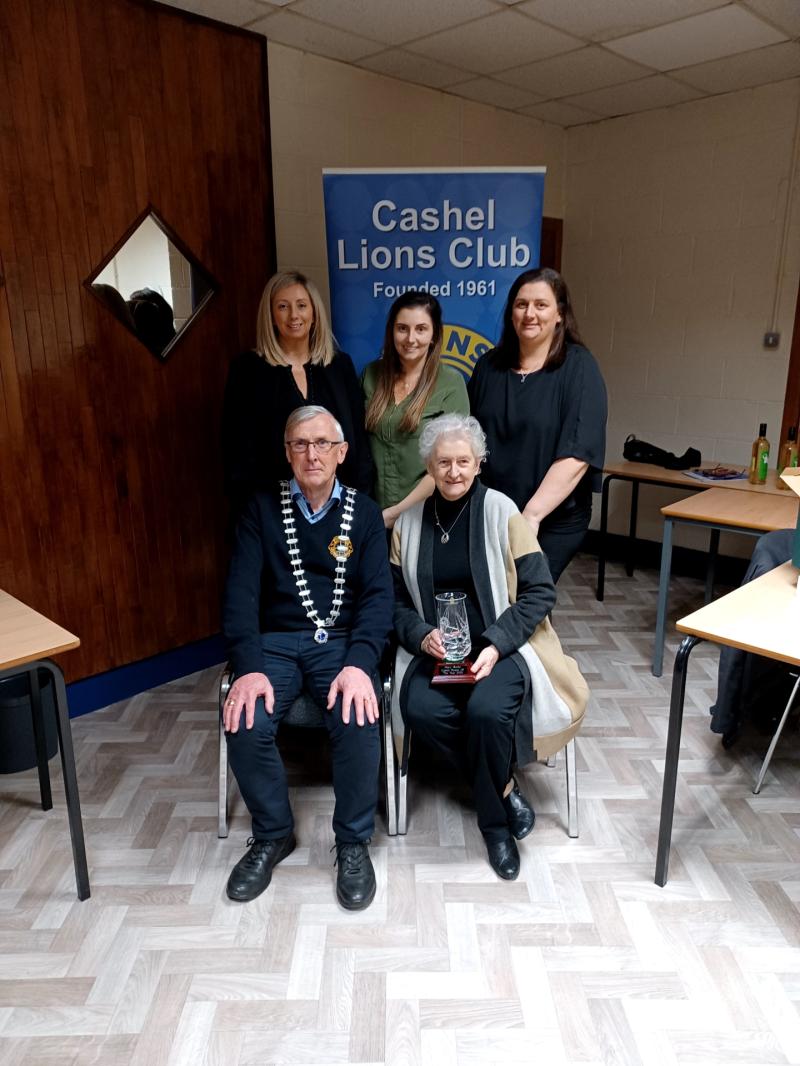 The Cashel Lions Club was geared for a presentation of the Person of the Year award to Mary Roche in March 2020 when Covid struck, restrictions on people meeting were introduced and the event had to be called off. In the meantime there was no opportunity to make the presentation.

That was until last week when a reduced presentation event was organised and Mary received her prize. As luck would have it the reduced event was arranged for a club meeting and between the decision and the meeting all the Covid restrictions were removed and a fully-fledged presentation might have taken place!

And Mary would have deserved the greatest recognition for her achievement, as Lions Club President, Eddie Morrissey, stated at the club meeting in Larkspur Park, which was attended her family and friends as well as club members. Her choice as Cashel Person of the Year 2020 was very popular and very well received as the over 200 likes on Facebook illustrated.

Mary has been an indefatigable worker in two areas as worker in the Girl Guides and as co-ordinator of the Cashel Community School Book Scheme, which is a model for similar schemes in the country. Mary was involved in the scheme for seventeen years and, according to President Eddie, this involved a big workload that stretched out for most of the year.

All this work was voluntary and was carried out with efficiency and enthusiasm. Mary was most deserving of the award and an outstanding Cashel Person of the Year. At an earlier date Mary had been presented in her home with the Perpetual Cashel Person of the Year Plaque, which is now inscribed with her name, and the President presented her with an inscribed piece of Tipperary Crystal.

In her reply, Mary was very modest about her achievement. She thanked the Lions Club for the honour and organising the presentation, as well as her nominator, Pat Cummins. She has always loved the work she did and made tremendous friends through it down the years. She was honoured with the award but she was keen to emphasise that the work in the Book Scheme was predominantly a team effort.

Young Person of the Year

Mary wasn’t the only person to be honoured on the occasion. Colin Harding won the Young Person of the Year in 2019 and there was never an opportunity to present him with his award.

Colin was in Transition Year in Cashel Community School at the time and involved in a great variety of voluntary activities. Among these was the Food Cloud, which involved the distribution of hampers to the needy, the Student Council in the school and Comhairle na nÓg.

President Eddie, who presented Colin with his award, informed those present of how he was still involved and how he helped prepare the club’s current entry for the Young Person of the Year, Antonia Kevin, for the competition. Colin was accompanied to the event by his parents, Liz and Nicky. He thanked the Lions Club for the award and spoke about how he tries to get young people involved in community work.