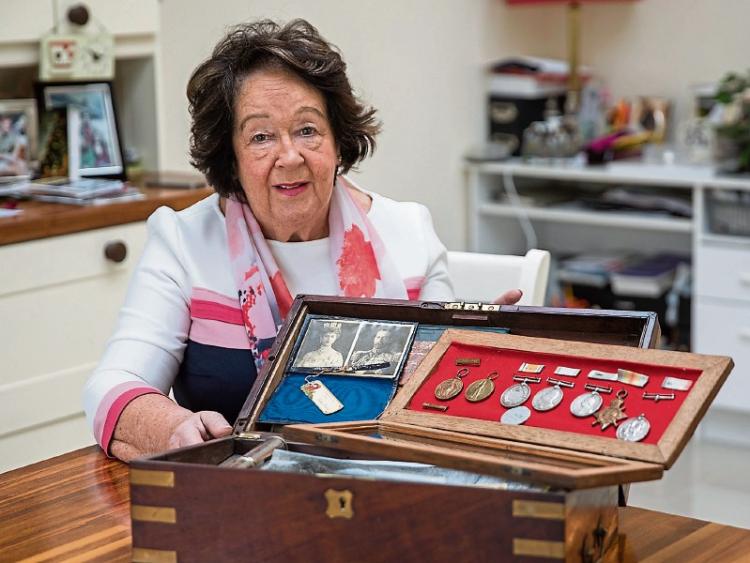 Vicky Bolger with her grandfather's sea chest from his time in the navy, including medals, post cards and letters

In a year that marks the 100th anniversary of the end of World War One, a family is remembering a grandfather who fought in one of that conflict’s great naval battles.

Not only was the Battle of Jutland one of the bloodiest confrontations on the high seas in the war but is regarded as one of the most terrible battles in naval history.

Patrick John McEvoy was a Chief Petty Officer Telegraphist on the HMS Lion throughout the battle in June of that year and fortunately emerged unscathed.

As the battle raged between hundreds of ships on both sides, the radio mast on the Lion was damaged and McEvoy showed remarkable courage as he climbed the mast to repair it.

Today his family recall memories of his remarkable career and his  role in the decisive battle of the war.

His grand-daughter Vicky Bolger and  siblings  Paddy McEvoy, Fethard, Gabriel McEvoy,  Charleville and Mary Murray,  Wicklow, and the family of  another sister, the late Assumpta Bergin,  have a wonderful collection of memorabilia from his time in the Royal Navy, and especially from the Jutland encounter.

“ It's great to look back on his remarkable career”, Vicky says.

McEvoy was born in Cork where he joined the navy and the family later lived in Urlingford, Co. Kilkenny and in Tipperary town, but Vicky has lived in Clonmel for forty two years since marrying Tom Bolger.

The centenary of the war's ending brings back many memories of her grand-father and his role at Jutland and in further engagements at Heligoland Bight and Dogger Bank that won him bravery medals and commendations.

HMS Lion was the Flagship of the Battlecruiser Fleet under the command of Admiral David Beatty and one of the family's prized possessions is a model yacht made by the ship's carpenter from wood from the captain's cabin.

The family also has his sea chest which contains his diary, maps, letters and items of equipment from his work in the telelgraph room. Included is a hand-written Christmas card from King George V and Queen Mary.

And holding a special place is his collection of medals, including the Medaille Militaire from the French government and the Conspicuous Gallantry Medal from the Battle of Jutland.

Also serving on HMS Lion during the Battle of Jutland was Lord Louis Mountbatten.

“I have always had a great interest in World War One memorabilia and this personal family collection from that time means so much to me and my family.”.

Vicky's father Paddy was born in Portsmouth at the time her grand-father was stationed at the huge naval base in the city. He became a highly respected teacher, working in Rosegreen for sometime before spending forty years in Kilkenny.

Her uncle Jim grew up in in Brookville, Tipperary town, where he is fondly remembered as a founder and stalwart of Tipperary Credit Union.

All the family now recall their grand-father's heroic exploits during the war, especially at Jutland,  and happy that he survived a conflict that claimed so many lives and lived a happy life until his death in 1945.