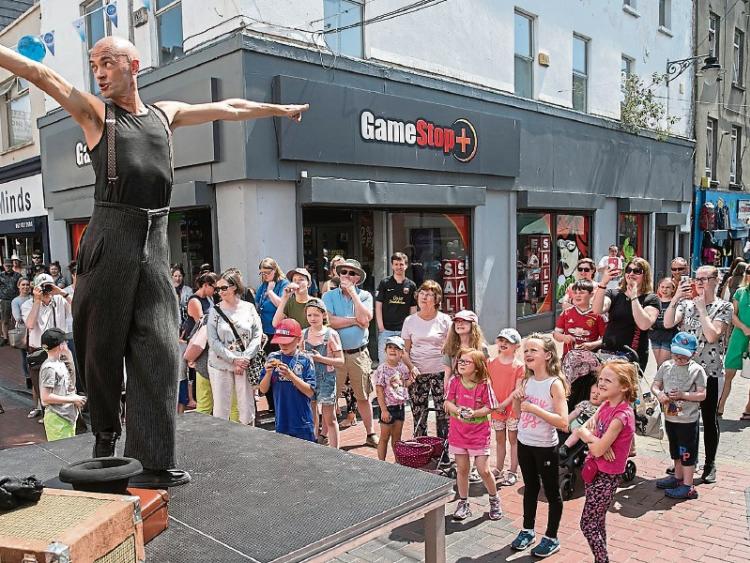 The ambition of Clonmel Arts Festival is “to put the town on the map”, festival board member Comdt JJ Killian told councillors at Clonmel Borough District’s January meeting.

Recognised by the Arts Council as “one of the eight strategic arts festivals in the country”, the newly rebranded Clonmel Arts Festival - formerly the Clonmel Junction Arts Festival - aims to stage a annual high quality multi-disciplinary festival  showcasing local, national and international artists.

Clonmel Arts Festival, represented by board members Comdt JJ Killian (strategy and governance) and David Kirwan (chairperson) - were afforded the opportunity to document the history of the festival to the council chamber, recollecting the 1990s when the Gallowglass Theatre Company provided theatre, comedy events and traditional music.

Comdt Killian said the future direction of Clonmel Arts Festival will involve the local community in a diversity of artistic events, reflecting the local environment and including local organisations in collaborative programmes. It aims to promote the arts through awareness, education, entertainment and collaboration. “The Clonmel Arts Festival is intrinsic to the town. The arts are appreciated, developed and encouraged here,” Comdt Killian told the meeting.

Clonmel Arts Festival has put together a strong, cohesive board of directors that have a significant range of expertise and experience, putting the necessary measures in place to make the festival’s mission a reality. “We have experienced some terrific events, great comedy, music and some international events that we wouldn't normally see in Clonmel thanks to the Arts Festival. Nothing stays the same forever and in the last two or three years there has been a  strong feeling among the board members that it's time for change. A lot of change has happened the last couple of months,” Comdt Killian continued.

“The role of festival director is now full-time because we don't want the Clonmel Arts Festival to be one week a year and then we all forget about it. We have plans for a big spring event in March, a big autumn event and a chain of smaller artistic events throughout the year. We are tired of people saying 'there's always something on in Kilkenny'. We want them saying 'there's always something on in Clonmel'.”

Clonmel Arts Festival’s Strategic Plan 2018-2021 has been accepted by the Arts Council, with a comprehensive operations plan in place for this year’s festival. A new constitution and articles of association are in place, with robust governance mechanisms created to comply with all current legislation. The festival’s new offices are based at Place4U.

“We have developed our relationship with the Arts Council and feel that we are in a different place now. We have evolved a lot, but we also think that we need to evolve further and be a stronger festival. We are one of the eight strategic festivals in Ireland as classified by the Arts Council, so we are in the premiership. If we drop out and down to the first division, it has massive implications for funding,” Comdt Killian explained.

Comdt Killian said Clonmel Arts Festival has benefited the town in many ways and can continue to do so. The 2018 festival contributed at least €550,000 to the local economy. 320 bed-nights were taken up during the festival period, with thousands of people from all over the world visiting the festival website and related local websites. Both national and secondary schools in the area benefited from artistic projects, along with Clonmel audiences being exposed to top national and international artists and events. Clonmel and its environs received a morale booster and retained a feel-good factor, with the festival and local community receiving significant media exposure on a national basis. Comdt Killian underlined that the festival effort also enabled various bodies and entities in the area to engage in partnerships.

Comdt Killian said that through a combination of funding from the Arts Council, Tipperary County Council and sponsors, public support for the festival will naturally grow. The festival aims to be ambitious in attracting big international artists and events, continuously increasing the community’s appreciation of all aspects of the arts. Theatre, music, visual art, community events around the town, spoken word by poets, participation and literature are among the options currently being considered for the 2019 festival programme.

“Our ambitions are very much tied up with the support Tipperary County Council can give us. We really do appreciate the support we have gotten from the local authority in the past  and it means so much to us.

“Funding and the arts are intrinsically entwined. The arts - promotion and staging - costs money, and we are looking for a significant sum of money from Tipperary County Council to fund the arts because it's expensive. We are a little disappointed that we received the same amount again this year because we thought we would do better. €90,000 is an awful lot of money and you could say that we can't compare ourselves to Galway or Wexford, but we can compare ourselves to Carlow who get more. There's sort of a chicken and egg situation here. We will only put pressure on the Arts Council to give us extra money if we are producing a better show every year and we need Tipperary County Council’s help in doing that.

“We have a very sound plan and know where we are going. Our ambition is for the Clonmel Arts Festival to rank with any festival.

“We are looking for up to ten sponsors who will commit for three to five years and that will allow us to plan strategically. We would also like to build a treasure chest for ourselves so if something big comes along we can go and get it, bringing something really unusual to to Clonmel.

“We hope to have a bigger launch this year so that it has a bigger impact and makes people aware of what's happening,” he added.