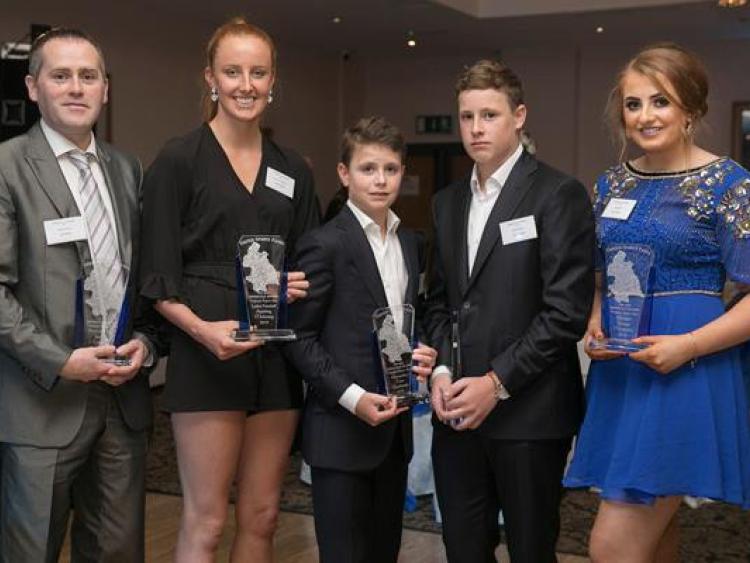 The finest achievements of amateur sports people in Tipperary in the past year were celebrated at the presentation of the Annerville awards at the Clonmel Park Hotel last Saturday night.

At its annual dinner, the Tipperary United Sports Panel presented 15 awards across a range of disciplines.

Liam Cahill, who masterminded Tipperary’s success in the All-Ireland U-21 hurling championship, was chosen for the Sean Lyons Sports Executive Award, which is named after a founding member of the Panel.

St. Michael’s soccer star Christopher Higgins was selected for his second major honour in the space of 12 months. The captain of Ireland’s junior soccer team was also named  as the FAI’s Junior International Player of the Year in 2018.

The Wachman brothers, Max and Tom, were on Irish showjumping teams that enjoyed significant successes at U-16 Nations Cup events in Belgium and Germany, while ladies footballer Aishling Moloney was a key player in successful Tipperary, Cahir and Dublin City University teams.

Athlete Miriam Daly won four gold medals and represented her country at the Youth Olympics in Argentina and the European Youth Championships in Hungary.

It was also a very special night for Ardfinnan, as two Gaelic games greats from the village were honoured. Michael ‘Babs’ Keating received the Knocknagow Award, which each year is presented to a sportsperson of the past, while Pete Savage won the Jimmy Cooney Lifetime Achievement award, which is named after a former member of the United Sports Panel.

These annual awards were first presented in 1960, and since 1964 have been sponsored by Bulmers.
Pat Morrissey, Group Operations Director of the C&C Group, said the company was very proud and honoured to be associated with the awards for 54 years.

C&C provides an amount of sponsorship, including this year’s Cheltenham horse racing festival, Glasgow Celtic football club and ladies football. However Mr. Morrissey said that its sponsorship of the Annerville awards was one of the most important, because it recognised minority sports and was local in Tipperary.

Cathaoirleach of Tipperary County Council Mattie Ryan said that the annual awards scheme recognised the very best of what was good about Tipperary. “It defines who we are as sporting people and plays an influential role in the promotion of sport in Tipperary."

As well as the “huge variety” of sports being honoured from all across the county, he said that the Sports Executive and Lifetime Achievement awards recognised those who had made an immense contribution to the development of sport throughout the county. He said that Liam Cahill and Pete Savage were worthy recipients of both of those awards.

Michael ‘Babs’ Keating, who was chosen for the Knocknagow Award, was widely regarded as one of the finest hurlers and footballers of his generation. “It is said that ‘desire is the key to motivation; but it is determination and commitment to an unrelenting pursuit of your goal - a commitment to excellence - that will enable you to attain the success you seek."

Cllr. Ryan said that those attributes truly reflected the character traits of the awards recipients. “It is only fitting and proper that you are honoured here tonight when you consider your individual contributions and achievements in your sport in 2018. I sincerely congratulate each of you and wish you the very best of luck in your sporting careers. Hopefully this will act as the catalyst for future honours for each of you," said the Kilcommon man.

He publicly acknowledged and recognised the important contribution of the United Sports Panel, and its place in Tipperary life, ever since its first meeting was held in the Slievenamon Hotel in Parnell Street, Clonmel in December 1959.

He said that the panel was the first of its kind outside of Dublin and they have honoured amateur sports stars in Tipperary every year since.

He also acknowledged the commitment and work of the United Sports Panel committee, who he said “effortlessly volunteer year in, year out to ensure that this event continues to be celebrated as one of the highlights of the Tipperary sporting year”.

Cllr. Ryan also paid tribute to Bulmers’ association with the annual awards. He said that since 1964 the company had been loyal sponsors of the awards, which had been widely known as the Cidona awards before the name was changed to Annerville in recent years. “I have no doubt this sponsorship has been invaluable to the longevity of the awards and is greatly appreciated," he stated.