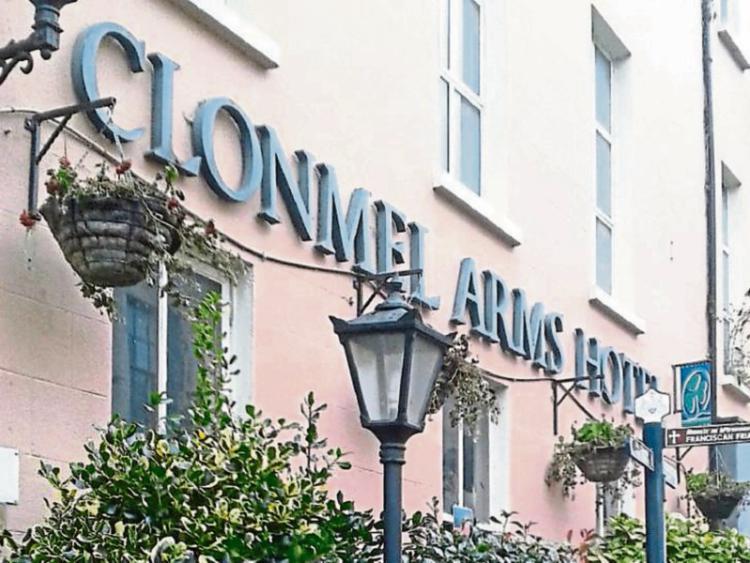 The proposed re-development of the Clonmel Arms Hotel, for which planning permission has been sought, is very welcome news for the town.

This is a most attractive building in the town centre and thus achieving the best possible development is not only important in the context of commercial viability, but also architecturally and environmentally.

Sarsfield Street is one of the four original medieval streets of Clonmel. It has had several changes in name, all reflecting its practical function or the history and politics of the time. It started as Watergate and was enclosed by a wall and a gate on the river side. This was, more or less, the case until the Corporation removed 21 feet of wall in the early 1940s. This may well have been a section of the old fortifications of the town but at the time no archaeological study was commissioned.

In time it became Boate Street, perhaps because of the periodic flooding which occurred even into modern times. It was changed again during the wars with Napoleon, when it was called Duncan Street in honour of Admiral Duncan’s victories on the battlefields. In a predominantly nationalist Corporation at the turn of the 19th/20th century, there was a widespread change of street-names, when Duncan became Sarsfield.

The eastern side of the medieval street was bordered by the monastic land of the Franciscans. After the dissolution, and the banishing of the Friars, this land was sold to the “Sovereign and Commonality of Clonmel” (the equivalent of the Corporation) by the then Earl of Ormonde. But it would appear that the area became an important place to the people of the town, where they met to pray and bury their dead. All of that changed again in Cromwellian times when a fort was built on the site.

Again times change and during the second half of the 18th century and the pre-Great Famine decades of the 19th, the town rapidly grew in size and prosperity. The present very handsome four-storey houses, on both the eastern and western sides of the street, were built by Perrys and Bagwells, both of whom were in business in the town. These add a certain architectural character to the town-centre, with their flights of steps, their attractive railings, doorways and fanlights. These developments also took place following a time of street-widening, and the only street which seems to have retained its medieval dimensions is East Gate Street/Hawke Street/ Dublin Street - now Mitchel Street or the Narrow Street (“Narra” to native Clonmellians).
By now, Riall’s Bank was well-established in the street, with its distinctive cut-limestone facade and its well-proportioned doors and windows. It is a dignified facade, reflecting the ambience of the bank itself, and it is a distinctive feature which has to be retained in any re-development.

The bank was privately owned during a period when such ownership was the norm. It had been established in the late 1750s by two brothers, William and Phineas Riall, both of whom were Dissenters. It would appear that at the time Dissenters had a monopoly in banking. It would appear that at the time Dissenters had a monopoloy in banking. While a number of other private banks operated in the town at the time, Riall’s Bank was the most reputable and successful, and became the Corporation’s bank. It also took the risk of loaning money to the erst-while struggling pedlar-boy, Charles Bianconi, when he was establishing his picture-framing business in his shop at the nearby corner of Gladstone/Mitchel Street. The other banks in the town had refused such facilities, but the Riall’s recognised his potential as a successful entrepreneur. “They acted towards me with fatherly kindness,” Bianconi subsequently wrote. Modern bankers, please note!

The inevitable crisis in banking occurred post the Napoleonic wars, during which business was adversely affected and many people lost their money. Though Riall’s ultimately met all its liabilities, the bank closed. The last of the Clonmel Rialls, Augustus, died at his home in Heywood House, during World War I.

In 1825 the Provincial Bank moved into the then Duncan Street premises and conducted business there, in the re-named Sarsfield Street, until the second half of the last century, when the premises and some neighbouring houses were converted into the Clonmel Arms Hotel.

Older Clonmel citizens will remember the very attractive main bank office, with its stucco work, its splendid mass of gleaming mahogany counter and its shining brass. They do not build banks like that anymore! The main stairway in the hotel, which had also been inherited from the bank, was unique in design and workmanship and if it has weathered the years of neglect, it deserves conservation and inclusion in any modern development.

The prospect of bringing back life, activity and business into a building that has served Clonmel so well over the centuries must be welcomed. And the fact that this is happening in a street as old as the town itself imposes imaginative, and indeed very attractive, challenges to modern planners and designers and builders and craftspeople. Their work will survive for many more centuries in Sarsfield Street. Or will the street have another change of name in some remote future?