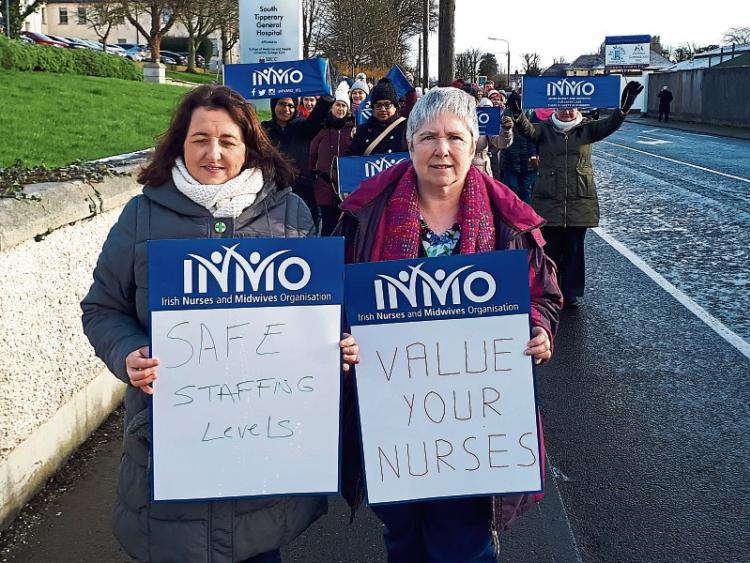 Nurses protesting outside South Tipperary General Hospital (STGH) are part of the nationwide campaign against under-staffing, but they point out that there are particular problems in the Clonmel hospital that need to be addressed.

And that problem will become more acute when the planned modular unit is in operation.

“That unit needs to be staffed and where will they find the nurses,” asked Odette O'Connor.

“That will be a big issue. The build will be provided but where will the nurses be found,” she added.

She said the HSE has begun a recruitment drive for nurses for South Tipperary General Hospital's new 40 bed modular unit but she claimed it was having difficulty hiring the number of nurses needed for the unit.

Compounding this was the fact there was already a shortage of nursing staff on the existing wards in the hospital.

She said when the HSE did recruit nurses for STGH and other hospitals it found it difficult to retain them because of the stressful working conditions and pay.

"The pay scale is the biggest barrier to recruiting and retaining nurses. The staffing and pay issues are interconnected," Ms Curran argued.

Speaking on the picket line, Odette O'Connor also raised concerns over staffing levels and bed capacity in South Tipperary General Hospital that are specific to the hospital. She pointed out that the hospital has 168 in-patients beds, a very busy emergency department and at any time there could be twenty to thirty five people waiting for a bed.

“So that percentage to our overall in-patient bed capacity is very high,” she said.

“Compare that to Cork or one of the big Dublin hospitals where you would have four, five or six hundred in-patient beds and with an overflow of 40 to 45 people it means their percentage is much lower and has less of an impact than in Clonmel. The impact for us is absolutely huge.

“We would have to discharge 30 per cent of our in-patient population to accommodate the overflow and that is not possible with the complexity and illness level of the patients already in beds. I don't think this has been emphasised enough.”

Nurse O'Connor paid tribute to the support they had received from their professional colleagues when speaking on the first day of the strike. She said contingency plans had been drawn up to make sure patients were safely looked after and they had to draw on some of the picketing nurses to ensure that.

The emergency department had also been supplemented with extra doctors from the medical staff and surgical team in a plan put in place by the hospital management.

“We received good support in a very supportive environment and all the patients in our care were safe,” she added.