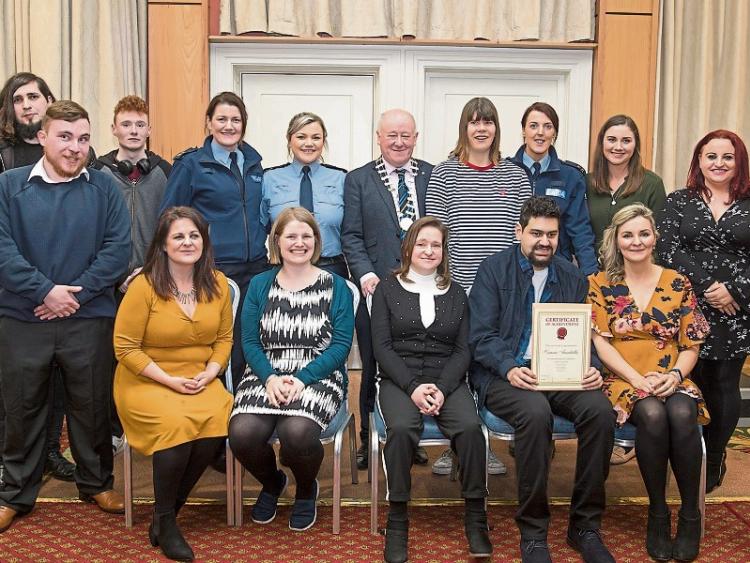 The “immense contribution” of service users at RehabCare Clonmel, County Tipperary, was recognised at its annual award nights in Hotel Minella recently.

“You have made both the service and your families very proud,” said RehabCare community services manager Miriam Cleary in her opening address to the gathering.

“The awards not only celebrate the achievements of the service users but also give due regard to the values and principles of which these awardees exemplify, such as hard work, motivation and ambition for learning. Awards are a way in which we can encourage and acknowledge these realisations.”

Awardees received their certificates for completing courses in food safety, literacy, numeracy, computer and IT skills, and programme participation. Others excelled in sports, arts and social events, while some service users took part in work placements at businesses including Abbott, Boston Scientific and Tesco.

Boston Scientific supervisor Darren Gayson, who headed up an initiative which saw RehabCare service users visit the Clonmel site on work experience, paid tribute to the “unbelievable” awardees. Mr Gayson, who suffers from dyslexia, short-term memory loss and had a speech impediment as a child, said Boston Scientific is committed to making the transition into the workplace “seamless” for people with disabilities.

“We had some placements in the areas of logistics and packing of employee gifts [as part of our 20th anniversary celebrations last year]. That was over 900 jackets - different shapes, colours and sizes - all packed by the service users. It wasn’t easy and was probably the hardest work I have done in the last five years,” he smiled.

“RehabCare users came up on the site for three days and the work that they done was unbelievable. What I really enjoyed was that everyone worked towards their strengths and abilities. People who were good at looking down through the list to see what jackets were needed were able to sit down and do that. Those who had the strength to stand up and talk in front of people called out what jackets were needed next. And the people who wanted to burn off a load of energy like myself were able to run around collecting all the jackets. It was a fantastic opportunity and the craic was thoroughly enjoyed by everyone,” he fondly recalled.

Some of the service users also took part in an “extremely successful” wellness programme with Boston Scientific personal trainer Niamh O’Connor, which “changed participants lives from a wellness perspective”.

Mayor of the Clonmel Borough District Cllr Richie Molloy, who is the area manager with Family Carers Ireland, praised the “great work” of RehabCare and its users on what was a “very important night”. He added: “You deserve great recognition for the work that you do. A huge amount of work goes into doing any course and a lot of people drop out of courses as they go along. The very fact that you are receiving these certificates shows that you put in the 150 percent that’s really needed to complete them.”