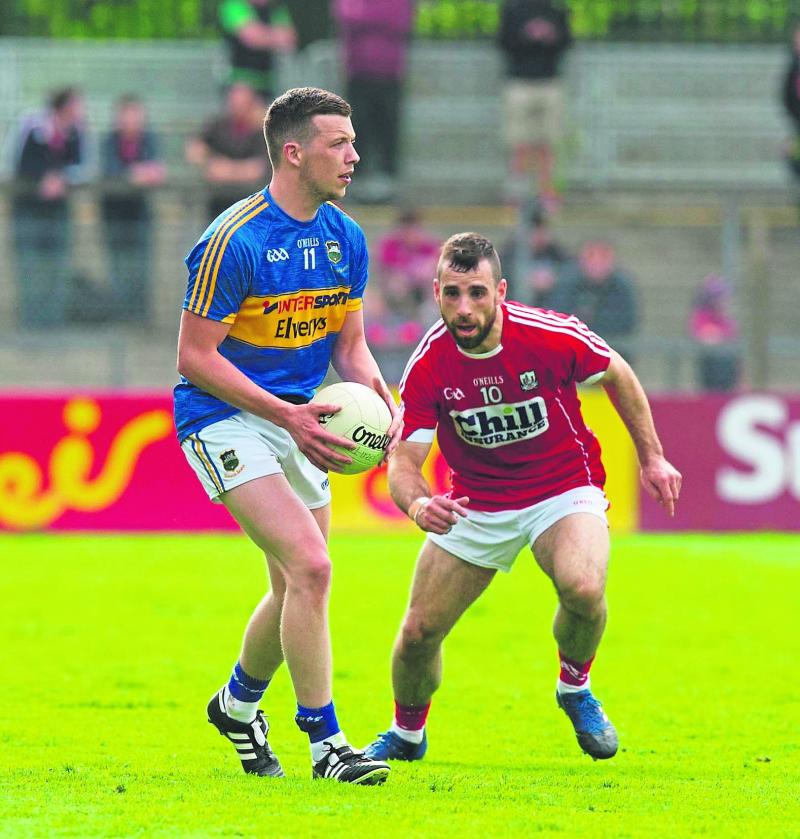 Moyle Rovers Liam Boland who scored a brilliant goal for Tipperary against Kildare at Newbridge today.

Saturday's defeat at the hands of Kildare at Newbridge now means that Tipperary’s place in Division 2 of the National Football League is no longer in their own hands with one more game to come - at home to Clare in Thurles on Sunday next.

The Premier County’s fourth defeat in six games now means that they must beat Clare but also hope that Cork fail to win on their visit to the Gaelic Grounds in Armagh. A draw for Tipperary on Sunday next will see them relegated; and even if they do win and Cork also win, Tipperary would be demoted (both would have the same points but Cork won the head-to-head between the sides).

Against Kildare, it must be said that at times Tipperary didn’t really look like a team that deserved to stay up, so dominant were the Lily Whites who went in at the break leading by 1-7 to 0-2. But then at other times Tipperary did string together some exciting passages of play that says they are capable of operating at this level.

Playing with the advantage of a gale force wind the home side seemed to be more fired up for the battle from the start. They took the game to Tipperary at pace in attack and worked extra-hard to keep Tipp pinned back in their own half when the visitors did manage get their hands on the ball.

But despite their territorial dominance and the amount of time Kildare were on the ball in the opening half, Tipp were doing reasonably well to be trailing by just three points 0-5 to 0-2 after 26 minutes.

However, a well-worked goal by Fergal Conway in the 33rd minute gave Kildare the breathing space they required, and two further points in time added-on in the first half sent Cian O’Neill’s side to the break with a massive eight points lead. It left Tipperary with the proverbial mountain to climb thereafter.

Tipp’s only point from play in the first half came in 26th minute from Liam Casey after Steven O’Brien’s good work in the build-up. Liam McGrath had a close-in 10th minute free (after Conor Sweeney was fouled) for the visitors only other score of the opening 35 minutes.

Kildare, now playing against the strong wind, had the first score of the second period to go nine up and they were still seven points to the good at 1-9 to 0-5 with just 13 minutes to remaining- Tipp’s opening three points of the second period all came from Conor Sweeney frees.

But then an unforeseen revival occurred that amazingly would take Tipp back to parity by the 70th minute, only for Kildare to snatch what was, in all fairness, a deserved win with two late points in added-time against the strong wind.

Tipperary’s Liam Boland - only on the field about three minutes - got the Tipp revival going with a superb goal from 15 metres out 10 minutes from time. A long diagonal ball played in by Michael Quinlivan was won by Conor Sweeney who put it back into the middle where Boland collected it and blasted high to the roof of the net. It was a brilliant finish by the Moyle Rovers man who hasn’t been having the best of luck this season so far, but is such a capable scorer. Hopefully it will give his confidence a big boost for the rest of the year.

The second goal came two minutes from the end of normal time from another substitute Dan O’Meara. Conor Sweeney muscled in on a short free deep in the Kildare territory and sent a great pass into to O’Meara. The Kiladangan forward kept his composure well to slip a low effort into the far corner of Mark Donnellan’s net.

Suddenly it was 1-9 to 2-5 but not for long. Amazingly Brian Fox added a great solo point in the 70th minute to level matters and temporarily stun the home support in St. Conleth’s Park.

Full credit to Kildare though, they didn't panic and they retrieved what would have been a total disaster for them had they failed to win this game. Adam Tyrrell, himself a very influential second half sub, kicked a great left legged point to edge them one up. And this was quickly followed by another from Neil Flynn, one of their best on the day, who kicked a 45 into the wind  to save the home side's blushes.

Liam Boland had the last score of the day for Tipperary to bring it back to the minimum but there was time for no more.

Tipperary came away empty handed and can really have no complaints. Had they gotten a result - and we wouldn’t have complained - it would have been daylight robbery. They can however take the positives from the game, the spirited fightback and the re-introduction of some previously injured players, such as Michael Quinlivan, Paul Maher, Paudie Feehan and Shane O'Connell was also togged but didn't feature.

But there is also plenty to work on for Sunday next. The count from their own kick-outs was just about 50-50 at best, and Kildare cut through the centre a little too often with intricate triangles that had Tipperary at sea at times. The wide count was heavily weighted towards Kildare also, and had the Lily Whites been more accurate in front of goal in the second half, they would have made life an awful lot easier for themselves too.

Liam Kearns' side must now head for Semple Stadium next Sunday and do all that they can to win. After that their destiny is out of their own hands. But they deserve a break that they haven’t had all league long. They might get it next time out. Don’t write them off just yet.