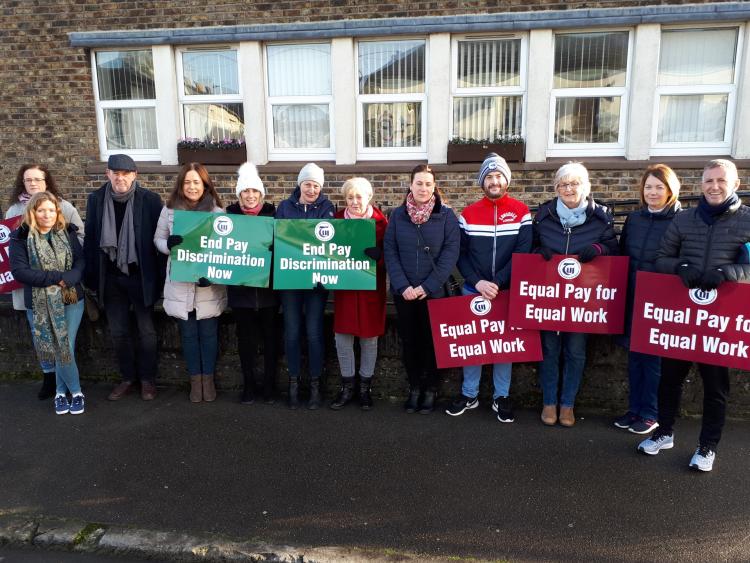 “The next Government needs to look at the inequalities across education,” says a Clonmel, County Tipperary, tutor on strike over pay inequality.

A dozen staff at the Tipperary Education and Training Board's Adult Education Centre in Clonmel are among the 19,000 members of the Teachers’ Union of Ireland (TUI) in centres of adult and further education, colleges, institutes of technology, and secondary schools on the picket line across Ireland this Tuesday over "pay discrimination."

According to the TUI, the strike relates to a two-tier pay system unilaterally imposed in 2011. At second level, a teacher employed after February 1, 2012, earns 14% less on initial appointment and 10% less over the first ten years of their career, which amounts to over €50,000 at a time when they most need the money.

“Those taken on prior to 2011 are on a different pay scale to those taken on after 2011. People are doing the same work with the same terms and conditions and yet their pay is completely different. People are trying to catch up with others in terms of getting mortgages and keeping up with the cost of living, which is extremely difficult at the moment,” says Adult Education Centre tutor Pat Hoban.

Mr. Hoban says the union has made numerous efforts to resolve the issue. Last autumn, TUI members voted by an overwhelming 92% to 8% to engage in a campaign of industrial action, up to and including strike action, on this issue, with the union signalling in November its intention to take strike action in February.

“The union has stated that this could be one of many strikes, which is going to be a challenge for the incoming Government. The union has knocked on a lot of doors and hasn’t gotten through to anyone. If people won’t listen, we have recourse to strike and our membership has voted overwhelmingly to strike,” he says.

Mr. Hoban says the two-tier pay system is stopping teachers taking up posts. The findings of a survey of secondary school principals last week showed that almost four in five schools have advertised positions for which no teacher has applied, while over half have unfilled vacancies due to recruitment and retention issues.

“Most new teachers are on very short hours, the nature of the work is precarious and a lot of them are on social welfare over the summer. There are a lot of schools who have advertised posts and can’t fill them, which is down to the precariousness of the situation and lack of pay,” says Mr. Hoban.

“In terms of adult education, there is other pay discrimination in terms of contracts. For example, there are no terms and conditions negotiated for adult literacy tutors. We are on hourly rates and social welfare during the summer, at Christmas and Easter. It’s an ongoing issue across the whole of education.”

The TUI express regret for any inconvenience caused to students and their families over the strike action, but states that a continuation of pay discrimination risks inflicting further damage on the education system. Mr. Hoban says students at the Adult Education Centre in Clonmel support this Tuesday’s strike action, highlighting that the two-tier pay system is damaging staff morale.

“It affects staff morale when you have two teachers doing the same work but on a different pay scale. And it affects your self-esteem when it comes to day-to-day work,” he continues.