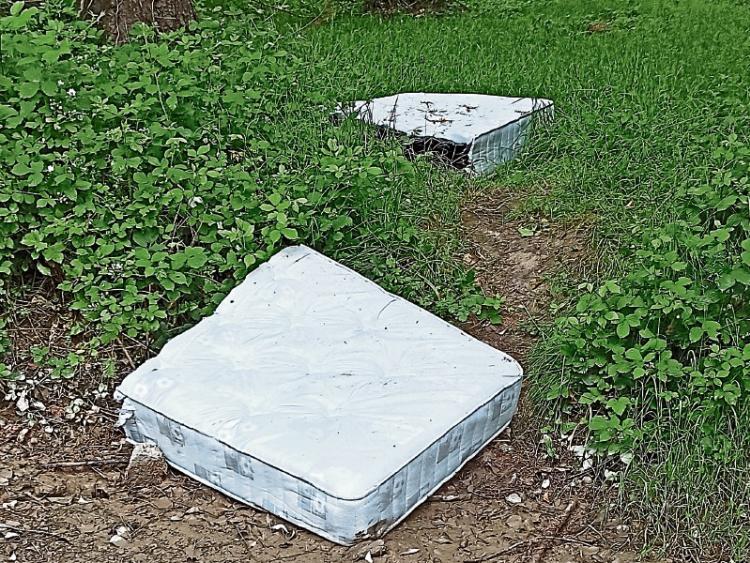 Some of the illegal dumping that has taken place at Carey's Castle outside Clonmel.

“embarassment”  after it was turned into a rubbish tip in recent weeks.

The area around Carey’s Castle and Cannon Woods had also been used as a toilet, making the location not only unsightly but also unhygienic.

Karn Cliffe says it’s with a heavy heart that she describes the condition of the woodlands of her childhood.

As she lives beyond the 5km limit of Clonmel, she was unable to avail of of the beauty of the woods and castle ruins during the Covid 19 travel restrictions.

So when she did get to visit last week with her young nieces and nephews, she was horrified by what she witnessed.

The devastation that met me is really beyond comprehension”, she says.

“While the country was in lockdown and under attack from a deadly virus, people who were lucky to live within the 2km and more recently 5km limits of Canon Woods wreaked their own havoc.

“I have been walking in the woods for decades and at times it is untidy in areas, particularly around the castle, but what I and my family were met with  was heartbreaking.”

She said there was a mattress in the car park and domestic waste thrown along the path.

And she continued - “The worst of the rubbish was in the surrounds of Carey’s Castle.

“The kids normally love climbing through the old ruins.”

She added: “This was not possible. Remnants of a bush fire were laden with empty bottles.

“The tower and chapel area were disgusting and evidently used as a toilet.

“Toilet paper covered in human faeces was evident in the ruins of the chapel.

“Further along bottles and cans were strewn haphazardly into the river. Not only is this unsightly but also a public health concern, and a threat to the environment and woodland animals.”

Ms Clliffe accepts the vast majority of people who visit the woodlands respect it for the beauty it holds.

“Unfortunately others are not so environmentally friendly and incredibly disrespectful, selfish and ignorant.

“I am not sure if the Cannon Woods come under the remit of the Waterford or Tipperary council but something needs to be done to prevent further atrocities.

“Triadvisor and Coilte rate it very highly and advise it as an area to visit and enjoy. In its current state it truly is an embarrassment.”

After reporting the incident to Coillte, she said she was happy that they replied that they will arrange for the area to be cleaned up as soon  as possible.