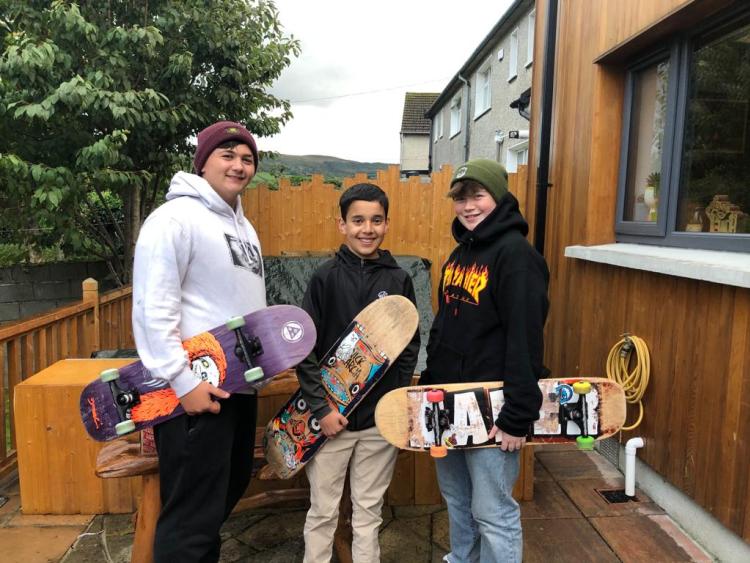 Ryan Farrell, Oishin Molloy and Rian O'Shea are excited about plans for a Clonmel skateboarding park

A group of friends are excited about the development of a skateboarding park in Clonmel, Tipperary.

Tipperary County Council has secured provisional funding approval of over €5 million from the Department of Housing, Planning and Local Government under the Urban Regeneration and Development Fund for the Clonmel Regional Sports Hub project at the Limerick Institute of Technology campus.

The funding will go towards a mix of athletics, cycling and outdoor recreational facilities, which include a skateboarding park and playground.

The appointed design team is currently progressing the tender competition for the construction phase. It is hoped that final funding approval will be obtained from the Department before the end of 2020, allowing for construction on the project to commence thereafter.

CBS High School’s Rian O’Shea says the new skateboarding park will encourage others to get involved in the sport, while also decreasing anti-social behaviour. “There’s a big crowd of us who get together and skateboard every few days. And there are also loads of people who want to skateboard but don’t because there are no facilities in Clonmel at present,” Rian says.

“There’s literally nothing to do in Clonmel for young people who are not into sports like GAA and soccer. They just wander around town,” 15-year-old Rian says.

CBS High School’s Ryan Farrell says the skateboarding community is a “positive environment” for young people. “No one judges you. If you are new to skating, experienced skaters will give you tips on what to do,” Ryan says.

Ryan hopes that the new skateboarding park will lead to the creation of an official club in Clonmel. “At the moment we are learning from each other and from YouTube tutorials,” the 15-year-old says.

“We go skating in car parks around the town, but we get kicked out after half an hour. We sometimes go to skateboarding parks in Thurles and Waterford, but it will be nice to have a place on our doorstep where we can go skateboarding without any hassle or fear of getting in trouble.”

Oishin Molloy says the experience of travelling to skateboarding parks in the region is “class”, whereas at present there is a “really bad vibe” towards skateboarders in Clonmel.

“Everyone is always so nice and welcoming at the parks, but we feel threatened skateboarding around Clonmel at the moment. We are just a group of friends who always mind our own business and want to skateboard,” 14-year-old Oishin says.

Oishin says the new park will also benefit those interested in BMXs and scooters, and feels that the creation of a local club could open up a world of opportunities. “We could practise in Clonmel, and then organise trips to other parks and camps abroad. It would be really fun,” he adds.

“When Mulcahy Park was being proposed, the perception from the officials was that there were very few children who use these parks and that they are more interested in computers. And yet, since the money was put into that park it is thronged every day of the week,” he says.

The Clonmel councillor adds that the park will be a “great benefit” to the town.

“The new skateboarding park will give young people the chance to try it out and it will give them an outlet,” Cllr Molloy says.

“A club could be formed that could challenge nearby clubs. The skateboarding park could be the start of a whole new industry of sport in the town and it will be money well spent,” he adds.