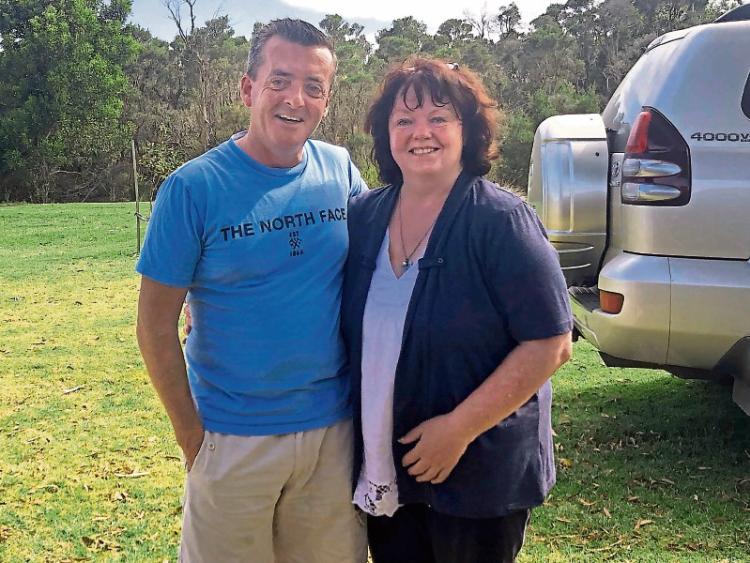 Tipperary's Ciaran Hayes and Helen Lawrence down under in Australia

Tipperary man Ciaran Hayes sent us this note of his chance meeting while camping in Victoria, Australia.

“I log on to the Fethard website every day without fail and really enjoy keeping up to date with the going-on around town. In fact, I often have news here before my mother at home knows, thanks to the website!

"My wife Natalie and our two sons, Charlie and Harry, have been living in Melbourne now for two years. We were recently on a camping trip to a place called Port Welshpool in Victoria which is looking onto Wilsons Prom National Park – the southernmost part of Australia. A few days after setting up camp two vehicles pull up beside us and the group attempted to erect a few tents. It was a hot but windy day and, to say the least, tents and wind don't normally gel very well.

"When I heard a Cork accent, I decided to offer my services and give a helping hand. 'Where are you from?' was the question asked. My answer was ‘Fethard!’,which initiated the following response: 'Mam, this fella is from Fethard too!'

"We had never met before, but I certainly knew whom she was from the moment I saw her. Helen Lawrence, who had left Fethard 40 years previously when she married a Cork man and moved to Kilworth. She then moved to Melbourne where she has lived for the past 25 years with her family. It was most enjoyable discussing locals from home, while also trying to stop a tent from heading towards Tasmania! We took a photo to mark the occasion.”