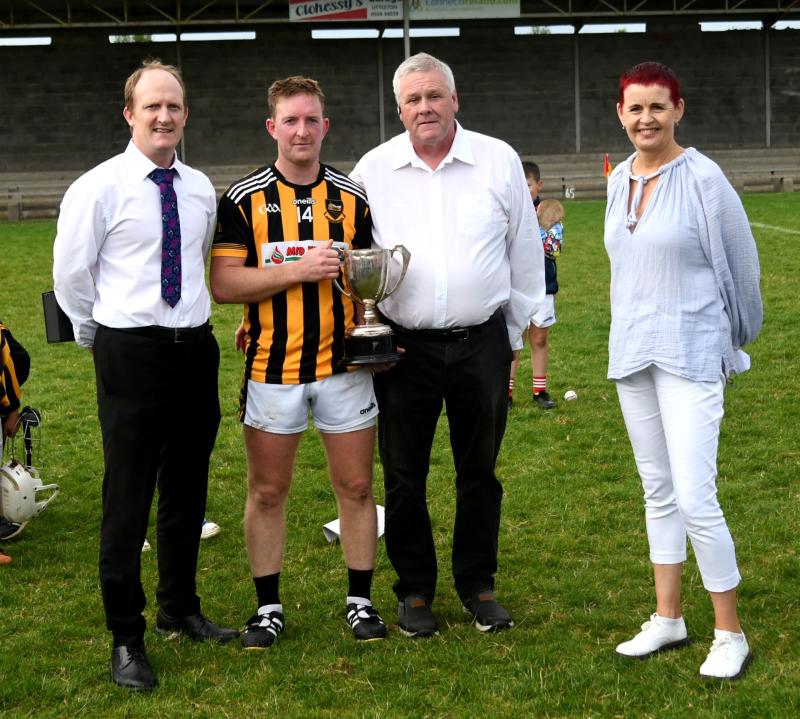 Fancied Upperchurch-Drombane bagged two last quarter goals to claim the Thurles Credit Union Mid Tipperary junior hurling A title at Littleton on Saturday where they saw of the considerable challenge of Thurles Sarsfields in an entertaining encounter.

Beaten finalists last year, Upperchurch left nothing to chance this time and while their second goal came in injury time, there was no disputing they were the stronger side, fully deserving of the honour. Indeed they look to have the potential to add the county title to the divisional one.

Sarsfields played their part admirably in a competitive encounter that tipped in Upperchurch’s favour with Conor Fahey’s first goal, after 46 minutes which put his side 1-11 to 0-9 clear. Up to that Sarsfields, despite a disastrous start which saw them fall five points behind ten minutes, were trading blow for blow with their rivals but Upperchurch had the greater range of options when it came leadership on the field, and scoring options.

The Church opened with a flourish. Pat Shortt was the danger man with three points as they raced five clear of an unsettled Sarsfields side but once the Thurles lads found their feet, they steadily reeled in their opponents with Robbie Stapleton and Aidan Stakelum to the fore to draw level(0-8 each) with Stapleton’s fifth point of the half as the game drifted into injury time.

However, Pat Ryan had the final say for Upperchurch cutting a sideline ball over the bar for a 0-9 to 0-8 lead at half-time.

Sarsfields had to be happy with their second quarter recovery but Upperchurch were still in the driving seat as underlined by Loughlin Ryan and Dean Carew points early in the second half. Robbie Stapleton responded for Sars but the crucial goal came in the 46th minute when Conor Fahey showed great pace and control to scythe through the Sarsfields defence for an Upperchurch goal and a 1-11 to 0-9 lead.

The ball was now in Upperchurch’s court and they stretched their advantage to 1-15 to 0-11 with five minutes to play.

Back came Sarsfields with points from Robbie Stapleton, Mathew Kelly and Aidan Doyle to be just four behind going into injury time. Upperchurch held their nerve and Fahey notched his and his side’s second goal in injury time after being set up by James Barry.

Urban Nolan had a point for Sarsfields but it was too late to spark a final rally.