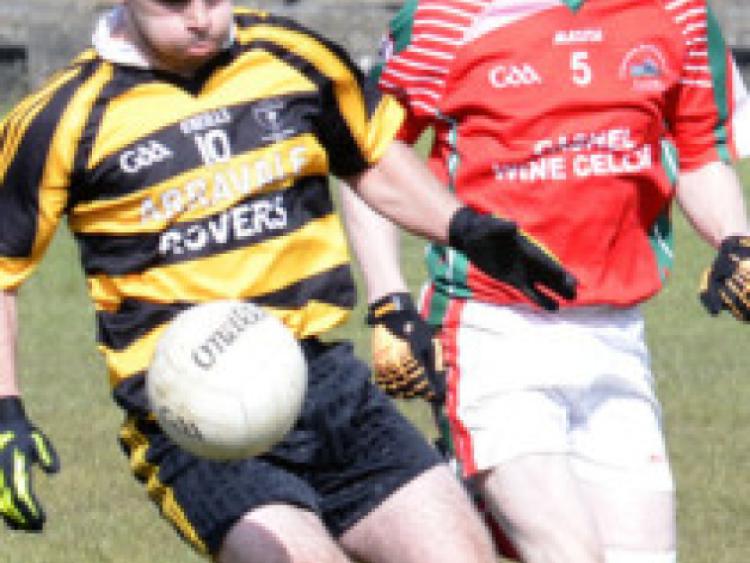 Cashel opened with a point from a free by Seamus Reade after two minutes but James Hogan levelled almost immediately. Then Johnny Lowry and Seamus Reade swopped points to leave the sides level after ten minutes. Arravale Rovers tagged on three unanswewred points from Tony Burns, Darragh Coughlan and James Hogan to lead 0-5 to 0-2 at the end of the first quarter. The Cashel half back line had difficulty with the Rovers half forward trio where Paddy Dalton was orchestrating most attacks. Dalton and James Kinane set up Diarmuid O’Donnell to cooly slot home a goal for the Rovers after eighteen minutes. From here on it was all one way traffic. Paddy Dalton, John Lowry and James Hogan pointed Arravale Rovers further ahead and Seamus Reade replied for Cashel to leave the Rovers ahead 1-8 to 0-4 at the break, really a scant reflection on their superiority.

Captain Shane Lowry led by example with his brother Donagh and Peter Mulhair effectively closing out the Cashel attackers.

The second half began again as the first half, with Ger Slattery pointing a free for Cashel. However they failed to raise a flag for the next twenty minutes, again Ger Slattery pointing a free after twenty four minutes of the second half. Meanwhile Arravale Rovers continued to add ten points – six from the boot of their excellent place kicker, James Hogan (five from frees), James Kinane chipped in with two and Shane Leahy and Paddy Dalton scored one each. Cashel’s goal came from a long ball delivered in from Seamus Reade, the Rovers keeper caught but dropped the ball and in the confusion Seamus Reade followed up to send the ball to the net. This left the final score Arravale Rovers 1-18 Cashel K C 1-6.

It was a fine team performance in the circumstances by Arravale Rovers. They were the better organised and more skilfull outfit and Cashel struggled to keep up with the pace of their opponents, but a word of caution, this Rovers performance will not suffice against better opposition.

A minute’s silence was observed before the game as a mark of respect for Sean Doyle (RIP), brother of Cashel K.C. U21 F manager Michael Doyle.