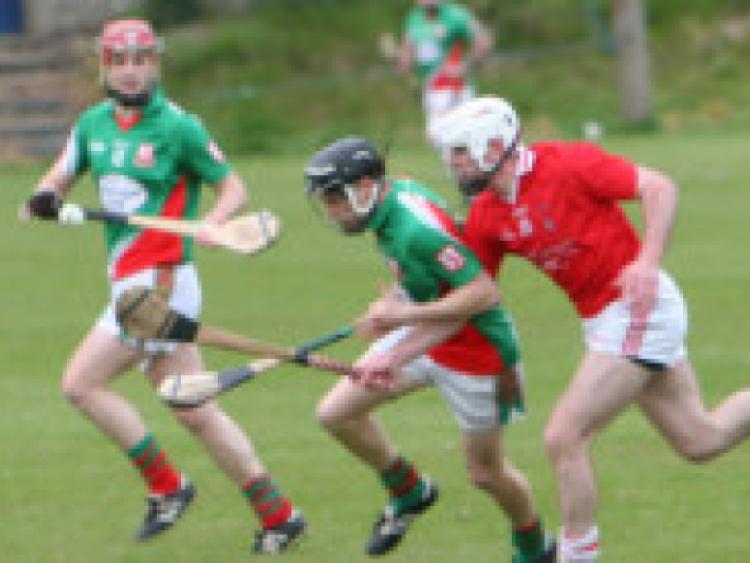 Champions Mullinahone proved too strong for Carrick Davins in the South Tipperary senior hurling championship at Fethard, winning 2-17 to 0-15.

Champions Mullinahone proved too strong for Carrick Davins in the South Tipperary senior hurling championship at Fethard, winning 2-17 to 0-15.

Since early in the season the Davins full back line has been a cause of worry to them. In the Carrick derby it was Bill Walsh who exposed them. On Saturday it was the Horan-Kelly duo who struck in the first six minutes. Horan opened the scoring within a minute with a point. A minute later Eoin Kelly placed him for a goal. Horan goaled again in four minutes. Kelly pointed from play and Horan followed suit in six minutes.

The rest of the Mullinahone attack got in on the act and points followed from Sean Curran, Donal Cody and Eoin Fennelly. Eleven minutes gone and 2-6 on the scoreboard with nothing for the Davins.

Fair play to Davins they didn’t throw in the towel. Noel Butler opened their account with two points, but Eoin Kelly came back with one. Noel Butler and Eoin Kelly from a free exchanged points as Davins began to steady. A Davins mini rally was begun with a point from Lee Mackey from a long distance free. Stephen Cronin from distance and Stephen Moroney from a free narrowed the gap. J.J. Butler pointed in 22 minutes to leave the score 2-8 to 0-7.

However, Mullinahone put on a bit of a spurt and points from Sean Curran, Eoin Kelly, Sean Curran and Eoin Fennelly eased Mullinahone towards half time. Half way through the first half J.J. Ryan replaced Richie McGrath who was injured. Liam Mackey moved to full back where he did a fine job of curbing Eoin Kelly.

Mullinahone after their whirlwind start began to stand off Davins and allow them possession. After 26 minutes Davins’ Willie O’Dwyer saw yellow for a personal foul as he stopped Eoin Kelly on his way through. Half time score: Mullinahone C.JK. 2-12, Carrick Davins 0-7.

Davins’ position looked hopeless and got even worse in the fourth minute when Eoin Fennelly pointed. Next Friday Fennelly is in the Tipp U21 panel to play Limerick. Shane Butler pointed in four minutes and within a minute came a significant event - Mullinahone’s first wide of the game. They had gone through the entire first half scoring 2-12 and not having even a single wide.

Two Stephen Moroney points from frees and a point from play by Noel Butler pushed Davins into rallying range. A Donal Cody point steadied Mullinahone. Davins sought goals which they didn’t get with A.J. Cronin and Paul Curran clearing under pressure. Sean Curran caught a fine ball and pointed. Donal Cody pointed again to end the scoring in the 28th minute. A close in free to Davins was saved by Alan Walsh at the expense of a fruitless 65. Stephen Moroney was injured during added time and was replaced by Aaron O’Halloran. In spite of five minutes of added time much of which was taken up by injuries to two players there was no further scoring and Davins couldn’t find that goal which they so badly needed.