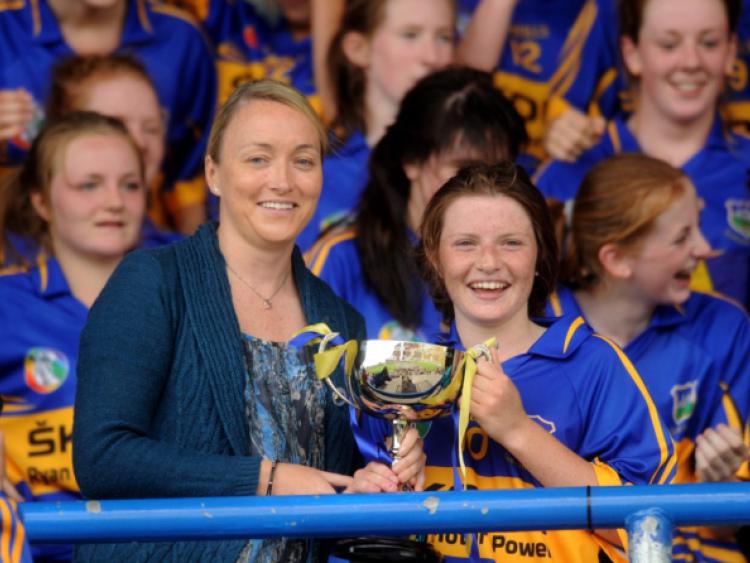 Tipperary won the All Ireland u-16 camogie title with a great win over Galway, 4-6 to 2-8, in the final at Portlaoise on Saturday

Tipperary won the All Ireland u-16 camogie title with a great win over Galway, 4-6 to 2-8, in the final at Portlaoise on Saturday

Niamh Treacy was the star of the show contributing 3-2 to her side’s tally.

Such was the fare on offer that the teams received a standing ovation as they left the field at half time, and were given another resounding cheer when returning to the pitch for the start of the second period.

The Munster champions dominated the opening half and led by 2-2 to 0-2 after 11 minutes. Treacy nabbed two goals and Tipp could have had more as Galway struggled to get to grips with their opponents all over the field.

Kelly Lenihan and Róisín Cahill picked up points, with the latter’s effort a goal-bound shot that was flicked over by Galway goalkeeper, Tara Murphy. Derbhla Higgins began to exert influence for the westerners though and Erica Coen and Taragh Moloney shared four points evenly.

The half finished with three goals and with Ciara Murphy finding the net either side of Sinéad Buckley’s clinical strike, the title was very much up for grabs at half time, with Tipperary’s lead reduced to 3-2 to 2-4.

Galway had the wind in their sails and despite facing into the wind hit the front with four points from the magnificent Murphy (two), Ciara Burke and Catherine Finnerty.

It was looking good for Galway but that was to reckon without Treacy, who completed her hat-trick from close range after Sinead Maher’s shot had been saved by Tara Murphy.

Tipp had only scored twice in 45 minutes and six times in 56 minutes but they were still level with four minutes remaining.

But Tipp turned the screw with the finishing line in sight. Two frees from Treacy and points from Buckley and Ciardha Maher finally broke the opposition resistance and gave Tipp their second title in three seasons.