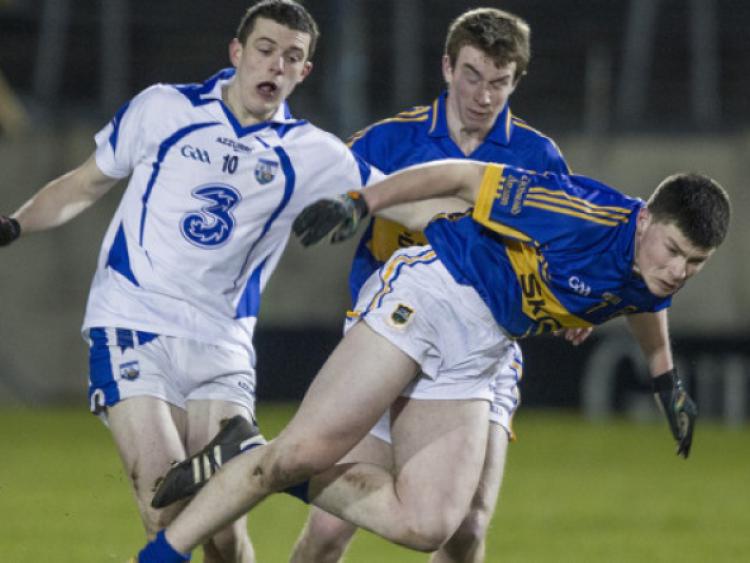 Backboned by members of the minor team that have won the All Ireland and two Munster titles in the past two years, Tipperary under 21 footballers proved too strong for Waterford in the first round of the Munster championship in Semple Stadium on Wednesday night.

Backboned by members of the minor team that have won the All Ireland and two Munster titles in the past two years, Tipperary under 21 footballers proved too strong for Waterford in the first round of the Munster championship in Semple Stadium on Wednesday night.

Hot favourites before the game, Tipperary justified the tag with an impressive 1-17 to 0-9 win.

They now meet Clare in the semi-final next Wednesday night.

A Michael Quinlivan goal set Tipp on their way and they were never really threated by the Deise men.

David Power, who guided the minors to their run of titles in 2011 and ‘12, is now in charge of the u-21s and was satisfied with the night’s work.

“It was a funny kind of game. We were expected to win which brings its own pressure., but we did not concede a goal and we scored 1-17. We are delighted to get off to a winning start, but it is going to be much tougher against Clare in the semi-final”, he said.

Looking ahead to the Clare game, he said that his charges have a good bit of work to do to improve . “We will get down to that. I am happy with where we are and hopeful that we can improve”, he added.

He was also hopeful that the injury situation would improve and that such as TJ Ryan, Ian Fahey and of course Philip Quirke will be ready for the semi-final. ”The big thing about the modern game is that you need strong squad to compete. I am happy that we are in a good position, and if we can beat Clare we will most likely face Cork in the Munster final and there again we have home advantage”, he said.

Philip Quirke made a big impact when he came on and probably would have started but for a colleges injury picked up playing for UCD. In the first half, Michael Quinlivan was a huge threat to Waterford and he finished the game with 1-3 from play and 1-5 in all. Liam McGrath was always busy and productive while Stephen O’Brien, Niall O’Sullivan, Dylan Fitzell and Seamus Kennedy were others to have influential games.

After a promising start, Waterford drifted out of the game. They relied heavily on Paul Whyte for scores, an excellent player but sadly ploughing a lone furrow though Gavin Nugent did offer some support. Ronan Sheehan, Ray O Ceallaigh, and Kieran Power were others to put in a decent shift.