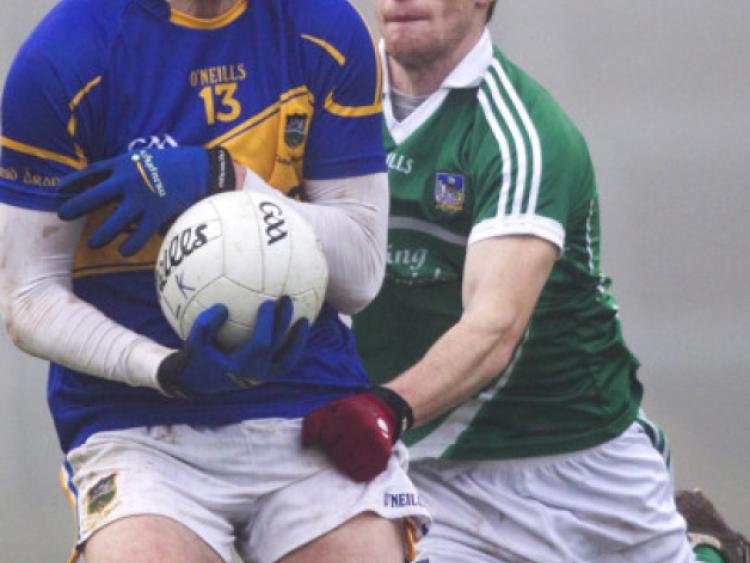 Limerick team that displayed little or no desire for the

Covered in fog, Semple Stadium hosted a one-sided encounter, with the home team playing an impressive and patient possession game, punishing Limerick with a quality attacking display during which they wasted very little in front of goal.

The gulf in class was evident from very early on as Tipperary kept possession with ease, moving the ball upfield with great efficiency with Limerick unable to cope with their precise passing and intelligent movement.

Tipperary were determined to get points on the board after the disappointment of leaving Armagh without something to show from their opening game the previous weekend. Tipp swept Limerick aside with a powerful display in the opening thirty five minutes on a day when the fog that descended onSemple Stadium was so dense that the public address had to announce the score to the 513 paying patrons who could not read the scoreboard at the Killinan end.

position, a lead that was never under threat from a weak and insipid Limerick.

Limerick were wasteful, recording seven wides in that first half, four of them in the opening ten minutes when they enjoyed their best spell.

Tipperary were in control from very early on, picking off the points to race clear of a very poor Limerick team.

By the end of this one-sided contest Tipp had the luxury of looking at a scoreboard on which scores arrived from their goalkeeper Evan Comerford to corner forward Ian Fahey, with a player on every line of the pitch scoring.

This was in stark contrast to Limerick, whose goalie made numerous attempts from inside the Tipp half from frees and he came closest to scoring his side’s only point of the first half when his free in the thirty fifth minute hit the bar.

It wasn’t the closest Limerick came to scoring during that abysmal first half as their midfielder Gearoid Hegarty rounded Stephen O’Brien to get in a shot at goal, only to see it travel along the ground past Evan Comerford but inches wide of the post.

Limerick had to wait until the 44th minute for their first score of the game, a point from Ian Corbett and after the excellent Peter Acheson, with his second point, cancelled that out Limerick were awarded a penalty in the 48th minute.

A well-taken kick from the spot by Seanie Buckley beat Evan Comerford to his right but any hopes Limerick had of mounting an unlikely comeback were blown away when Tipperary charged upfield from the kick off with Ian Fahey blasting a fierce drive to the net to finish off a fantastic move and from that point onwards the game as a contest was well and truly over, as both teams began to empty their benches.

As a spectacle this contest offered little other than the admirable manner in which Tipperary achieved what they set out to do, secure the two points in their opening home fixture.

They played their best football in the first half, with the outstanding Peter Acheson orchestrating from the centre back position. The Moyle Rovers man regularly pushed forward into an advanced role, making himself available for a pass from his forward colleagues who found themselves retreating and picking out Acheson so that he could keep possession and start the next attack.

They were four up after twelve miinutes and had registered no wides compared to four from Limerick, with points coming from two Moyle Rovers men - corner back Alan Campbell and Peter Acheson - one from full forward Michael Quinlivan and Conor Sweeney, who managed to score five on the day.

Sweeney added two frees in that first half but the pick of the scores in that period of dominance for Tipperary was a brace from Brian Fox after good work by George Hannigan and Donagh Leahy.It was that business like first half team effort that set the foundations for this comfortable victory