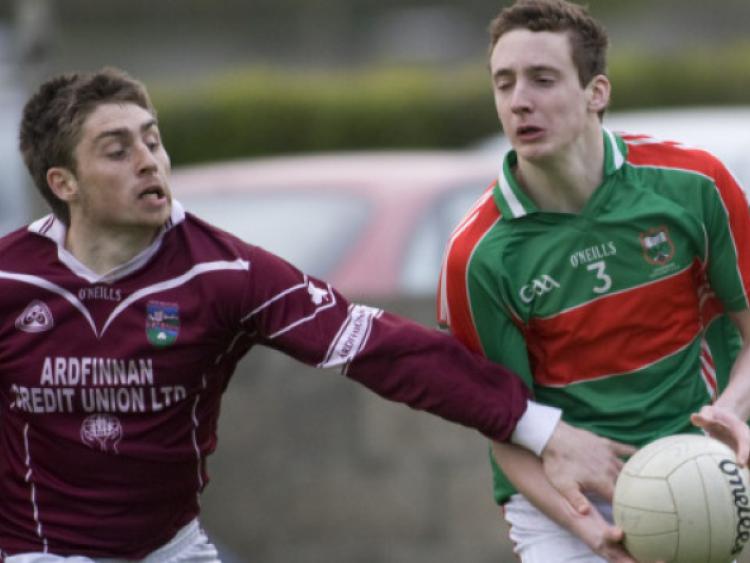 Ardfinnan won the County Tipperary u-21 FC ‘A’ title for the first time in twenty years with victory over holders Loughmore-Castleiney, 0-11 to 1-5, at Boherlahan.

Ardfinnan won the County Tipperary u-21 FC ‘A’ title for the first time in twenty years with victory over holders Loughmore-Castleiney, 0-11 to 1-5, at Boherlahan.

The euphoria in the Ardfinnan camp after the game reflected how much the title meant to the club.

To their followers, all sixteen who played were heroes, but Oisin Flynn, Darren Bray, Daniel O’Regan, Philip Murphy, Billy Hewitt, Tom Kirwan and Michael O’Sullivan stood out head and shoulders above the others.

This crop of young players have the potential to bring back the glory days for Ardfinnan at senior level and their progresss will be followed with interest.

Daniel O’Regan opened the scoring with a point but Liam McGrath’s pointed free for Loughmore levelled by the 7th minute.

O’Regan and Gerry Cronin added further Ardfinnan points by the 16th minute. Loughmore’s great tradition in this grade ensured that they never go under easily. Liam McGrath pointed a free and in the 21st minute, John McGrath, a hugely influential figure for them in the period, set up Benny Harkin who took his goal with great aplomb to put them ahead.

Shane Fagan pointed a free for Ardfinnan who turned up the heat in the closing minutes of the half, shooting three points through Hewitt (2) and O’Regan to go two clear but in injury time Brian McGrath pointed for Loughmore to leave Ardfinnan ahead 0-7 to 1-3 at the interval.

Though Bill O’Connell levelled for Loughmore inside a minute of resuming, the second half was dominated by Ardfinnan. O’Regan’s fourth point of the day, restored their advantage but in a very competitive period, scores came slowly, with Ardfinnan shooting seven wides. Pointed frees by Billy Hewitt in the 43rd and 49th minutes had Ardfinnan pushing for home. Liam McGrath pointed a free in the 56th minute to signal an all-out drive by Loughmore for a winning goal. In a break, Gerry Cronin restored Ardfinnan’s three point lead but as the game drifted into injury time Benny Harkin had a blast for goal for Loughmore scrambled off the line, and seconds later, fullback Joe Hennessy’s piledriver skidded wide, leaving Ardfinnan relieved but delighted champions.