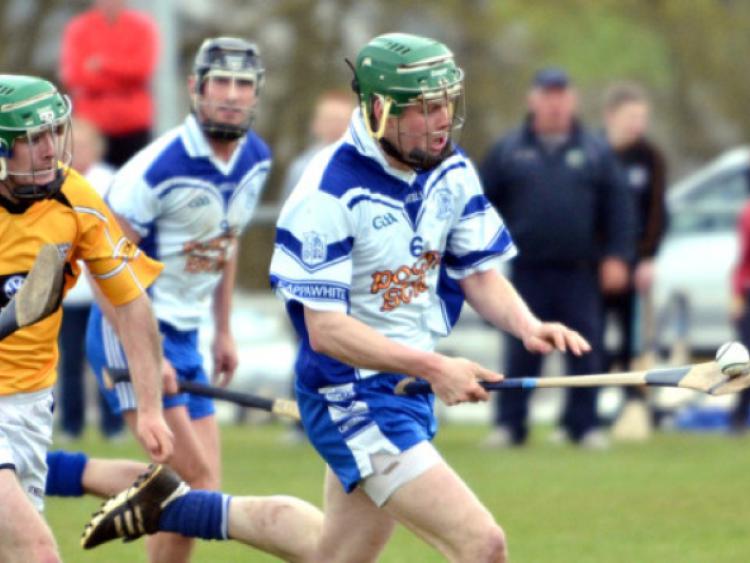 Kickhams struck late to beat Cappawhite by a point, 0-14 to 1-10, in the West SHC on Saturday, and confirm their semi-final slot

Kickhams struck late to beat Cappawhite by a point, 0-14 to 1-10, in the West SHC on Saturday, and confirm their semi-final slot

The contest only came to life in the last five minutes and a grandstand finish brought the small attendance to their feet as Cappawhite levelled with a wonder goal from Gerry O’Neill only to have the victory snatched by a fine individual effort from Paudie Slattery, Davy Butler doing the hard work earlier.

Kickhams, with six points now, play play Éire Óg,also on six points, in their final game of the league while Cappawhite just on two points have a crucial game against Cashel K.C who have garnered only point in the league so far where the winner takes all.

This game was played in the excelleently prepared pitch on a fine sunny evening, but conditions deteriorated towards the end. Kickhams were out of the blocks early with points from play by Davy Butler and a free by ace marksman Richard Horgan. Cappawhite replied with three points, two from scorer in chief Gerry O’Neill and another from Russell Quirke. However Alan Horgan pointed a sixty five to level the sides at the end of the first quarter.

Richard Horgan with points from play and a free had Kickhams ahead by two after eighteen minutes. However they did not raise a flag again in the half until the second minute of added time. Meanwhile Cappawhite struck a purple patch and fired over five unanswered points - Timmy Cranley, then Gerry O’Neill with three, one from a free and another from the excellent Tom Treacy. So in added time Cappawhite led 0-8 to 0-5 before Alan Horgan converted a sixty five metre free just before the short whistle to leave only two points between the sides.

Immediately on the resumption, Gerrry O’Neill converted a free. Pakie Farrell and Davy Butler pointed for the Kickhams to leave the minimum between the sides. After forty seven minutes Gerry O’Neill had Cappawhite’s second point of the half to put two between the sides again. Following two pointed frees from Richard Horgan, the sides were level with five minutes of normal time remaining. At this stage Cappawhite were well in contention but lacked the forward power to press home their advantage.

On the other hand the Kickhams forwards were giving the Cappawhite back sextet a torrid time and Davy Butler at midfield was using his pace and skill to good effect. Richard Horgan landed another two pointed frees and in normal time Kickhams led 0-12 to 0-10.

Davy Butler then increrased their lead to three and it seeemed as if the game was over. However people reckoned without the skill and courage of Gerry O’Neill. Three minutes into injury time Cappawhite were awarded a thirty metre free and O’Neill lashed the ball to the Kickhams net. The sides were now level. Following the puckout, Davy Butler won the ball around midfield and soloed right into the heart of the Cappawhite defence, he then placed Paudie Slattery for the winning point from a tight angle on the left wing. Kickhams were jubilant while Cappawhite must certainly rue their litany of unconverted chances.

Kickhams, short four regulars, were the more even side with a solid spine. Eoin Carew at full back, Alan Horgan at centre back, Davy Butler at midfield and Richard Horgan at full forward were all prominent. The Shanahan Brothers, Michael Heelan and Paul O’Dwyer all also hurled well. Up front Paudie Hayes, Pakie Farreell and Paudie Slattery did well.

Cappawhite once again over depended on Gerry O’Neill to get the scores. Only two other forwards raised a flag, one point each. Matthew Kennedy was also sorely missed in this department. Thomas Costelloe at centre back and Tom Treacy stood out in defense, Paddy Julian and Donagh Heffernaan fought valiantly at midfield. Up front,besides O’Neill, Russell Quirke and Timmy Cranley also had their moments.