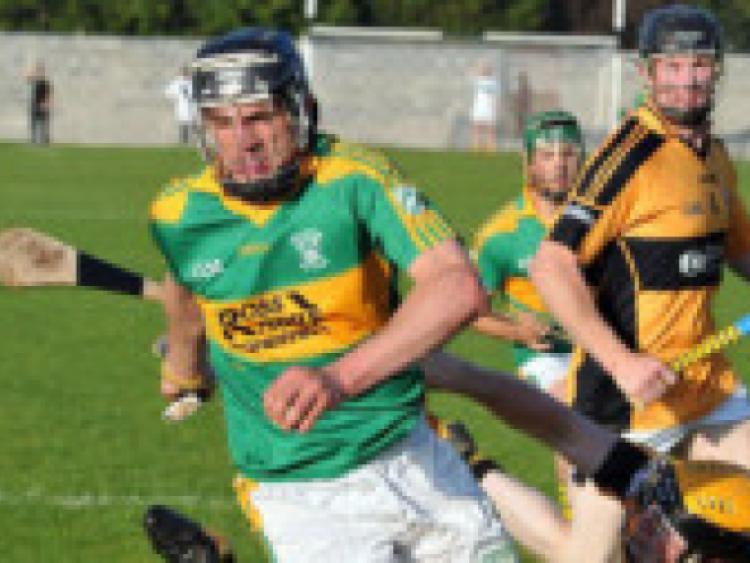 Tipperary will be attempting to retain the title which they won by defeating Clare in last year’s final.

The last meeting between the sides in the Munster Intermediate championship was in the Munster semi-final on June 24 2012 when Tipperary won by 3-18 to 2-16. Only the O Riain (New) Stand will be open for this game. Admission Prices are Adults - €10; Students / OAPs - €5 (with valid ID) and Under 16s free. Damian Fox of Clare will referee the game. Extra time will be played if the teams are level after 60 minutes.

The senior hurling relegation semi-finals took place last weekend. Moneygall’s 1-14 to 0-10 victory over Cashel King Cormacs sees them safe from relegation but leaves Cashel with just one more chance to avoid a drop to intermediate status. In the other semi-final Boherlahan Dualla drew with Golden Kilfeacle on a scoreline of 2-12 to 1-15. There was no extra time and the game will be replayed in New Inn on Friday July 26 at 7.30pm.

The final round 2 game in the Clean Ireland Recycling County senior hurling championship resulted in a 0-22 to 1-11 victory for Burgess over Cappawhite. Burgess will play Borris-Ileigh in Round 3 on Sunday August 4. There are 16 clubs remaining in the county senior hurling championship at this stage: Borris-Ileigh, Burgess, Carrick Swan, Clonoulty Rossmore, Drom and Inch, Eire Og Annacarty Donohill, Kildangan, Killenaule, Loughmore Castleiney, Moycarkey-Borris, Nenagh Eire Og, Roscrea, Silvermines, Templederry Kenyons, Toomevara, Upperchurch Drombane. Round 3 will see 4 teams eliminated. Round 4’s games will be between the 4 winners of round 3 and the losing divisional finalists with round 5 (quarter finals) involving the Round 4 winners and the Divisional winners.

The July Tipperary Clubs draw was held in the Trap Bar, Grangemockler on Friday night last. It was a good night for Mid Tipperary clubs as The Skoda Octavia or €15,000 was won by JK Brackens’ Margaret Tobin of Church St Templemore while the Skoda Fabia or €10,000 was won by Drom & Inch’s Eddie Buckley of Golden Grove, Drombane. The Acorn Life sponsored weekend for 2 at Dromoland Castle was won by Willie Byrne. Well done to all the prizewinners and thanks to the Grangemockler Ballyneale club and the Trap Bar for hosting the draw.

A new Tipperary GAA website will be launched by Tipperary County Board over the summer period. The new website is being built by EBow, developers of the national GAA.ie website. The IT Committee under the chairmanship of Edward Kinane of Drom and Inch is leading the website development project. Edward and his committee have put a lot of effort into designing the new website. Some of the many improvements on the new website are – easier navigation to most frequently used pages, better presentation of results, new youthzone, easier online purchase of merchandise and online version of Tipperary clubs and information directory. With an ever increasing number of hits on the site, it also presents an opportunity for companies and individuals to place advertisements on the website. For further information on advertising opportunities, please email pro.tipperary@gaa.ie. More details on the new website will be provided closer to the launch.

Fergie Hanna, who is completing the history of the New York GAA for their centenary in 2014, is looking for information on a football team from Tipperary who visited the U.S. in July 1905. If anybody has any information about this team, please contact County PRO, Ger Ryan on 086 8149146 or by email at pro.tipperary@gaa.ie. The team was referred to in the New York Irish press as the Galtees, but this might just have been a reference to the county where the team hailed from rather than the actual club itself. A photograph was published in the American Advocate on July 8 1905, and this photo was credited to P.J. Condon of Cahir. The names of the players in the photo were (in alphabetical order) – James Coffey, Pat Condon, P. Davin, John Fogarty, P. Heffernan, James Hickey, Jas Keating, Jas Kiely, P. Kiely, John Morrissey (captain), P. Myers, P. O’Donnell, T. O’Mara, M. Prendergast, John Ryan, P. Ryan. On June 24 this piece appeared in the columns of the Advocate – “The best football players of County Tipperary under the new and appropriate name of the Galtee Football club will be here within a week, and will give exhibitions of their prowess throughout the United States. Their first appearance in America will be at the Tipperary Men’s Picnic at Celtic Park on July 16 when the new arrivals will play the Tipperary men of New York. After this they will travel West and South and will play local teams in Philadelphia, Boston, Chicago, St. Louis, Minneapolis, Denver and other places where Gaelic football teams are in vogue. Their appearance at Celtic Park will create no small interest among the Irish sporting element everywhere in this country, and their appearance at Celtic Park on Sunday July 16 will attract the lovers of Gaelic football from the five boroughs and some of the neighbouring States to witness their skill in a game with the sturdy sons of their native county in this city.”

Information concerning all areas in the GAA will appear in this section in the future. If you wish to include any item of interest in future articles, please contact the County Public Relations Officer Ger Ryan at pro.tipperary@gaa.ie on or before 3pm on Monday. Visit the Tipperary GAA web site at www.tipperary.gaa.ie keep up to date with all the latest news in Tipperary GAA circles.