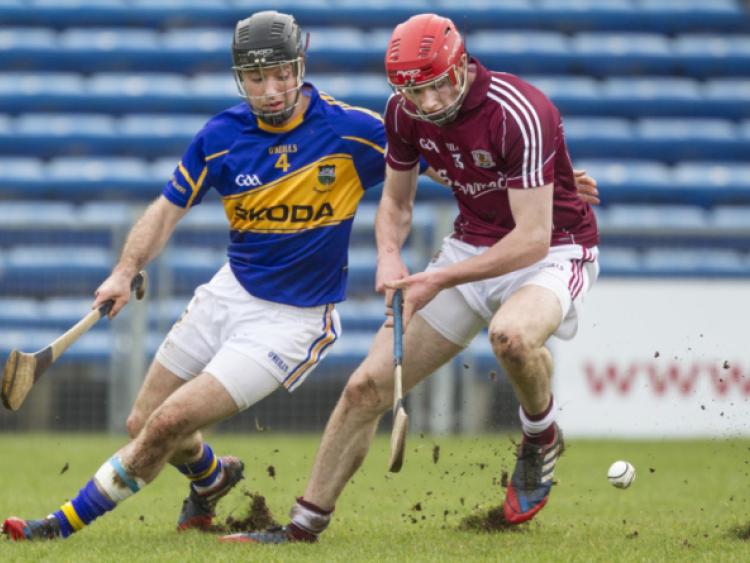 A weekend of double-delight for Tipperary hurling: the Allianz league is back on track after a welcome boost against Galway; and Thurles CBS celebrate a famous Harty Cup win, the school’s eighth.

A weekend of double-delight for Tipperary hurling: the Allianz league is back on track after a welcome boost against Galway; and Thurles CBS celebrate a famous Harty Cup win, the school’s eighth.

After all the concern over the league defeat to Dublin the previous week there was much-needed relief at the Stadium on Sunday. Galway’s record in league outings at Thurles is dismal – just two wins out of eighteen visits prior to Sunday. The pattern continues.

A fighting finish saw the home team prevail in testing conditions. Two third-quarter goals were the critical items that gave us the cushion to withstand a late push by the wind-backed visitors.

A typical mid-February league outing, I’d suggest - not pretty but dogged and error-strewn in challenging conditions. Encouragingly from a Tipp perspective there was more spirit on view this time and that, plus the goal breaks, was enough to get us over the line.

The significance of the goals can’t be overstated. Our interval lead of three was slim and likely to be inadequate against a rising wind. Happily then we got an instant break on resuming with John McGrath kicking on to ‘Bubbles’ and in a millisecond the ball was nestling in the onion bag. Are there faster hands than O’Dwyer’s in the game at present?

In the follow-up Callanan caught a great one and the resultant free further stretched the lead. Then, before Galway could respond, we had the second goal, a lovely deft lift and flick by the full forward.

Suddenly the interval gap of three had widened to ten and by now the game had taken on an entirely different complexion.

Yet by game’s end we were scrambling. Some desperate defending - and wayward shooting by Galway - kept the rally at bay. Gleeson’s heroics too were critical as a series of stops denied Galway the boost of a major lodgement. Late points on the counter by Brendan Maher and Conor Kenny were essential also. In the end there was collective relief in the Tipp camp after a precious brace of points was secured.

Sufficient unto the day, is probably the best way to sum up this outcome. It certainly wasn’t a dominant performance and would hardly have coped with any other side in the group apart from variable Galway. The goals were individual items rather than the result of sustained pressure and the visitors can certainly feel that they were luckless at the other end.

Nonetheless we’ll willingly embrace the positives from this outing. There was an experimental element to the line-out, in part enforced by injury, and the wannabes overall did well. Both Ronan Maher and Michael Breen can feel reasonably happy with their inputs at half back in what is a learning curve for both players at this level.

John McGrath too can look back on his debut with pleasure. His two points coupled with his involvement in both goals represented a decent day’s work so we’re likely to see more of him in future games. Denis Maher too was busy throughout before that freak injury consigned him to a growing casualty list. Jason Forde too had individual items of note including three valuable points, none more precious than that in the second half when we were under the cosh.

Darren Gleeson, Paudie Maher and Kieran Bergin probably vied for the individual, stand-out award. The goalie needed to be alert throughout with a number of tricky balls to cope with while Maher was outstanding at centre and Bergin was excellent especially in the opening half when he hit three points.

I’d give a lot of credit to the defence overall, especially in the last quarter when the pressure was relentless as we faded at midfield and half forward. Cathal Barrett looked lively, Curran was as stubborn as ever, though tested late in the game by the arrival of Joseph Cooney, and Conor O’Brien included one crucial late fetch among his best moments. ‘Bubbles’ does the eye-catching deeds - but would need to be careful on other actions. Callanan had the individual items of highlight too – a major improvement on the Dublin game though still shy of his best from last year. Gearoid Ryan’s lack of form is a worry.

The jury remains deadlocked on the Brendan Maher experiment at half forward. Both sides of the debate could pick supporting evidence from Sunday. I remain sceptical. On the substitute front it was exciting to see John Meagher’s entry and productive involvement. Conor Kenny too did well – he seems to have all the skills and physique though at times you’d like to see more drive in his play.

Overall then it was a case of job done, the points in the bag and all eyes now turn to Sunday week and a very tricky visit to Ennis against a Clare outfit desperately seeking points.

There was nothing desperate about Thurles CBS at well-marshalled Mallow on Saturday last. A gripping game and a rousing encore at the climax saw the school defy the odds to carry home another precious Harty honour, their eighth in total and their first since 2009.

We’ve probably seen classier CBS sides - who failed to win Hartys - but this one certainly has the winning knack. A glance at their recent results tells a tale: one point winners over the North Monastery Gaelscoil in the quarter-final and the same margin v. Castletroy CC in the semi. It takes real grit and gumption to get home in photo-finishes and these CBS lads have that hard-edged resilience.

They needed it all on Saturday because in both halves things looked like drifting Lee-wards. An early goal for Rochestown, excellent executed by Ciaran Cormack (son of John from Loughmore, ex-Tipp underage player and All Ireland senior medalist in 1989) saw the Cork school take the early initiative.

However, a stirring second quarter from CBS, highlighted by goals from Galmoy’s Kevin Duggan and Sarsfields’ Billy McCarthy, put the Tipp school four-up at the interval. Once more on the turn-over Rochestown found the gears: four unanswered points had them level going into the last quarter. They went one-up before Billy McCarthy hit the point of the game from midfield to level matters. The encore was Tipperary’s: another point from McCarthy and follow-ups from Kevin Duggan and substitute Michael Connors from Drom/Inch sealed the deal.

It was a memorable one for CBS. Billy McCarthy was the headline grabber but there was a collective will in this effort which was outstanding, from goalie William Tierney (Sarsfields) who made one crucial block, to two-point corner forward, Robbie Long (Drom/Inch). They’ve taken their place in history because Harty medals are precious commodities.

There’s a nice town-country balance in this side with four from Sarsfields on the starting blocks and the rest from hinterland parishes. Clonoulty’s Ronan Heffernan, as highlighted previously in this column, was denied participation but his brother Enda upheld the family honour at full back. Their cousin, Niall Heffernan (Moycarkey), son of ‘Shiner’ of Clonoulty fame – man of the match in the 1997 county final – was free-taker and took one for the team late in the hour with a professional foul halting a Cork attack and earning a second yellow.

Clonoulty were well represented on the team with corner back, Dillon Quirke, earning his medal too. He’s the son of Dan Quirke, who must be weary of being recalled as the three-goal hero who scuppered Offaly in the 1989 All Ireland U21 final.

There were other notable connections on the side also. The team was captained by Ronan Teehan, Gortnahoe; remember John, wing back on the 1996 Tipperary All Ireland winning minor side. Corner forward, Jack Butler, hails from Upperchurch but his dad, Johnny, is an ex-Kickham player and present referee.

The team management deserves mention too for an excellently-drilled side. Clonoulty’s John Devane is a past pupil of the school and a versatile (to his cost) Tipperary senior panelist for several years. With him was Borrisoleigh’s Martin Maher, another ex-Tipperary player at several levels and Niall Cahill, a former Kilkenny U21 player from the Emeralds club in Urlingford. It takes method and motivation to bring a team to this level. Well done to all.