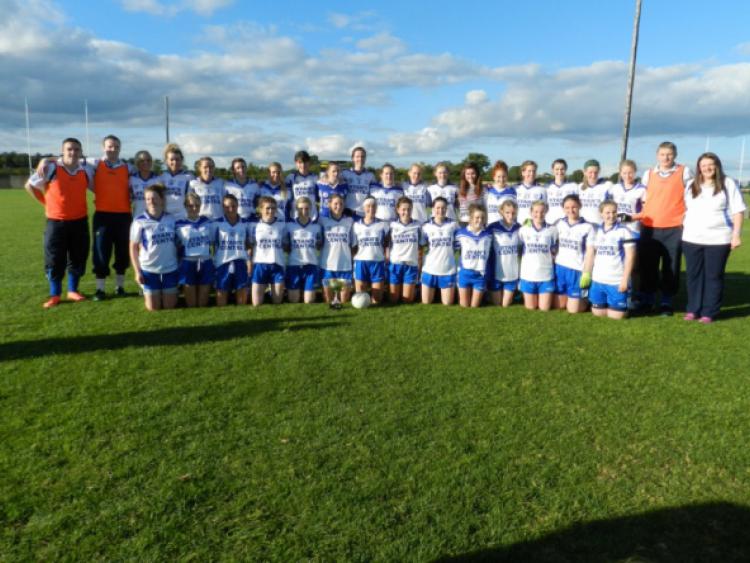 Conditions were excellent with a beautiful September summer evening and an immaculate field thanks to the Moyle Rovers Club and Pat O’Connor. Cappawhite succeeded in winning their third County Final in a row thanks to a hat trick of goals from Sinéad Buckley.

The game began at a fast pace with Mairead Morrissey scoring a point from Brian Borus straight from the throw-in followed by a pointed free a minute later.

Sheelagh Carew, Cappawhite, started their scoring in the fourth minute with a point but they did not register another point until the twelfth minute by which time Brian Borus has managed to score five points.

In the fourteenth minute Patricia Hickey added another point from play to stretch the lead for Brian Borus to 0-6 to 0-2 at the end of the first quarter.

Cappawhite gradually settled into the game with two quick points in the 16th and 18th minutes before taking the lead in the 24th minute as Sinéad Buckley scored a goal.

Neither team scored again before the half time whistle blew with Cappawhite in front by a point - Cappawhite 1-4 Brian Borus 0-6.

Supporters of both teams expected an exciting second half but alas this was not to be.

Cappawhite raced in to a three point lead soon after the second half began and this was followed by another goal from Sinéad Buckley in the eighth minute to stretch Cappawhite’s lead to five points.

Brian Borus had no reply to this and in the 45th minute Buckley netted again.

Brian Borus tried valiantly to engineer a comeback but could make no headway against the resolute Cappawhite back line.

Cappawhite added another three points in the final quarter to run out winners on a full-time score of Cappawhite 3-9 Brian Borus 0-7.

Cappawhite will look forward to meeting the Waterford Club representatives on October 5, either Ballymac or Comeragh Rangers.