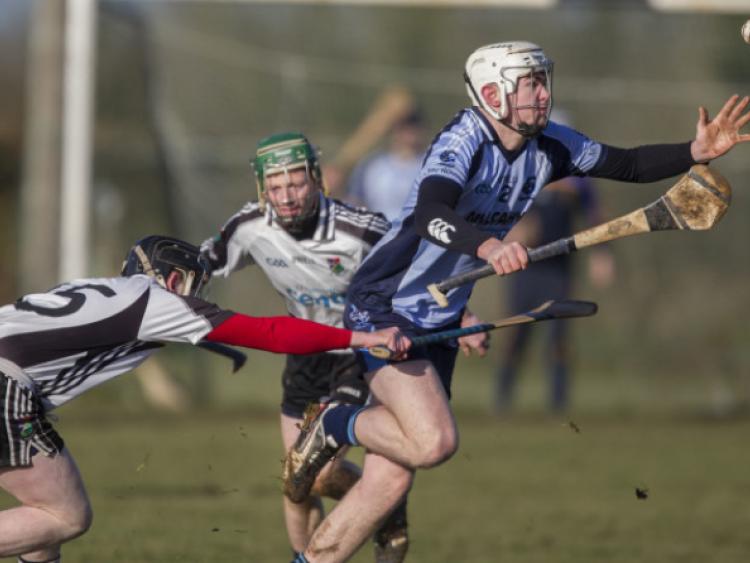 A storming first half display by Moyle Rovers helped them to a comfortable enough win in the County U/21 B Hurling Championship semi-final against JK Brackens on Sunday last at Boherlahan.

A storming first half display by Moyle Rovers helped them to a comfortable enough win in the County U/21 B Hurling Championship semi-final against JK Brackens on Sunday last at Boherlahan.

Making full use of the strong wind at their backs for the opening half, the South champions led by 1-10 to 0-2 at the interval. Try as they did JK Brackens never got nearer than a four points deficit in the second period. A late second goal by substitute Craig Condon put the seal on the win for Moyle Rovers who now go on to face West combination side Cappawhite/ Sean Treacy’s in Sunday’s county final.

Starting with no less than eight of the side (nine by the finish) who captured a first-ever county minor ‘A’ title for the Monroe club in September last, Moyle Rovers were up for this one right from the start. Two early points from Dara Ryan (free) and Morgan Irwin settled them well. Eight minutes in they got a great boost when a clearance from impressive centre-back Ross Mulcahy was collected by Stephen Quirke and a well-timed lay-off sent Morgan Irwin through for a great goal.

Within 10 minutes of the start Rovers were 1-4 to 0-0 clear with further points from David Roberts and Stephen Quirke (free).

A slow-starting Templemore side, without a competitive game for five weeks, eventually got on the scoreboard with a Brian Kennedy free 13 minutes in. They would add only one more point to their first half tally with Dylan Moloney’s free a minute before the break.

With Rovers’ midfield of Shane Lonergan and particularly Brian Gleeson growing into the game, and all the forward line showing, Rovers had the next five points without reply. Frees by Dara Ryan and Stephen Quirke were followed by an excellent point from Ross Mulcahy coming through the centre, helped by an interchange with Cathal Quigley.

A pair of points by dual county minor Stephen Quirke from a 65 and another from play (after Dara Ryan’s excellent blockdown) extended the South side’s advantage to 1-9 to 0-1 after 24 minutes.

Brackens were living on scraps and were it not for some great efforts from the likes of James Bergin and Alan O’Riordan in the half-back line would have been in greater trouble.

Moloney’s 30th minute free for Brackens was cancelled out almost immediately by a flowing move involving Morgan Irwin and Tadgh Fitzgerald to set up Dara Ryan for the last score of the first half which ended 1-10 to 0-2 for Moyle Rovers.

Backs to the wall now for Templemore as they moved Colin O’Riordan briefly to full-foward for the start of the second period, having got little change from Ross Mulcahy in the opening 30 minutes.

Three points in the first seven minutes after the re-start - a free from Dylan Moloney and excellent points from Dean McEnroe and Alan O’Riordan put some life into the Mid champions. But at eight points down still, they would need a green flag or two it appeared at this juncture.

An acute-angled point from Rovers corner-forward Tadgh Fitzgerald when cutting in from the wing on 46 minutes was Rovers first of the second half.

Brackens then enjoyed their best period of the game with Dean McEnroe and Colin O’Riordan (now back out the field) getting on top. McEnroe had a fine point from midfield before a worrying trend set in for Rovers. A concession of frees were punished four times in as many minutes by  Colin O’Riordan and with seven minutes to go just four points separated the sides.

Rovers now needed someone to grab a hold of the game quickly and the next passage of play was crucial to the result. Epitomising an industry and determination evident in his side all through, Rovers’ midfielder Brian Gleeson chased down his opponent in possession, robbed him before playing an excellent long pass into Craig Condon who, with some work still to do, blasted to the net to ensure Moyle Rovers’ place in the county final. Mundane work morphed into a matchwinning move in a moment.

Gleeson was also involved in the last score of the game when finding Dara Ryan with a long delivery which ended in another late substitute Ciaran Luttrell pointing for the final score of 2-12 to 0-10.

For Rovers all the aforementioned did great work but the backs too did what was asked of them conceding just three points from play over the hour. The half-back line of Kevin O’Donnell, Ross Mulcahy and Shane Luttrell were solid and behind them Paddy Morrissey, Brian Norris and Aidan Butler held their own.

PS: The condition of the pitch was very poor and made good hurling difficult. An inter-county game the previous day and a club training session on Sunday morning didn’t help.