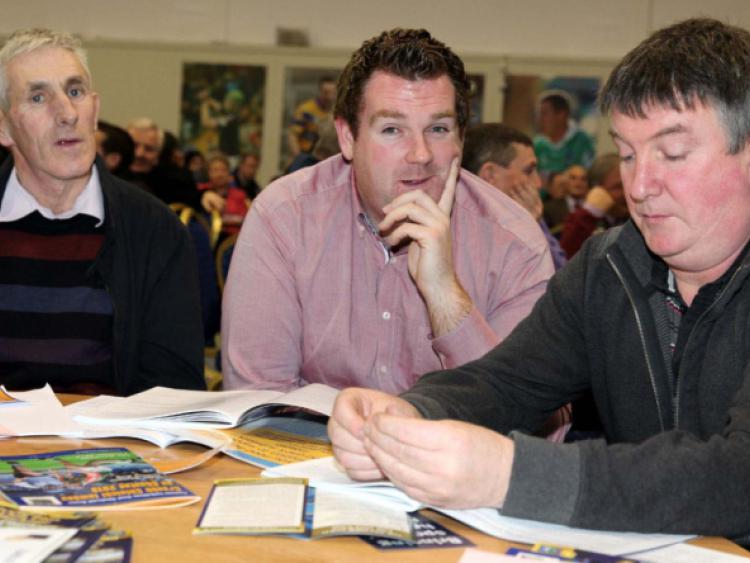 The chairman said that while their visit to New York was a very successful one they were surprised to find the GPA people there also.

“It certainly provoked comment among members of our supporters in New York who were unsure as to whom they should support,” he said.

He added: “Our fundraiser was geared towards funding our centre of excellence in Dr Morris Park and improving facilities for our county players. In the present economic climate we found it necessary to go abroad to fundraise, something we have never done before and it was not helpful to our cause that an operation run by a full-time and professional people had been there in advance.

“Further events of this kind have been held in New York since then and it begs the question: how are we in our counties expected to fund inter-county teams and improve facilities for county players if we have to compete with another tier of fundraising carrying the GAA name either at home or abroad?” he said.

The chairman called on the Croke Park authorities to examine this situation to ensure that there is no conflict between the volunteer-led fundrasising by counties and those organised by the GPA.

“The GPA have the capacity to do great things for players and ventures like job creation, education, player welfare, mental health issues, confidential counselling and so on are to be lauded and appreciated by the players and association in general.

“However the funding of these areas must be jointly-controlled by Croke Park thus ensuring that the benefits are inclusive and transparent and most importantly do not cut across the volunteer-led fundraising by counties which supports training facilities and support services for inter-county players,” he added.

The Kilsheelan-Kilcash man, who was returned unopposed for a third year in office, said that the development of Dr Morris Park (Thurles) as a centre of excellence continues. New dug-outs have been provided on pitches two and three; road improvements have been completed around the perimeter of the pitches and the first phase of the hurling wall is nearing completion and will be open in the New Year.

He added: “It will take at least 1.2 million euro to complete the project, which, if funds were available, would be completed to coincide with our five-year plan.

“Once again, I put it to Tipperary supporters worldwide, if you want to contribute to that famous brand Tipperary, that is epitomised by our GAA teams, there is no more practical or beneficial way to do so than by putting sponsorship and your name tot his project.”

He thanked Lisheen Mines, major sponsors of the hurling wall project, and John Ryan, Holycross ”who is our unofficial project manager in Dr Morris Park for his splendid example of volunteerism in overseeing all aspects of the Dr Morris Park project”.

Describing 2013 as a disappointing year on the inter-county front the chairman however singled out the intermediate hurlers for special praise on their victories in the Munster and All-Ireland finals, but blasted traditionally strong hurling counties for their failure to participate in the intermediate championship.

“Munster counties are the strong supporters of this grade. In Leinster, Kilkenny are the only standard-bearer and one has to ask where are the other traditionally strong hurling counties in Leinster like Offaly, Wexford and in particular Dublin where there has been a huge investment in hurling promotion that they cannot put a second team on the field. We really appreciate winning this championship and the opportunity it gives to players to participate at this level. However the lack of participation by some hurling counties diminishes the status of the competition and does nothing for hurling development in these counties,” he said.

The chairman welcomed the progress made in addressing the board’s financial concerns arising from a deficit of 246,000 euro last in income over expenditure.

“This was a major concern and had to be addressed urgently he said. Fundraising plans and cost-cutting measures were drawn up, and with a united approach and a firm resolve, the matter was addressed and worked on throughout the year. He thanked all who had helped put the board’s finances back on track,” County Board chairman Sean Nugent said.