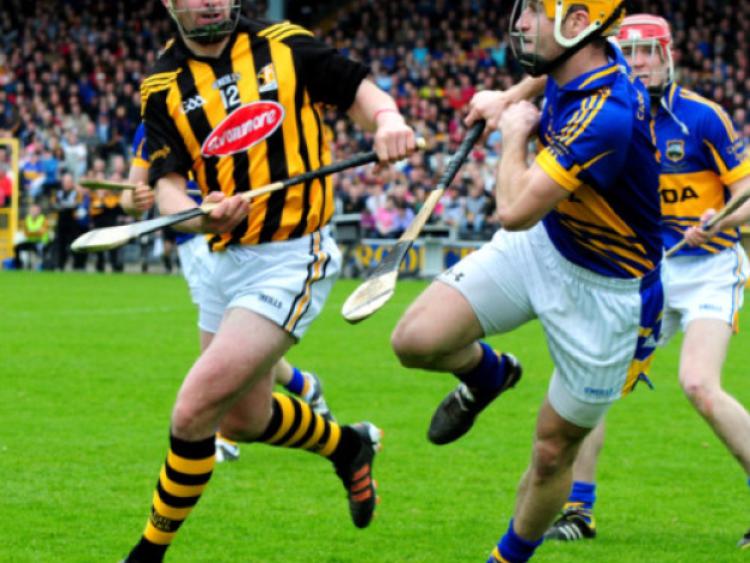 Kilkenny, deservedly, claimed a 16th National League title at the expense of Eamon O’Shea’s Tipperary at a heaving Nowlan Park, Kilkenny on Sunday afternoon. Tipperary recovered well from the concession of two early goals to draw level with twenty minutes to play, but Kilkenny looked the sharper and more composed outfit throughout.

This was not a game, as Enda McEvoy captured so beautifully in his programme notes, one for the vegetarians. This was a proper game - tough, intense, fast and edgy. The 21,447-strong crowd contributed to a terrific atmosphere and when the final whistle blew the Cats roared and Michael Fennelly leapt about punching the air.

Unfortunately, the game was punctuated by a handful of distasteful challenges which saw eight players cautioned and two sent off by Westmeath referee Barry Kelly, who was roundly booed by the Kilkenny faithful on several occasions.

Following an off-the-ball incident in the 46th minute Kilkenny’s JJ Delaney and Tipperary’s Lar Corbett were shown straight red cards. Subsequent suspensions will see both players miss the opening round of the hurling championship on June 9th. To add insult to injury the misfortunate Corbett also finds himself nursing fractured ribs this week following this latest bruising encounter with the Cats.

Tipperary supporters left Nowlan Park on Sunday smarting from another defeat suffered at the hands of Kilkenny, but certainly happier than the 2012 All-Ireland semi-final which saw the Premier lose the second half of that encounter by an outrageous nineteen points.

Thanks in no small part to the excellence of Michael Fennelly Kilkenny made a whirlwind start on Sunday and raced into a 1-2 to no-score lead. Indeed, when the Ballyhale man cracked home his goal in the third minute all over Nowlan Park Tipperary heads were placed in hands. The response, however, of the Tipperary players was magnificent and significant. Indeed, Tipperary won the remainder of the game 0-20 to 1-15.

Once more the Tipperary players found themselves on the brink of humiliation, but thanks to some backs-to-the-wall bravery, and the leadership of men like Brendan Maher, the Premier recovered to exhibit the proud values we associate with the blue and gold jersey.

And, although the National League carries all the significance of a political opinion poll come September Tipperary’s performance smacked of a side which has ambition, is united and of one that is, thankfully, being managed in a progressive manner.

Besides the outstanding Brendan Maher Michael Cahill was terrific in the full-back line. Conor O’Mahony appeared to enjoy his outing at right wing-back, as did Kieran Bergin on the left while Pádraic Maher shook off a sluggish start to emerge as a real force at centre-back. Noel McGrath was superb around the middle of the field while for Kilkenny Michael Rice was this reporter’s candidate the Kilkenny for man of the match. Besides the Carrickshock man Paul Murphy, Kieran Joyce, Lester Ryan and Michael Fennelly all enjoyed fine outings for the home side.

Although Tipperary’s performance on Sunday was certainly encouraging in terms of attitude and application the Premier’s attacking play disappointed. Despite playing with the wind in the opening half too many of Tipperary’s deliveries forward were of the long-and-high variety as opposed to the short-and-low which had defined the attacks of Eamon O’Shea’s fast-developing side thus far.

Prior to Sunday Tipperary had scored fourteen league goals, but at Nowlan Park only managed to create a single goal-scoring opportunity - Patrick Maher spurned a gilt-edged chance in the 29th minute when hesitation on the part of JJ Delaney allowed the Lorrha the room to swing a cat if he chose to do so. The Bonnar wasn’t the only forward to struggle. Indeed, the Tipperary starting forwards (in comparison to Kilkenny’s 2-6) managed just 0-5 from play. And, with Noel McGrath (0-3) operating as a third midfielder the paucity of the return from the Tipperary attack was notable. Ultimately, Tipperary substituted five of their starting forwards. Sadly, John O’Brien was the only Tipperary forward to score from play during the final half hour.

That said you would have every confidence in the players and the management team to re-assemble the pieces as briskly as possible and get on with the job of preparing to face Limerick at Páirc na nGael on Sunday, June 9th.

Sunday marked the ten-year anniversary of the 2003 National League final to the day. A decade ago Kilkenny beat Tipperary for the first time in a big match for nearly forty years. Brian Cody’s men, however, have turned that prevailing pattern on its head in recent years. And, it looked as if Tipperary were in for another salutary lesson at Nowlan Park when Kilkenny raced into a 1-2 to no-score lead inside the opening three minutes.

A Lester Ryan point inside nine seconds, an Eoin Larking free and then a thunderous Michael Fennelly goal when the Ballyhale man raced through the heart of the Tipperary defence in the third minute had the home crowd jumping out of their seats with glee.

Tipp responded like men however and out-scored Kilkenny 0-5 to 0-1 during the ensuing eighteen minutes of play. An Eoin Kelly free settled Tipp before Brendan Maher intercepted a Kilkenny clearance in the sixth minute and drove over a magnificent left-handed effort.

Michael Fennelly responded within two minutes for Kilkenny, but an absolute laser beam of a puck-out from Darren Gleeson picked out Brendan Maher seconds later and the Borris-Ileigh man landed his second point of the afternoon from distance.

Lar Corbett set up Noel McGrath for a smasher off his right in the 13th minute while Séamus Callanan smacked over a long-range free to leave just a point between them (0-5 to 1-3) and punctuate eight minutes of scoreless play in the 21st.

Sadly, Tipperary failed to defend the resultant puck-out in an adequate manner and Michael Fennelly, now positioned at full-forward, gathered possession and beat Darren Gleeson at his near post with a left-handed shot - 2-3 to 0-5.

Tipperary responded however. A Patrick Maher hook on Paul Murphy presented Brendan Maher with an opportunity to land his third point from play before an enterprising run from Kieran Bergin created the room for Eoin Kelly to leave two points between the sides in the 27th minute - 0-7 to 2-3.

Two minutes later Patrick Maher fluffed a gild-edged goal chance after Séamus Callanan had cleverly batted the ball down to the Lorrha man.

A Michael Fennelly point, following some excellent Michael Rice play, left three points between them (0-7 to 2-4) before an Eoin Kelly free and a tricky ’65 in the 32nd minute left the minimum in it. Seconds later Tipperary found themselves back on terms when Noel McGrath blocked down Kieran Joyce, gathered possession and swept over the point of the game.

A Colin Fennelly effort edged Kilkenny back into the lead, but Tipp responded almost immediately when Darren Gleeson converted a long-range free in the 35th minute.

Kilkenny closed out the half in impressive fashion however with points from Lester Ryan and Michael Fennelly to hand their side a 2-7 to 0-11 interval lead.

Eighteen minutes elapsed before Tipperary re-emerged for the second half. Indeed, a slow clap from the Kilkenny support prompted referee Barry Kelly to go looking for the Tipperary players who were then roundly booed when they emerged from their dressing room.

An Eoin Larkin ’65 opened a three-point gap between the sides before Eoin Kelly responded from a placed ball for Tipperary. Once more Kilkenny extended their lead to three thanks to an long-range effort from Kieran Joyce, but Tipperary’s play was much more measured now with Noel McGrath setting up Shane Bourke for a fine score before Conor O’Brien dispossessed Michael Fennelly and Noel McGrath fired over a super effort to leave just a single point between them - 0-14 to 2-9.

With Tipperary growing in confidence Kilkenny needed a score and Eoin Larkin found it when converting a very tricky free in the 43rd minute.

Three minutes later JJ Delaney and Lar Corbett were dismissed for an off-the-ball incident - referee Barry Kelly consulted with both of his umpires before making his decision.

Two minutes later a heavy challenge by Michael Fennelly on Brendan Maher presented Séamus Callanan with an opportunity to leave just one between them before Tipperary levelled it up with twenty minutes to play - Shane McGrath, Conor O’Mahony and Noel McGrath moved the ball smartly before Brendan Maher drove over his fourth point from play in the 50th minute - 0-16 to 2-10.

Tipperary now enjoyed a great opportunity to test the nerve of the Kilkenny men. If Tipperary had taken the lead at this juncture anything was possible, but Brian Cody’s men responded positively to the challenge with three points in four minutes (Richie Hogan, Eoin Larkin & Cillian Buckley) to lead 0-16 to 2-13 by the 57th minute.

Once more Tipperary found themselves cut adrift. Jason Forde set up John O’Brien for a left-handed point in the 58th minute, but Kilkenny hit back two minutes later thanks to Eoin Larkin (free).

In the 62nd minute Conor O’Mahony moved the ball calmly to the unmarked Pádraic Maher who belted over a great point into the wind, but Tipp struggled to put points back-to-back and Kilkenny responded with an Eoin Larkin free to maintain that vital three-point differential.

The tit-for-tat nature of this encounter persisted with Pa Bourke (free) and Lester Ryan trading efforts to leave three between them (0-19 to 2-16) before a second Pa Bourke free moved Tipperary to within two points in the 68th minute.

Tipperary almost shipped a third goal in the 69th, but Darren Gleeson made a fine save at his near post to deny the raiding Richie Hogan.

Trailing by two points Tipperary were still in with a chance of sneaking an unlikely win, but a Michael Rice point in the 71st minute presented Kilkenny with a vital three-point buffer.