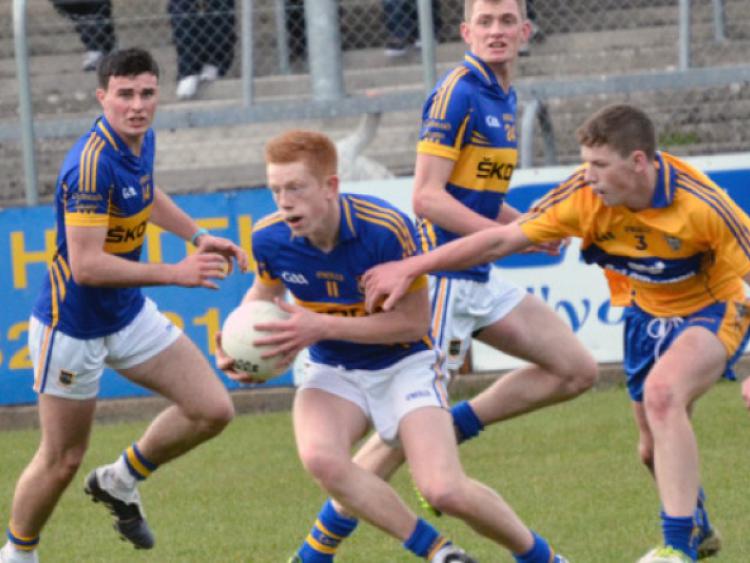 Tipperary will now prepare to face the winner of the Cork-Kerry quarter-final replay on May 15th in a provincial semi-final which is sure to capture the imagination of football supporters in the Premier County.

The pedigree of Tipperary underage football teams is now well established with the Premier undefeated in their last seven games in the Munster minor football championship.

It goes without saying that Tipperary are now chasing an unprecedented three in-a-row of provincial titles.

Meanwhile Clare have not claimed a minor provincial title since 1953 and going by this display it may be some time before the Banner add to their tally.

That said Tipperary could earn a significant dividend by playing the ball at the very earliest opportunity into these guys.

Tynan, for example, looked an absolute class act, but was starved of possession. Indeed, Tynan managed 1-2 from just a handful of balls.

Last year Tipperary beat Kerry twice and Cork once in a terrific provincial campaign, but if the Premier are to scale those heights once more management may need to turn their attention to team discipline - on Saturday, for instance, five of the six Tipperary defenders (except for Willie Connors) were cautioned while the Premier also conceded 21 frees (Clare 11).

You would suspect that a determination to hit the full-forward line with direct ball and a more disciplined approach may have made Saturday’s task less complicated.

In the opening eight minutes at Cusack Park Tipperary conceded five frees and trailed 0-3 to no-score. Frees from Paddy O’Malley and Barry Keating got Clare off the mark before Dara Walsh set up Keating for a neat effort in the eighth minute.

Although Tipperary initially struggled to win possession in the middle third of the field the Premier threatened to goal as early as the first minute when Tom Kirwan’s cross-field ball picked out Paul Maher, but Clare ‘keeper Cillian Normoyle made a great save to deny the Kilsheelan man before Levi Howard blocked Maher’s follow-up.

Tipperary plundered a goal nine minutes later when Josh Keane picked out Alan Tynan who skipped around Levi Howard before sliding a smashing right-foot effort past Cillian Normoyle to tie up the game - 1-0 to 0-3.

Unfortunately 17 scoreless minutes ensued as the sides shared eight wides before Josh Keane worked a free short to Tom Kirwan in the 27th minute and the Ardfinnan dual star booted over a superb point to hand Tipperary the lead for the first time.

Tipperary closed out the half in powerful fashion with points from Liam Casey (free) and Josh Keane forcing Tipperary into a 1-3 to 0-4 interval with Clare’s Barry Keating responding for the home side.

Two minutes into the second half Tipperary were threatening a goal once more, but Clare ‘keeper Cillian Normoyle made a second wonder save to deny the raiding Tom Kirwan.

In the 34th minute Colin O’Riordan and Kevin Fahey combined to set up Paul Maher for a neat point (1-4 to 0-4) before a Josh Keane free added to the defending champions’ tally three minutes later.

A brace of points from the influential Tom Kirwan and a classy Alan Tynan effort then helped Tipperary into a 1-8 to 0-4 lead by the 46th minute.

Encouraged by an enthusiastic home support Clare pushed for late scores and were rewarded with a Barry Keating free in the 48th minute. Indeed, the Banner were very unlucky not to register a three-pointer in the 51st minute when Keating crashed a great shot off Jack Brady’s right-hand post.

Tom Kirwan, the Premier man of the match, notched his fourth point from play in the 52nd minute while an outstanding left-footed effort from Alan Tynan concluded the scoring from a Tipperary point of view in the 54th minute (1-10 to 0-5).

Clare pressed for late scores and were rewarded with a Barry Keating free, a Liam Madigan point (the Banner’s second from play on the hour mark) and finally a Dara Walsh effort.