Thurles Sarsfields on the U21 march once more 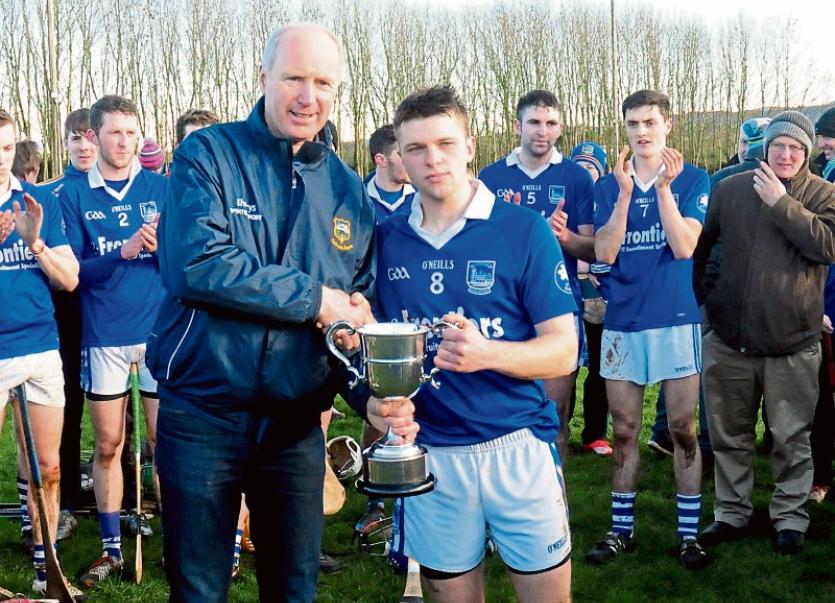 County champions in 2012 and 13, Thurles Sarsfields are in the hunt for a third county under-21A hurling title in four years following this impressive victory over the current holders Loughmore-Castleiney in the Donal and Rose Younge sponsored Mid Tipperary final at Gortnahoe on Sunday last.

The extreme weather conditions of late played havoc with this fixture in recent weeks, but despite the stop-go nature of the build-up to it both sides rose to the challenge in great style to produce a fine contest. Credit too to the Gortnahoe club who had their venue in remarkable condition and staged the final in style.

The honours rest where they rightly belong as Sarsfields had too much in their armoury for their opponents, but Loughmore-Castleiney, as is their tradition, did not make it easy for them, and in the closing quarter in particular, helped by a Tommy Maher goal, chased down their opponents in a brave bid to rescue the crown that at that stage was in serious peril.

Sarsfields had four of their senior regulars in action and crucially they provided the leadership that inspired those around them. Ronan Maher was a tower of strength at the heart of the defence; Billy McCarthy had a storming first half at midfield; Stephen Cahill, his partner, led the way in the second period, while Conor Lanigan was always a threat to Loughmore in attack. Loughmore never got to grips with this quartet, and bravely though they battled, they were not creating serious problems for their rivals.

The opening twelve minutes saw the sides share six points as they settled into the game, Pa Phelan, Conor Lanigan and Aidan Doyle the Thurles marksmen with Lorcan Egan, Peter Neyland and Martin Meagher on target for Loughmore. Then Sarsfields hit three unanswered points from Conor Lanigan, Seanie Butler and Dylan Burke to give the Thurles lads the initiative.

John McGrath hit a huge point from a free inside his own half to keep Loughmore on the move, and he followed with another almost immediately, but a Billy McCarthy goal for Sarsfields in the 22nd minute, after a link-up with Kevin Dunne, gave Sarsfields a significant advantage and they went in at the break leading 1-8 to 0-6.

It was by no means game over, and one felt that Loughmore had yet to get fully into stride, but the third quarter saw Sarsfields get right on top. Four points, two each from Stephen Cahill and Seanie Butler in the opening eight minutes of the second half put them nine points clear, a big lead in the prevailing conditions. JohnMcGrath again countered for Loughmore from a free, but further points from Cahill and Butler, had Sarsfields riding the crest of the wave going into the last quarter, 1-14 to 0-7 clear.

There is always a kick in Loughmore, and after John McGrath again pointed a free, Tommy Maher netted, reacting quickest to the rebound as Sarsfields goalie Willie Tierney stopped a piledriver from Bill O'Connell.

Seven points adrift with eight minutes to play, Loughmore were chasing further goals when points taken would have narrowed the gap even further. John McGrath went very close with one effort, but Sarsfields, though under pressure, continued to defend well and held on to regain the trophy.

No question about the merit of the Sarsfield win. They were the better team and will be hoping to build on this performance in the county semi-finals. As stated the four senior players led the way but such as Jack Derby, Caley Maher, Aidan Ryan, Pa Phelan, Aidan Doyle, and Kevin Dunne were others to play important roles.

Loughmore-Castleiney never gave up but didn’t have the options, particularly in attack, of their opponents. They looked to countyman John McGrath to show the way with Lorcan Egan, Martin Meagher, Tommy Maher, Joseph Hennessy and Joseph Nyland most prominent in support.