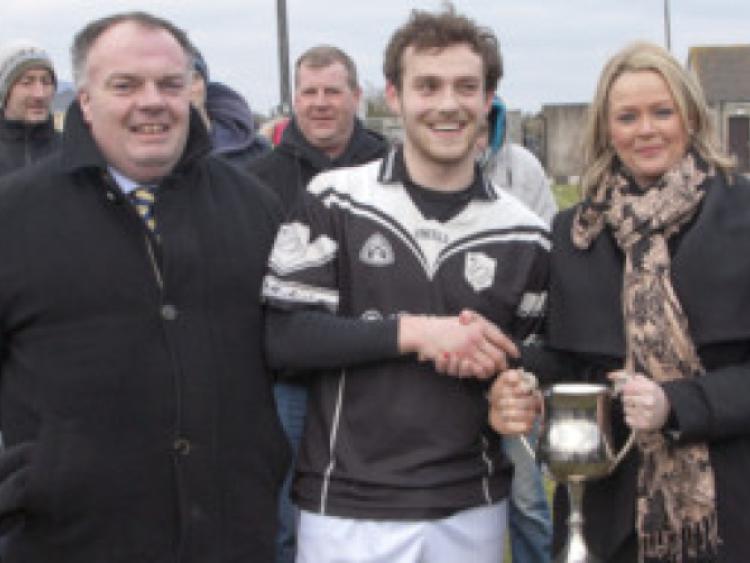 Carrick Swan hit four goals as they beat Killenaule in the South Tipperary u-21 football final at Monroe, 4-7 to 0-10.

Carrick Swan hit four goals as they beat Killenaule in the South Tipperary u-21 football final at Monroe, 4-7 to 0-10.

Playing against the wind in the opening half, it was Killenaule who opened the scoring - some good link up play from Adam O’Connell and Daniel Guinan was rewarded with a Joe O’Dwyer pointed free in the third minute. Killenaule went close on a couple of occasions but Swans took the lead in the fifth minute when a looping Lee Grace shot held up in the wind and a Danny Fitzpatrick flick helped the ball creep under Stephen Ryan’s crossbar.

Killenaule’s response was swift and clincal. A deep penetrating run and quick layoff from centre back James Feehan set up Mark Doyle for Killenaule’s second point. Daniel Guinan added another for Killenaule minutes later before Evan Hogan edged Carrick back in front with a point from close range. Around the 20th minute mark Killenaule began to hit a purple patch, scoring three in a row, all coming from the boot of the impressive Daniel Guinan, Carrick had some respite with a great individual point from Martin Griffin and a free from midfielder Lee Grace.

Another pointed free from Killenaule’s Joe O’Dwyer followed, only after Killenaule had been wasteful with some guilt edged chances. They were made to pay with halftime looming, when a testing Danny Fitzpatrick effort from distance seemed to deceive Stephen Ryan and the ball nestled in the back of the Killenaule net. With Swans’ tails now up Lee Grace added another point to send the sides to the dressing rooms with the scoreboard reading Swans 2-5 Killenaule 0-7.

After the restart Joe O’Dwyer and Martin Griffin exchanged frees before a long period of scoreless, scrappy play ensued. With scores proving hard to come by, Killenaule’s Mark Doyle left just three between the sides when his left footed shot sailed over the crossbar. With the game delicately poised and looking like going to the wire, it was effectively won and lost in a five minute spell in the final quarter. Danny Fitzpatrick took full advantage  of a lapse in the Killenaule defence to send a low drive under the body of Stephen Ryan, giving Evan Hogan the easiest of tap-ins. Swans had sight of the finishing line now, holding on to possesion and controlling proceedings with a new found ease. The Carrick men put the result beyond doubt, with Dean Murphy dispatching the pick of the Swan goals with a powerful finish. Dale O’Mahony sealed Killenaule’e fate with a point two minute from time. An injury time Joe O’Dwyer point from a free was scant consolation for Killenaule, who seemed to self-destruct after half time. They will feel unforced errors cost them dearly and to be fair the nine-point margin was probably an unfair reflection of their efforts. They kept going to the end and had admirable performances from James Feehan, Daniel Guinan and Joe O’Dwyer, particularly in the first half.

However one most credit Carrick Swans, who having experienced a very difficult time recently, showed great spirit and determination and were worthy winners. Great performances from Lee Grace, Danny Fitzpatrick and Evan Hogan complrmented a fine overall team performance.