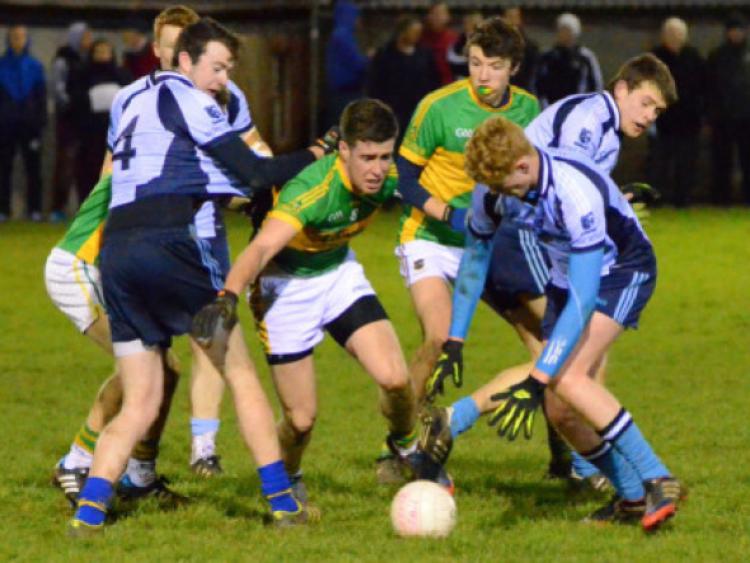 After nine minutes of the game a win for the defending champions looked highly unlikely as they trailed by seven points. Moyle Rovers were completely on top in the early exchanges and but for a first minute goal line clearance by Paric Looram it could have been even worse for Commercials.

Corner forward Kieran Luttrell goaled in the second minute to give Rovers a tonic start. The centre field pairing of Stephen Quirke and Luke Boland were in complete control and caused problems for the Commercials defence as they set up the forwards with some excellent ball.

Quirke pointed from a free in the 8th minute before he dispatched a penalty to the net a minute later. Commercials were completely out of the game at this stage and needed to get to grips with their opponents if they were to make a game of it. Slowly Jack Kennedy began to influence the game and with Pauric Looram also coming to the fore, Commercials’ challenge gradually begun.

Centre back Kevin Fahey had a goal on his mind as he carried the ball forward in the 12th minute but his shot blazed over the bar for his side’s first score. Looram goaled a minute later as the game ignited. Scores were at a premium as both sets of backs stood strong. Wing forward Dominic Walsh pointed for Moyle Rovers three minutes from the interval. Commercials finished against the breeze strongly and late points from Brian Walsh and Jason Lonergan narrowed the margin to just two points at the break

The sides were level for the first time six minutes into the second half following points from Stephen Kelly and an excellent free from the sideline by captain Jason Lonergan. Parity was short lived however and points from Ross Mulcahy and Luke Boland had Moyle Rovers in front again as the game entered the final quarter.

Commercials were not to be denied though and within two minutes Sammy Ryan had Commercials ahead for the first time. A point in the 15th minute was followed a minute later when the corner forward latched onto a loose ball and sent it to the net. Now the resolve of Moyle Rovers was being tested and they responded magnificently. Points from the midfield pairing of Luke Boland and Stephen Quirke tied the game up again with eight minutes remaining.

The rivalry of these two clubs was evident as neither set of players were willing to yield. The tackling was hard and fair and at times the football was excellent. With the sides level and just two minutes remaining a draw looked the likely result. When Commercials were awarded a free outside the 45 metre line there seemed little immediate danger. Centre forward Paudie White kicked from the hands and his kick was terrific as it sailed high over the cross bar.

There was no reprieve this time for Rovers as Commercials held on to win by a single point. Well done to both sets of players for delivering a game of this quality in difficult conditions. If these sides meet again in the knockout stages it will be one hell of a game.