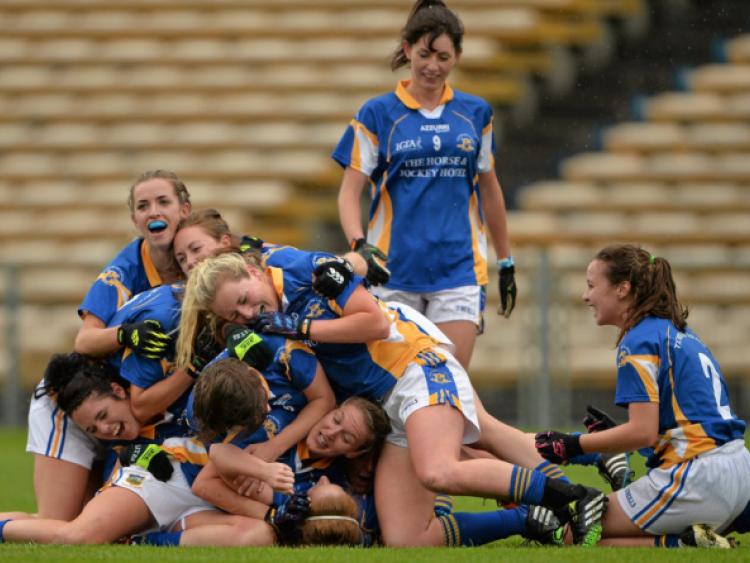 Semple Stadium, Thurles hosted the TG4 All Ireland Ladies Football Intermediate Championship Semi Final on Saturday last and it was a game with the most dramatic of endings.

Tipperary who never actually led in the game took the victory from Fermanagh by one point in the last minute of the game when Claire Carroll and Niamh Lonergan combined to score a goal and two points.

Fermanagh looked to have the game in hand when had built their lead up to eight points at the start of the fourth quarter but Tipperary were tireless and never gave in.

Fermanagh settled quickly and opened the scoring with three points from Caroline Little followed by another from Shauna Hamilton to lead by 0-4 to 0-0 after ten minutes. Mairead Morrissey in the twelfth minute scored Tipperary’s first point and Tipperary had a few more missed chances before Edel Hanley pointed a free in the 23rd minute. In the 25th minute Niamh Lonergan scored their third point, this would be the closest Tipperary would come to Fermanagh in the game until the last minute.

The first sinbin of the game came for Marita McDonald, Fermanagh in the final four minutes of the first half. This did not deter Fermanagh in any way and Aisling Moane scored a goal from a Marcella Connolly knockdown. Fermanagh would add another point to the scoreline to go in at half time with a five point lead, 1-5 to 0-3.

Fermanagh goalkeeper Róisín Gleeson denied Tipperary full-forward a goal scoring chance early in the second half when she made a good save. Shellagh Carew followed this with another goal chance for Tipperary which went over the bar followed quickly by a pointed free by Edel Hanley. The next two points would go Fermanagh’s way while Tipperary would only score one point. The game looked over as a contest when in the 44th minute, Fermanagh’s Caroline Little scored a goal to give Fermanagh an eight point lead.

Despite this set back, Tipperary never relented and from a throw up ball Mairead Morrissey scored a remarkable goal in the 49th minute to give Tipperary some hope. Edel Hanley narrowed the margin to three points when she pointed a free in the fifty first minute. The second sinbin of game was for Kyla McManus, Fermanagh and Tipperary’s Gillian O’Brien would join her within seconds leaving both teams down to fourteen players with only five minutes left in the game. As the game entered injury time, Fermanagh stretched their lead to four points and the game looked as good as over. Alas, the final script had yet to be written. Niamh Lonergan scored a point to bring the score difference down to three points with a minute remaining on the clock Claire Carroll won the kick out and lobbed it over Fermanagh goalkeeper Róisín Gleeson’s head into the back of the net, this was the first time the teams would be level in the game. With only seconds on the clock, Mairead Morrissey won possession from the resulting kick out and passed quickly to Niamh Lonergan who swiftly took aim and kicked a high ball towards the Fermanagh goal. The full time hooter then sounded only for Lonergan’s goalbound shot to dissect the posts for the winning point of the game amid wild celebrations by the players, mentors and supporters.