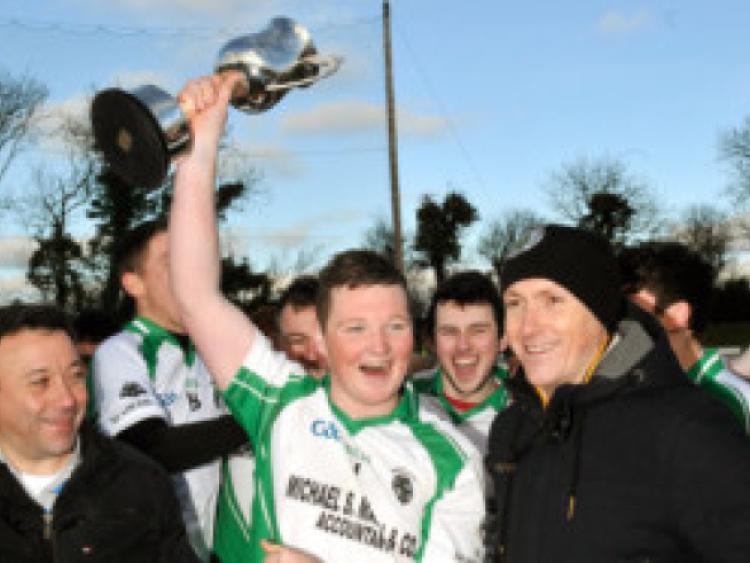 The Abbey CBS Tipperary powered their way past Bandon’s Hamilton High School in the Munster Post Primary Schools Senior Football Championship B inal to qualify for the All-Ireland semi-final against Ulster opponents on March 28.

The Abbey CBS Tipperary powered their way past Bandon’s Hamilton High School in the Munster Post Primary Schools Senior Football Championship B inal to qualify for the All-Ireland semi-final against Ulster opponents on March 28.

In a game of no little skill and physical endeavour the Abbey school lifted the Noonan Cup when they took a fourth Cork scalp in this competition in Saturday afternoon’s final in Mallow.

They had already defeated St. Colman’s Fermoy, St. Declan’s Rosscarbery and Coláiste an Spiorad Naomh Bishopstown en route to the final. Bandon were a highly regarded outfit that had previously recorded victories over Listowel, Rockwell College and St. Augustine’s Dungarvan. Though Hamilton High School were slight favourites the Abbey carved out a magnificent victory and were the first school to put their names on the recently presented Denis Noonan Cup. This was the seventh time the Abbey had won this competition and they now lead the roll of honour.

The Tipperary school laid the foundation for victory in the first half. The first quarter exchanges were tight, with scores at a premium. The Abbey, playing against the breeze, defended heroically and attacked with a sharp cutting edge. They kept their shape and played the sweeper system to their advantage. Two goals from Daire Egan at the beginning of the second quarter proved the turning points. However credit must also go to Callum Fanning for marvellous goalkeeping. Fanning guessed right to save a penalty and brought off three other wonderful saves in the final quarter to keep the Cork school at arm’s length. Indeed the ten-point winning margin wasn’t a fair reflection of the difference between the sides. Hamilton High School would have been much closer on the scoreboard only for their early obsession looking for goals and squandering gilt-edged point chances in the second half.

Cathal Maguire opened the scoring with a first minute point for Hamilton. Daire Egan replied for the Abbey with a score from play before points by Luke Meade and Eoin O’Reilly put the Cork side into a 0-3 to 0-1 lead, with Shane Neville pointing to reduce the deficit.

Then Abbey seized the lead. After Tommy Lowry put Josh Ryan through he was hauled down in the square and Daire Egan converted the resultant penalty. Cathal Maguire replied with a pointed free. The Abbey’s second goal came in the 17th minute and it was a wonderful individual effort from Egan. He danced his way past four Bandon defenders and rolled the ball into the corner of the net after good link-up play from David Byron, Tommy Lowry and Shane Power.

After eighteen minutes the Abbey led 2-2 to 0-4. In this short period they went from two down to four up and were never led from here on. Points from captain Keith Landy and Brian Fanning increased the Abbey lead and Cathal Maguire added a pointed free for the Bandon boys before half time. In injury time, following some indiscipline, both sides were reduced to fourteen men when they each had a player harshly sent off, as the Abbey led 2-4 to 0-5 at the break.

Immediately after the interval Josh Ryan and Cathal Maguire swopped points. However despite their best efforts the Hamilton High School didn’t raise a flag for the next twenty minutes. This was in the main due to a gritty, determined and close-marking Abbey defence, ably marshalled by the magnificent Shane Power and Tommy Lowry, who soaked up the Hamilton pressure and came forward to launch attacks.

Josh Ryan and Daire Fanning were also controlling matters around the middle third as Bandon felt the loss of Jonathan Mulcahy from this sector. Shane Neville, Daire Egan and Shane Power added points for the Abbey and after forty minutes the Tipperary boys led 2-8 to 0-6. Things were not going well for the Bandon boys, and then to add to their frustration Colm Dineen failed to convert a penalty after forty one minutes. Andrew Vance pointed a free from the sideline for the Abbey and Cathal Maguire replied with a pointed free after fifty three minutes. In the final eight minutes shots from Chris O’Leary and Darragh Curran were dealt with at the expense of 45s by Callum Fanning, and Shane Ryan deflected another goalbound shot out of danger. With three minutes remaining Andrew Vance goaled to finish the game with a flourish after being expertly set up by Shane Ryan. Chris O’Leary had a point for Hamilton before the long whistle but the Abbey boys ran out deserving winners.

The Abbey were full value for their victory. They played a crisp brand of football throughout and can look forward to an All-Ireland semi-final date in late March. They have a team packed with talented, pacy individuals and a workrate that allows them play a high tempo game. It was a very good all round team performance from the Tipperary Town boys. After the game the Denis Noonan Cup was presented for the first time to Keith Landy by the sons of Denis Noonan, Donagh and Mark. The Abbey team are coached by Damian O’Brien and Noel Kilcoyne.