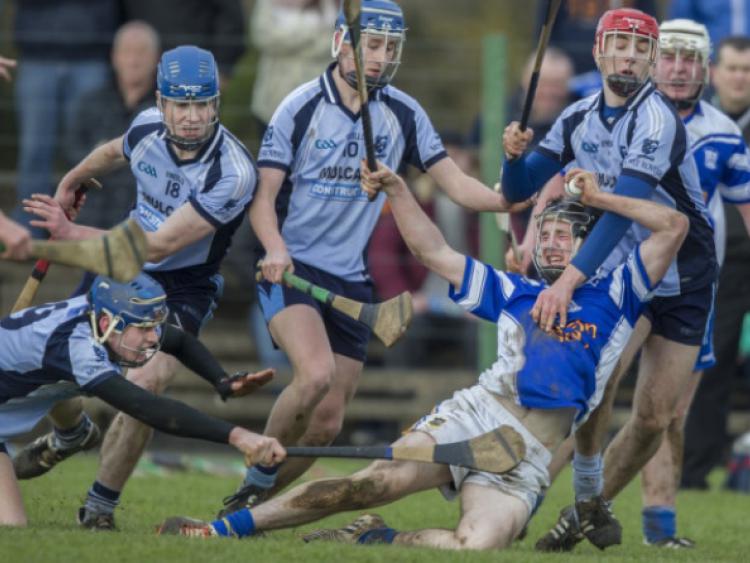 What a hurling year 2014 has been for Moyle Rovers with a second county crown captured on Sunday last by virtue of a hard-fought victory in the U/21 ‘B’ final against Cappawhite/Sean Treacys.

What a hurling year 2014 has been for Moyle Rovers with a second county crown captured on Sunday last by virtue of a hard-fought victory in the U/21 ‘B’ final against Cappawhite/Sean Treacys.

Like the proverbial bus you wait ages for one to come along and then suddenly two come together. And so it has been this year at minor and under 21 hurling for the Powerstown/Lisronagh club. Up to 2014 they had never won a county title at either hurling grade, and suddenly in the space of four months they capture minor ‘A’ and under 21 ‘B’. What an achievement for what most GAA followers would regard as a football stronghold.

Sunday’s final at Leahy Park in Cashel finally brought the 2014 county fixtures to a conclusion and fittingly the clash of the South and West champions produced an exciting and entertaining finale to the year.

There was nothing to separate the sides in the early stages and after 12 minutes they were locked level at 0-3 apiece.

With the benefit of the breeze at their backs Rovers opened the scoring in the first minute with a fine point on the run from David Roberts. Sean Ryan (ST) at centre-field had his side’s first score in the fourth minute when seizing on a cute backpass from a Brian Carey free.

Stephen Quirke pointed Rovers in front again before a pair of excellent frees from Sean Ryan (ST) from either side of the field (and 65 metres out) put the combo ahead for the first time on 10 minutes.

Rovers then clicked in to gear and a five minute purple patch of 1-4 without reply put them in the ascendency.

Dara Ryan with a free and then a fine point from play edged the Monroe side ahead.

Then came the game’s  only goal. A long free from centre-back Ross Mulcahy was eventually gathered by Tadgh Fitzgerald who shortened his grip in a congested goalmouth to blast home.

A further point from Morgan Irwin after good work by Shane Lonergan and Brian Gleeson put Rovers 1-6 to 0-3 ahead after 16 minutes.

The West side responded to the challenge and with Sean Ryan (C), Sean Ryan (ST) and Kevin Stapleton in particular hurling well they narrowed the gap with the next four points.

After the inspiring Sean Ryan (ST) was fouled going through Brian Carey pointed the free to set the comeback in motion.

Corner-forward Brian Carew then made good room for himself to send over a nice point off his left. And quickly another move from one side of the field to the other saw Pat Deegan score another rallying point for Cappa/Sean Treacy’s.

Kevin Stapleton at centre-forward for the combination side was causing a lot of trouble for Rovers, particularly since the solid Kevin O’Donnell of Rovers was forced off injured. A 27th minute free won by Stapleton was converted by Brian Carey to make it a two-point game.

The concluding score of the half was for Rovers, scored by Morgan Irwin, but full credit to Shane Lonergan for fielding high and taking a heavy knock before laying off for the score.

On the resumption, Rovers stole a march on their opponents with four pointed frees inside six minutes to stretch the lead to seven. Tadgh Fitzgerald had the winning of the first two, both converted by the deadly accurate Dara Ryan, followed by two frees from distance by Stephen Quirke.

Halfway through the second period Rovers were still seven to the good at 1-12 to 0-8 after Brian Carey and Stephen Quirke swopped frees.

But the West boys were not going to lie down easily.

Moyle Rovers’ captain Aidan Butler was bizarrely sent off on 45 minutes. The referee initially moved the sliothar 10 metres upfield for dissent and with his back turned a Cappa/Sean Treacy’s player pushed it a few metres further on. The Rovers captain nudged it back, and was spotted by the ref doing so. Adding to his earlier yellow, Butler was dismissed and Rovers were a man down against the stiffening breeze for the remainder of the game.

And the West side seized the initiative with some excellent hurling and long range points.

Sean Ryan (C) started their second fightback with a pointed free that Rovers’ corner-back Paddy Morrissey did well to keep out of the net.

The two Sean Ryans were coming more and more into the game and they shared the next three points with the midfielder from the Treacy’s club getting two and the Cappawhite centre-back the other from a long way out.

Moyle Rovers sub Craig Condon, on the field just a few minutes, put over a superb long range point from the stand side to give his side their first score in nine minutes.

Still the combo side kept coming. Centre-back Sean Ryan (C) stood up like a true leader at this stage. On 26 minutes he pointed a free from half-way. And dragging his team by the scruff of the neck scored a great point from play a minute later to narrow the lead further. Another free by the same player in the 60th minute from 45 metres out left it with just a single point between the sides.

In a hectic extended period of five minutes time added-on Moyle Rovers somehow survived and it was Stephen Quirke who had the last point of the game from a free in the 65th minute to herald the final whistle.

Magnificently Moyle Rovers had survived the gallant onslaught to make double hurling history for the club.

For the winners Ross Mulcahy was their leader on the day from centre-back, ably assisted in defence by Brian Norris and Shane Luttrell, with Paddy Morrissey’s goal-line intervention for a deflected point crucial. Shane Lonergan worked himself into the ground at midfield with Brian Gleeson while Stephen Quirke, Morgan Irwin, Tadgh Fitzgerald and Dara Ryan from placed balls contributed greatly.

It was a case of so near yet so far for the Cappawhite/ Sean Treacy’s boys who made a great game of it, never throwing in the towel even when seven points down. Both Sean Ryans were outstanding on the day, closely followed by Kevin Stapleton. Willie Mackey at full-back did well and others to stand out were David Stapleton, Andy O’Brien and Emmet Ryan. Hitting eight first half wides didn’t help and the concession of early second half frees was punished to the maximum by Moyle Rovers.