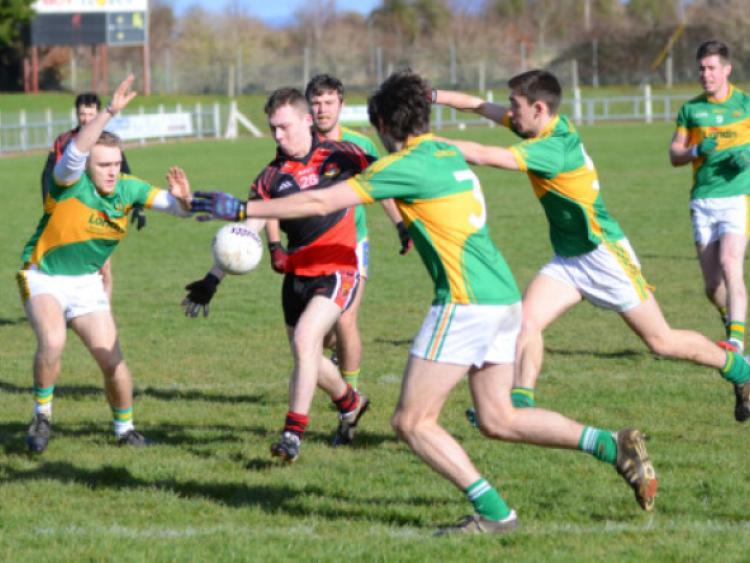 Three goals in five minutes was the difference between Commercials and Ballyporeen in this South under 21 championship game at Ardfinnan on Saturday afternoon.

Three goals in five minutes was the difference between Commercials and Ballyporeen in this South under 21 championship game at Ardfinnan on Saturday afternoon.

Ballyporeen, who were champions in 2013, gave a good account of themselves and caused huge problems for the reigning champions in a hugely spirited display.

Commercials played with the aid of a strong breeze in the opening half but struggled to assert any authority against a dogged Ballyporeen side. The Clonmel side were guilty of wasteful shooting in the opening 20 minutes and registered six wides in this period. They opened the scoring in the 7th minute when Jason Lonergan pointed. Ballyporeen responded through John Martin two minutes later to level matters.

There followed eleven scoreless minutes where Commercials were largely on top but poor decision making and some poor shooting resulted in the sides being level on a single point each in the 20th minute. A goal for Sammy Ryan ignited his side and there followed two further goals in the next five minutes. Richie Gunne was fouled a minute later which resulted in a penalty which was dispatched to the net by Michael Nugent.

Having struggled in front of goal early on Commercials now suddenly led by six points. John Ryan pointed for Ballyporeen before Sammy Ryan got his second and his side’s third goal in a blistering five minute period. Two further points for Commercials saw them lead at half time by ten points.

With the breeze dying somewhat, Ballyporeen thundered into the second half and had a penalty converted by Fionnan O’Sulivan in the first minute. Eamon Cahill followed up for Ballyporeen with a good point a minute later as his side brought the fight to Commercials. Jason Lonergan pointed for Commercials in the 5th minute but at this stage it was Ballyporeen who were dominating proceedings and when Fionnan O’Sullivan goaled in the 15th minute the margin was down to just two points.

A huge upset was on the cards as Ballyporeen threw down the gauntlet. Paudie White pointed from a free for Commercials a minute later to settle his side but Ballyporeen were not about to lie down and again reduced the lead to two points when John Martin pointed. There were several attacks by Balyporeen in the final minutes of the game but no score came and Commercials saw out the game with points from Jason Lonergan and Paudie White.

The last 10 minutes of the first half which saw Commercials outscore their opponents by 3-2 to a point was the difference and while Ballyporeen will take encouragement into the final two rounds, Commercials will need to improve on this showing if they are to succeed in the defence of their title.