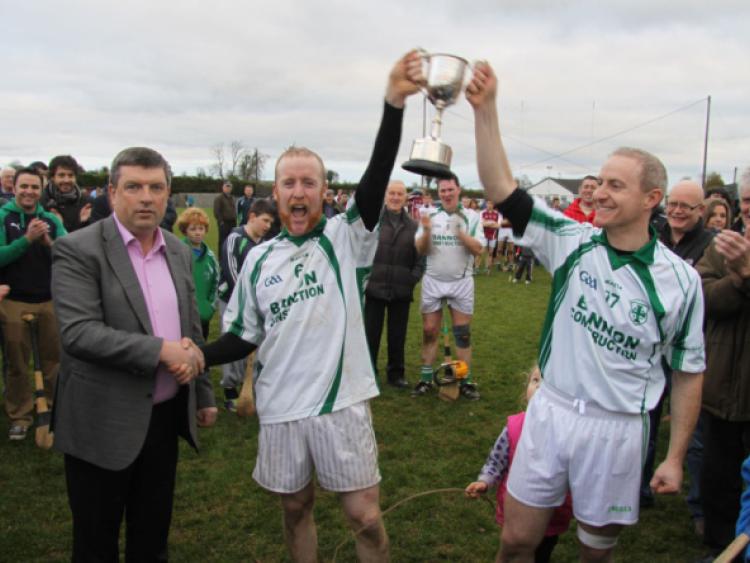 A late surge rescued Holycross-Ballycahill in the drawn Clean Ireland Recycling county junior hurling B final but in the replay at The Ragg on Sunday last they were “trap-to-line” winners getting the better of Templederry by four points in an entertaining encounter.

The win was fully deserved as from start to finish Holycross-Ballycahill were the better side but a tenacious Templederry fifteen never gave up, and it took points by Paudie Comerford and Donal Duggan in the closing two minutes to finally set the seal on a first county title at this level for the Abbeysiders.

Holycross set down an early marker as Donal Duggan whipped over a point inside a minute, an indication of their earnestness. They went on to lead 0-10 to 0-7 at the break, four of their forwards scoring in that period which was in marked contrast to Templederry’s lack of fire-power up front. They were relying on free-taker Donal McGrath to keep them in touch, and he obliged with five of their first half-points. Michael O Leary, who was having a big impact at midfield, and James Hogan, his partner, registered the other points.

It was Holycross’s half however, and with the experienced Brendan Ryan and John Fogarty leading by example, and the busy Kevin O Dwyer, and Dan Fennessy also contributing handsomely to the cause, they ought to have been more than three points ahead at the break.

Paudie Comerford was on song with his frees, scoring four in the period, with Brendan Ryan, Kevin O Dwyer, Mark Fogarty and Dan Fennessy(2) supplying the other points after Donal Duggan’s opener. Holycross might have had a goal in the 22nd minute when, leading 0-8 to 0-5, Kevin O Dwyer got through but Templederry goalkeeper, Joe Shanahan confidently dealt with his effort.

Having been rather subdued in the first half, one expected Templederry to raise their game after the break and this they did but once again their lack of penetration in attack was their downfall and they finished the hour with only one forward scoring, Donal McGrath, all but one of his nine points coming from frees.

In a lively second half Holycross guarded their three points interval advantage well, never being less than two points in front before finishing strongly for a four points win. Donal McGrath pointed a Templederry free after two minutes but Paudie Comerford cancelled it out a minute later. Then James Hogan for Templederry and Denis McCullagh for Holycross swapped points, before Michael O Leary(Templederry) and Kevin O Dwyer did likewise by the 42nd minute, leaving Holycross still three ahead.

Another exchange between McGrath and O Dwyer followed before Mark Fogarty extended Holycross’ advantage to four entering the last quarter. Templederry were hanging in there, McGrath pointing a 50th minute free to which Holycros sub John Dunne replied two minutes later before McGrath, again from a free, cut the lead to three points with five minutes left.

Michael O Leary bagged his third point for Templederry with three minutes to go. It was clear that they were not going to make up the deficit through points and that a goal was required but they never really threatened Tadgh Bourke in the Holycross goal, and it was Holycross who finished the stronger, points by Paudie Comerford from a free, and Donal Duggan extending their lead to four by the final whistle.

After their disappointment in the county minor final this win was a considerable consolation to Holycross-Ballycahill and finished their year on a high note. It remains to be seen what significance the victory will have in the longer term for the club but for now it a success to be celebrated and savoured.

Most disappointingly for Templederry, they did not do themselves justice on the day that mattered most and will feel they left the championship after them in the drawn game.