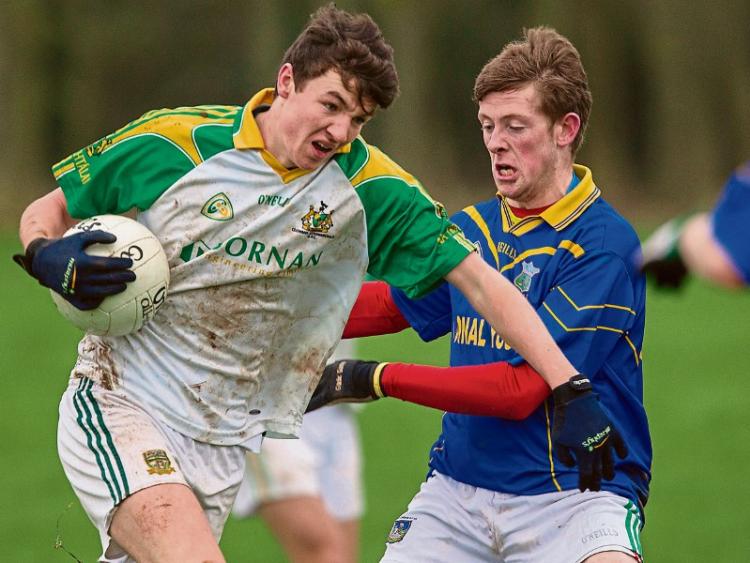 Clonmel Commercials' long reign as county minor football champions came to a disappointing end at Gortnahoe on Saturday last with defeat to Drom/Inch in an entertaining county final.

Bidding for a sixth consecutive county title, the Clonmel side had to give way to a stronger and more cohesive Mid Tipperary outfit who were capturing their first-ever title on an historic day for 'The Ragg' clubmen.

Like all extended undefeated runs in sport, this one too had to come to an end at some juncture, and while Commercials battled hard all through, there could be no denying that Drom/Inch were fully deserving of their victory on the day.

Over the past couple of years the Mid side felt they were closing the gap on Commercials' superiority, with gallant defeats to the South side at under 16 and minor level in recent years. Drom/Inch reckoned beforehand if there was ever going to be a day to topple the county champions, last Saturday was it. And so it proved in the end.

Switched from Littleton to Gortnahoe, the game produced an entertaining contest right through in testing underfoot conditions.

Clonmel Commercials started looking the more positive side but a couple of chances including a goal effort by Michael O'Reilly after two minutes yielded nothing.

Drom/Inch playing down the slight hill had the first point of the game, a free from a difficult angle off the ground, by Stevie Nolan on four minutes.

The Drom/Inch diamond of Emmet Moloney, Tommy Nolan, Stevie Nolan and Jamie Bergin slowly began to gain a grip around the centre and after Tommy Nolan was fouled going through Michael Connors kicked his first free of the day to put his side two ahead after seven minutes.

A minute later came the game's first point from play and it went the way of the Mid champions also. A storming run through the centre by Tommy Nolan set up fellow county minor Jamie Bergin to score off his left boot.

Michael O'Reilly, by far his side's best performer on the day, got Commercials up and running after 11 minutes, the score nullified quickly by a Michael Connors free when Commercials were penalised for a late tackle on a Drom/Inch player.

Clonmel Commercials' senior player Jack Kennedy brought the lead back to two points in the 18th minute, when he worked a quick '45' back to himself to score.

Drom/Inch were definitely enjoying the lion's share of the possession now - as they did all day - and after Michael Connors missed a close-in free, he made up for it almost immediately in the 27th minute when converting from a more difficult angle.

The best point of the first half came just before the interval, Michael O'Reilly narrowing the gap for Commercials to two points with a mighty kick from 40 metres.

At 0-5 to 0-3 and having had the greater territorial advantage for the opening half hour, Drom/Inch would have felt they could have been better placed at half-time. The reigning champions on the other hand would have realised they were still close enough without having hit the high standards of previous games. It was very much still to play for.

Commercials threw down the gauntlet at the commencement of the second half but the inside backline for Drom/Inch - Colm Kinane, Paraic Campion and Paul Bergin stood up magnificently then and all through.

It took Commercials all of 10 minutes to reduce the gap; a move started at centre-back by Kyle Peters was superbly finished from a difficult angle by Michael O'Reilly.

A minute later, Ryan Lambe, well marshalled all day, got loose for once, to kick the equaliser at 0-5 to 0-5.

The momentum seemed to be slowly swinging the way of the six-in-a-row seeking Commercials but the challengers were not for turning this time.

After an extended period of passing the Mid side, patiently worked the ball through to John Ryan and he fisted his side back in to the lead - Drom/Inch were never once in arrears all day.

Spurred on by Ryan's lead point Drom/Inch rallied again. A straight line run through the middle by wing back Kevin Hassett yielded a free and Stevie Nolan converted for a 0-7 to 0-5 lead for the Mid side, incidentally wearing Tipp jerseys on the day due to the colour clash.

With 10 minutes remaining Kyle Peters, who never stopped in his efforts for the Clonmel side, won a free which Michael O'Reilly tagged on to reduce the deficit to the minimum as neither side were prepared to step back.

But it was the challengers who would finish the stronger powered on by the Nolans around the middle and captain Emmet Moloney coming more to the fore as the decider developed.

Three unanswered points in an eight minute spell were to finally wrestled the Hogan Cup out of Clonmel Commercials hands for the first time since 2010.

Hassett was yet again involved in the next point, breaking from defence once more to run at the heart of the Commercials backline and set up Michael Connors to kick Drom/Inch three clear.

And finally, the insurance point, which in its creation typified the tremendous spirit of 'The Ragg' boys on the day. Captain Emmet Moloney took a ball from underneath his own crossbar to initiate the move. Stevie Nolan then ran a beeline through the heart of the Commercials centre to fist over for an unassailable four points lead. The coaching of the Mid men very obvious in their style of play and execution of the patient and fisted score all day.

Two minutes into added time Michael O'Reilly added a consolation point with a left footed effort for Commercials. In true character they had fought bravely to the very end but on this occasion it was not to be their day.

Full credit to the history-making Drom/Inch Club on their first success at this level. It was an almighty team performance from the underdogs, each and everyone contributing, the so-felt lesser lights emulating the county minor men.

As stated, the inside backline were terrific all through; Kevin Hassett was a thorn in the side of Clonmel with his testing runs from half back, while the Nolan cousins, the Bergin brothers, Michael Connors and John Ryan all did magnificently also.

Credit also to team manager John Hassett and his backroom team of Paul Collins, Teddy Kennedy and Johnny Ryan for their part in creating club history.

For a disappointed Commercials, it signalled the end of an amazing achievement. Somehow they never seemed to spark on the day and looked tired in many cases against a talented opposition. Darragh Phelan, Gavin Ryan and Kyle Peters manned the defence solidly; Jack Kennedy and Ross Peters were up against their county teammates around the middle and found it a test; while upfront Michael O'Reilly with his five points was the only one who really looked like he could deny Drom/Inch.