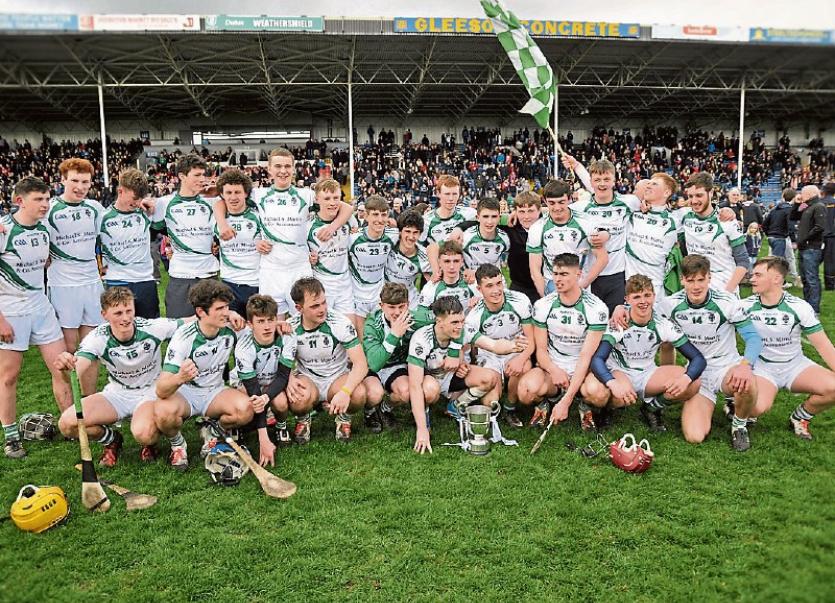 Two goals in the closing three minutes of the second half of extra time swept Abbey CBS to a thrilling victory over St Louis’ Grammar School, Ballymena, Co Antrim at Semple Stadium on Monday in a classic All-Ireland Post Primary Schools senior hurling B final.

The Tipperary town boys may have left it late to claim their third title in the grade and first since 2002, but they richly deserved their win in a contest in which they came good in extra time, having struck two points in the closing stages of ordinary time to send the game into the extra twenty minutes.

St Louis may have been outsiders going into the contest but they showed themselves to be an accomplished outfit, skilful and courageous and fully deserving of their place in the final. Their performance might well have brought success against lesser opposition but in Abbey CB they came up against a top-class outfit who would not have been out of their depth in the A grade.

While it is fair to say that a six points victory flattered the Tipp town lads, the merit of their win was not in dispute as when it mattered most they were the better

It was gripping stuff all the way but in the second half of extra time, there was only one team in it, Abbey’s superior strength and fitness driving them on to a memorable win that thrilled their supporters.

In an incident-packed encounter the pattern was set from the start as the two side matched each other score for score. Both sides used an extra defender and after fifteen minutes they were deadlocked at 0-3 each, Rian Doody, Shane Power and Kevin Franks, the Abbey marksmen.

In the 19th minute St Louis got an important break when Ronan Graham finished to the net after good work by Eoin O'Neill and Ciaran Elliot. James McNaughton added a point for them but Abbey responded with points from a Doody free and Josh Ryan.

In the 27th minute, after Abbey had a narrow escape as St Louis twice threatened a goal, the Tipp town lads broke upfield but Shane Power blazed wide from a great chance that had goal written all over it.

St Louis’ had two more points but the last score of the half came from Daire Egan for Abbey to leave them trailing 0-6 to1-6 at the break with ground to make up in the second half.

What an absorbing second half it was as Abbey battled mightily to make up the leeway against opponents who showed admirable determination not to give ground.

Three times, Abbey cut the lead to a point but each time St Louis’ pulled away again until in the 52nd minute Rian Doody pointed a free to level for Abbey at 0-13 to 1-10, Kevin Franks and Shane Power grabbing the others. Before the finish, James McNaughton had a great chance of a winner for the Antrim team but was off target, much to the relief of Abbey fans and players.

And so to extra time.

In the 3rd minute Shane Power had a great effort for goal smothered by the St Louis goalie Ryan Elliot, and from the clearance Eoin O 'Neill pointed for the Northerners. Back came Abbey with a brace of points from Rian Doody, and, after McNaughton had pointed for St Louis, Doody added another to give Abbey a slight advantage at the break,0-16 to 1-12.

Anybody’s game as McNaughton levelled for St Louis a minute after resuming but then Abbey took control. Shane Neville restored their lead; Kieran Breen and Josh Ryan extended it to three points with four minutes left. Daire Egan who had come back on blasted home an Abbey goal in the 77th minute after good work by Shane Power to put Abbey in an almost unassailable position but there was no chance to relax as in the 80th minute Ronan Graham banged home a St Louis goal to leave three points in it with added time to come.

In injury time Shane Power set the seal on the Abbey win with their second goal bringing the curtain down on a magnificent campaign that sees the Paddy Buggy cup return to the Tipperary town academy.

There was delight all round for Abbey CBS as the fourteen year wait for All-Ireland honours at this level ended. It was a fitting reward for all the hard work that had gone into preparations by both players and management who this week are rejoicing in the glory of their endeavours.

It was a glorious day for the school, with centre halfback Josh Ryan from Doon and sharp-shooter, Rian Doody from Cappawhite the chief architects of the victory. Huge in stature and heart, they showed the way for their team mates with Stephen O 'Brien, Tommy Lowry ,Shane Power. Kieran Breen, and David Byron most prominent.

It was hard luck on St Louis’ who contributed enormously to a quality final. Sean Elliott, James McNaughton, Cathal McMullan Ryan McGarry and goalkeeper Ryan Elliot were their stars in a performance that against lesser opposition would have brought top honours.